Coming in March: HP Updates in a Big Way

It's fair to say the refreshes HP announced for their consumer computers earlier this month seemed fairly lackluster. While nobody can complain about improved notebook speakers and the triumphant return of dedicated mouse buttons, there wasn't anything else remarkably fresh or exciting about their spring line. When we got a chance to meet with HP representatives in San Francisco to see their new business lineup, however, we saw very nearly the complete opposite.

HP's EliteBook and ProBook lines have undergone a major overhaul since the last time we looked at them, which wasn't very long ago. The last one we saw was fairly attractive but seemed somewhat schizophrenic in its aesthetics, like a hodgepodge of elements from enterprise and consumer lines that didn't blend together. It was the notebook equivalent of the American version of The Ring, appropriating scenes from its predecessor while gracelessly trying to integrate new material.

That's not the case with the new lineup. HP's designers have produced what have to be some of the most stylish notebooks we've seen, marrying some of the better trends in consumer notebooks to thoughtful, modern-looking engineering and design. You could argue they're cribbing from Apple a little bit, but that would do them a disservice. 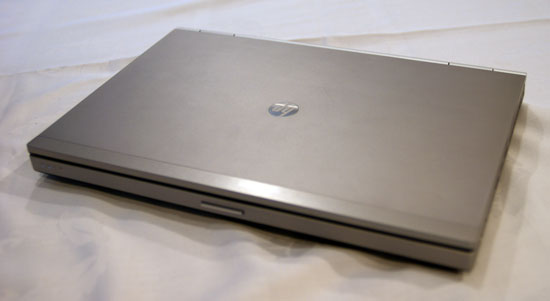 HP is using aluminum on the lids of all of their new enterprise notebooks along with a single piece of machined aluminum for the interior panel with the ports cut into it. Internally they've employed a magnesium alloy chassis, and together with the aluminum shell these notebooks feel incredibly rigid and durable. In fact, in addition to having a mag-alloy backplane for the screen, HP also uses rubber padding between the bezel and screen to ensure it never compresses against the keyboard the way some cheaper notebooks can.

That keyboard is spill-resistant, with channels built into the frame beneath it, though depending on how you feel about the keyboards HP employs on their consumer line you may be pleased or disappointed to see the same  chiclet-style keys on their enterprise-class kit. They've also gotten rid of touch-based buttons along with pretty much the entire control bar above the keyboard, instead replacing it with a couple of actual quick-access buttons. It's a decision that simplifies the look while improving usability.

What was probably my personal favorite feature had to be the bottom panel mechanism they're using on these new notebooks. Check this out: 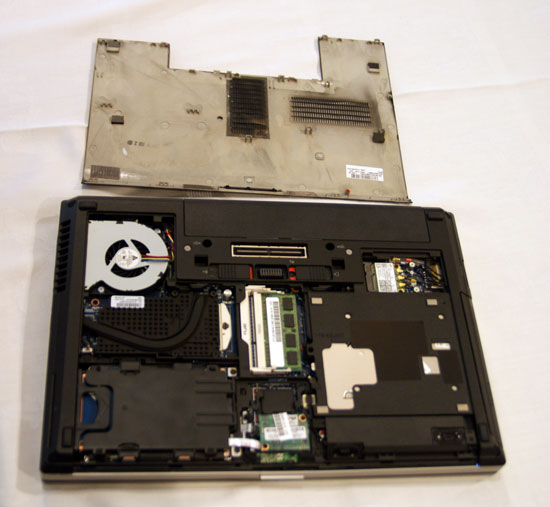 The bottom panel of the notebook is a single large piece that can be removed by simply squeezing a latch and sliding it off, allowing for easy access to all of the internals. It's such a smart idea that one wonders why we don't see it more often—we'd love to get such a feature on more consumer laptops! And for the IT people that don't want to worry about employees popping it off and potentially damaging the components, the mechanism can be locked by installing a single screw. Most people probably won't get that much mileage out of something like this, but it does make the notebook easier to service, along with being easier for people like me (and at least a couple of you) to tinker with.