As SATA Express never took off because of the two-lane limitation, the SSD and motherboard industries have been looking for an alternative connector for connecting 2.5" SSDs over PCIe. SFF-8639, which is essentially SATA Express on steroids with support for four PCIe lanes, has been viewed as the most potent connector because it already has industry support in the enterprise space and with the SSD 750 Intel brought the SFF-8639 connector to the client side. Given that SFF-8639 isn't a very consumer facing name (even I've had trouble remembering the numbers), the SSD Form Factor Working Group has decided to rename the connector as U.2 to make it more marketable. That coincides well with M.2 that has already been used in the industry for a couple of years and more importantly both connectors now carry alike naming. 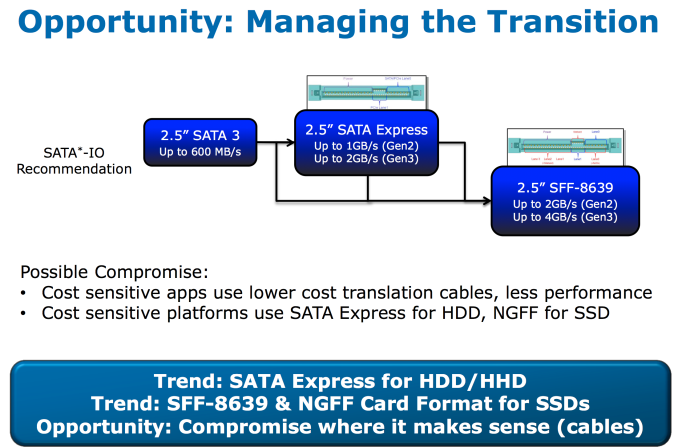 Whether U.2 and 2.5" PCIe SSDs take off in the client space remains to be seen, though. The biggest hurdle is the expensive cabling because unlike normal SATA and SATA Express cables, the U.2 cable consists of several small, shielded cables that increase the cost. From what I have heard that is the reason why the industry came up with SATA Express in the first place because the OEMs wanted to keep the cabling cost equivalent to existing SATA cables.

I believe M.2 will be the main connector / form factor in the client space, but there is still a market for high performance and capacity 2.5" PCIe SSDs as M.2 has more physical limitations that restrict the capacities and thermals. I can see U.2 in high-end motherboards where the connector and cable costs aren't that big of an issue, but we'll see what happens over the next year or two.