The launch of Braswell, to replace Bay Trail-D, is going to slowly emerge over the next few months. We reported on the initial launch of SKUs as leaked, but it would seem that MSI is taking point by formally announcing three motherboards in the ECO line. We reviewed the B85M-ECO at the end of last year and came away relatively impressed, stating that this is a market that MSI could seize. At the time I did not know what the next product would be, but Braswell is MSI’s answer. 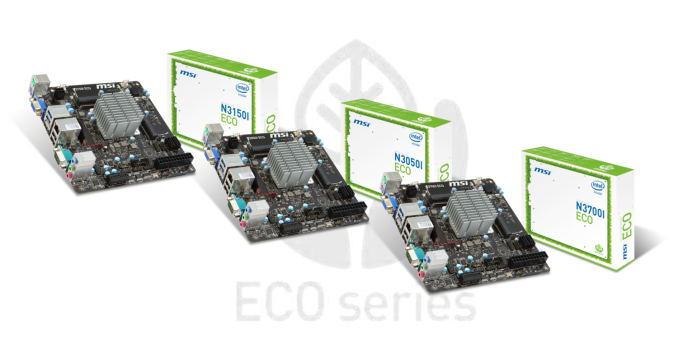 All the boards have two DDR3L-1600 SO-DIMM slots for support up to 8GB of DRAM along with two SATA 6 Gbps ports, a PCIe 2.0 x1 slot, gigabit Ethernet and USB 3.0. The cooler is passive, which for a 6W SoC sounds about right. Judging by the images, we’re looking at a 2.1 audio codec on board (probably the ALC662 normally found in laptops) as well as a COM port and VGA/HDMI ports.

Unfortunately all my MSI contacts seem to be out of office right now, so getting more detailed images for analysis, release dates and pricing is on hold. I will update with more information as we get it.