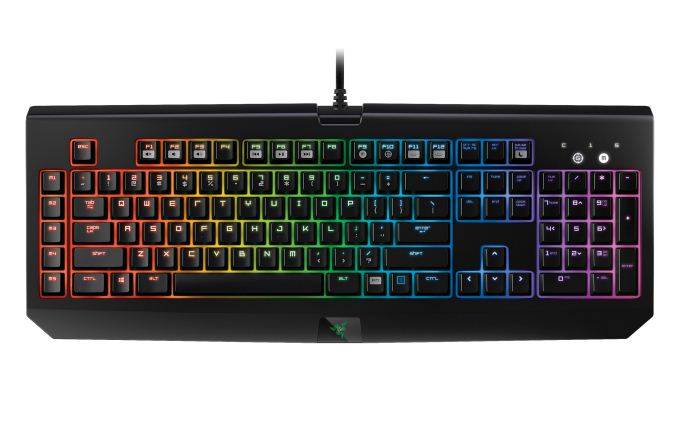 Today in Cologne, Germany at Gamescom 2014, Razer revealed their latest updates for their line of peripherals. Launching with a new feature dubbed Chroma, Razer announced three updated devices for the 2015/2016 timeframe: the BlackWidow Ultimate keyboard, DeathAdder gaming mouse, and Kraken 7.1 headset. Presumably these devices will be similar to the existing line of Razer peripherals, with the key difference being Chroma, which provides customizable multi-colored backlighting.

The BlackWidow Ultimate keyboard is perhaps the most eye-catching of the three, and it appears similar to Corsair's RGB-backlit K70 and K95 keyboards with per-key lighting. The difference is in the details of course, and Razer uses their own custom Green/Orange switches, so the feel will be slightly different from the Corsair models. The DeathAdder and Kraken aren't quite as advanced, in that there are fewer backlights available – the scroll wheel and Razer logo on the DeathAdder are linked to the same color, while the ear cups on the Kraken are likewise linked. One interesting feature however is that all three devices can be synchronized via Razer's cloud-based Synapse software.

Like other RGB backlit devices, Chroma in theory allows up to 16.8 million colors, though as we've noted before overlap among the colors means the "useful" palette is going to be more like 20-40 colors. Besides selecting individual colors, Razer offers several effects for colors as well. Spectrum cycling is for those that want to show the full rainbow of colors, while breathing causes the backlight to pulse one or two colors on and off every seven seconds. The BlackWidow keyboard offers several additional options, including the ability to customize each individual key and save/load templates optimized for various games. Reactive mode causes the individual keys to light up when pressed and then fade out with three time delays for fading to black (slow, medium, and fast), and finally there's a wave effect that cycles the colors on the keyboard in a wave.

Razer has a web demonstration showing what the various effects look like, or you can watch the promo video on YouTube. Razer will also be providing an open Chroma SDK to allow game developers and users full access to the devices, providing the potential for an even deeper level of customization (e.g. reactive mode with multiple colors should be possible). Pricing for the devices has not been announced, but both the Chroma-enabled devices will be available starting in September 2014. The Chroma SDK meanwhile is slated for release in "late 2014".