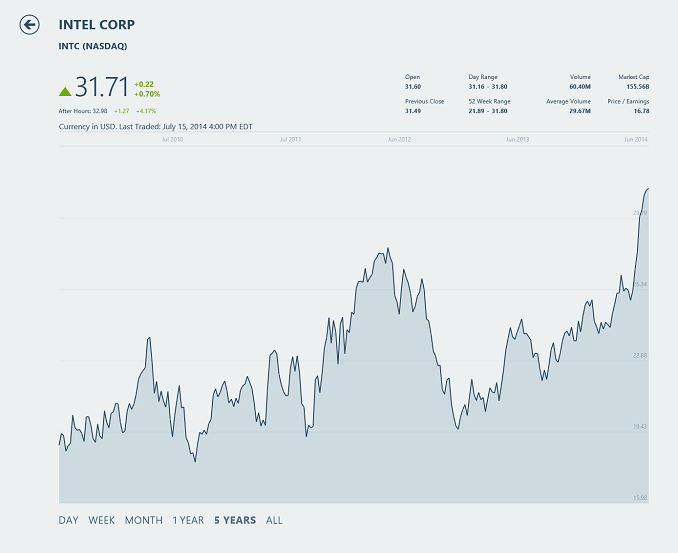 The stagnant PC sector is finally showing some signs of life again after declining over the last several years. Intel’s PC Client Group reported revenue of $8.7 billion, up 9% over last quarter and 6% year-over-year. Unit volumes of PC Client chips were up 12% over last quarter, and 9% from last year. The average selling prices (ASP) were down 3% from Q1 2014 and 4% from Q2 2013. Most of this can be attributed to a 7% drop in ASP for the notebook platform, where as desktop chips actually slightly increased ASP over Q2 2013.

The recently formed “Internet of Things” group continued its strong growth, up again another 12% over last quarter and 24% year-over-year. This group includes embedded segments such as retail, transportation, and consumer focused things like home automation.

The one sector at Intel which continues to struggle is the Mobile and Communications group which was down 61% Q1 2014 versus Q1 2013, and once again in Q2 2014 it was down again 67% compared to Q1 and 83% year-over-year. The silver lining on this is the relatively small amount of revenue this is for Intel with this group only having $51 million in revenue, but in a world where the number of mobile devices is skyrocketing, Intel is struggling to capitalize on the new market. Intel is still not price competitive with the Bay Trail SoC business and are working on a low cost platform for Bay Trail. In the meantime, Intel is subsidizing the platform cost for the time being in order to not be shut out of this market. It’s not something that would be sustainable forever, but it seems to be allowing them a toehold in the mobile market while they continue to push towards lower cost silicon for partners. We’ve seen a lot of mobile devices coming with Bay Trail in the last couple of months, including a $110 Toshiba tablet and this contra revenue is driving that, but hurting the short term results for the Mobile group.

The last sector at Intel to report was the Software and Services, coming in at $548 million in revenue which is pretty much flat quarter-over-quarter and year-over-year. This segment includes McAfee which was purchased by Intel in the not so distant past.

The forecast for next quarter and the rest of the year has been upgraded, with Q3 2014 being forecast for $14.4 billion plus or minus $500 million. The board has also approved an additional $20 billion in share repurchases, with an expectation of $4 billion in shares to be repurchased in Q3. Looking back historically, Intel is once again getting close to record revenue and incomes, having almost fully recovered to 2012 levels. 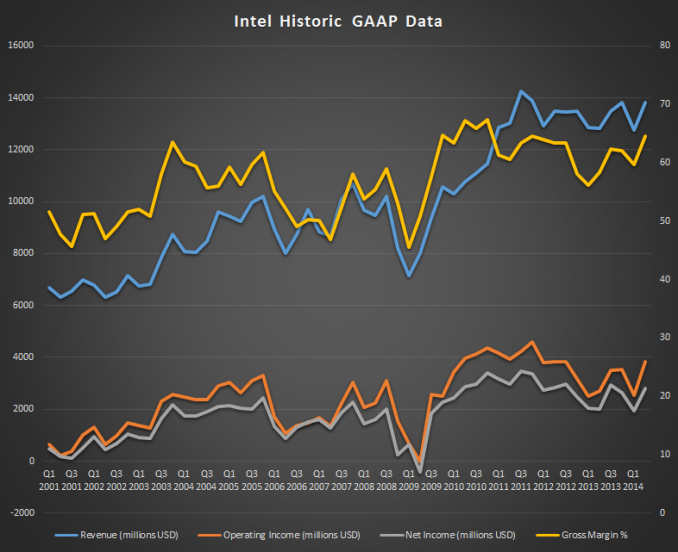 Broadwell is now expected during the holiday season 2014, which is certainly much later than hoped. Going back to 130 nm and coming forward until 32 nm, Intel has averaged 8.2 quarters between process nodes. They have been on 22 nm for nine quarters already, meaning the wait between 22 nm and 14 nm will be about 11 quarters which will be the longest time on a single process node since Intel began the tick tock strategy. Clearly there are some heavy engineering hurdles to overcome as we move towards smaller and smaller processes. We’ll have to watch and see if this delays Skylake or if Broadwell has a shorter than expected lifespan. 10 nm is on the roadmap for 2016 which might be an aggressive timeline with the time 14 nm has taken.

This was a great quarter for Intel, which is generally a bellwether for the rest of the PC industry. After several years of decline, things are looking more optimistic for the industry. Revenues from Intel were great, but historically they have always done well. The exciting takeaway from this earnings report is the increased volumes in both notebook and desktop sales. Whether this is a turnaround in the market, or just a small correction is tough to tell yet.