Performance consistency tells us a lot about the architecture of these SSDs and how they handle internal defragmentation. The reason we don’t have consistent IO latency with SSDs is because inevitably all controllers have to do some amount of defragmentation or garbage collection in order to continue operating at high speeds. When and how an SSD decides to run its defrag or cleanup routines directly impacts the user experience as inconsistent performance results in application slowdowns.

To test IO consistency, we fill a secure erased SSD with sequential data to ensure that all user accessible LBAs have data associated with them. Next we kick off a 4KB random write workload across all LBAs at a queue depth of 32 using incompressible data. The test is run for just over half an hour and we record instantaneous IOPS every second.

We are also testing drives with added over-provisioning by limiting the LBA range. This gives us a look into the drive’s behavior with varying levels of empty space, which is frankly a more realistic approach for client workloads.

Each of the three graphs has its own purpose. The first one is of the whole duration of the test in log scale. The second and third one zoom into the beginning of steady-state operation (t=1400s) but on different scales: the second one uses log scale for easy comparison whereas the third one uses linear scale for better visualization of differences between drives. Click the buttons below each graph to switch the source data.

For more detailed description of the test and why performance consistency matters, read our original Intel SSD DC S3700 article.

As you would expect with such hefty over-provisioning, the IO consistency is excellent. The 480GB model manages around 40K IOPS at steady-state, which is certainly one of the highest we have tested. (For the record, the Intel DC S3700 does about 33K but unfortunately there wasn't room in the table to include it.) The 800GB version doesn't do as well given its smaller over-provisioning percentage but it's relatively competitive with the 200GB P400m, which has 336GiB of NAND onboard (that's 44.6% total over-provisioning versus 27.2% in the 800GB M500DC). Compared with the P400m, the M500DC is, after all, a nice upgrade because it's able to improve IO consistency without using more over-provisioning to do that.

In addition to our regular performance consistency graphs, I decided to include two additional graphs that test the IO consistency over a longer period of time. For client drives, 2000 seconds is generally enough to show steady-state behavior but enterprise SSDs tend to have more over-provisioning and hence require a longer time to reach steady-state. Instead of running the test for 2000 seconds, I extended the run to 7200 seconds (i.e. two hours) while keeping everything else the same. I only have results for the M500DC drives right now, but let's see if anything changes with a longer test cycle: 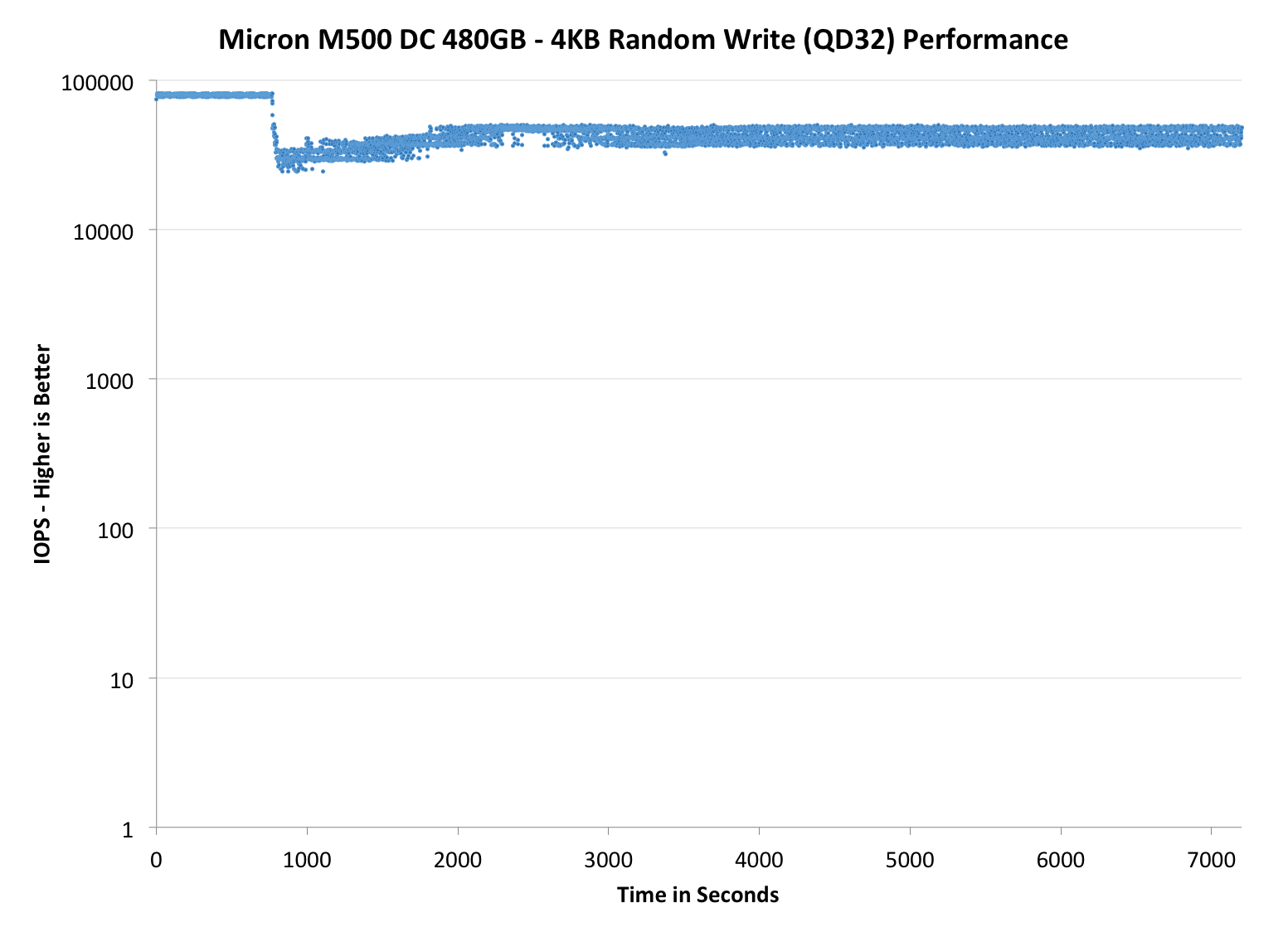 As you can see, neither of the drives show steady behavior right after 2000 seconds. In fact, it looks as though the initial trigger of data reordering drops performance and then the M500DC drives recover somewhat around the 3000 second mark, though the different amount of overprovisioning means they don't look all that similar. Unfortunately I don't have any results for other drives at this point but I'll be sure to test more drives before the next review to give you a better picture ot the M500DC's position in the market. 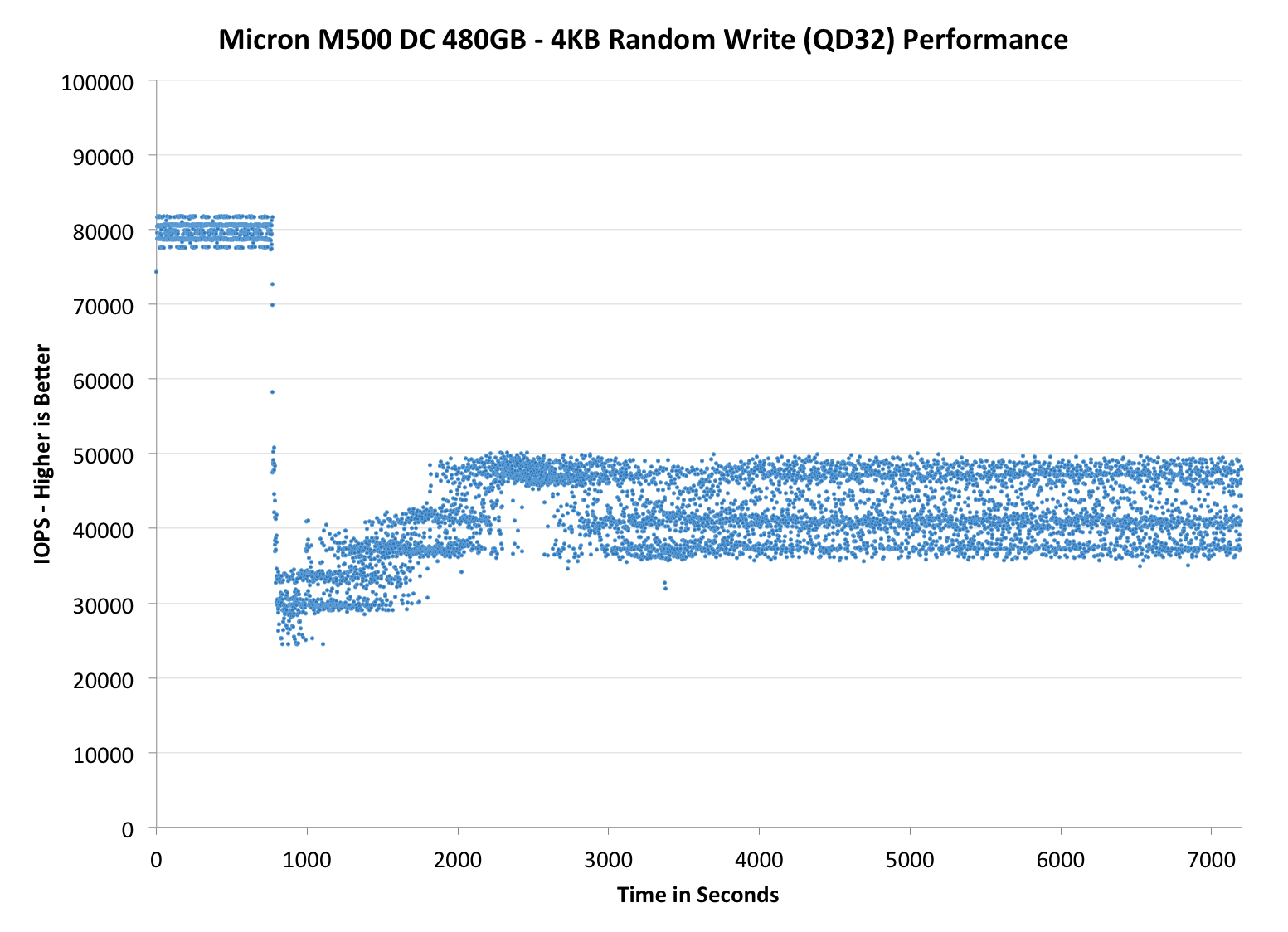