Toshiba and Qualcomm Set to Introduce UFS 2.0 Solutions in 2014 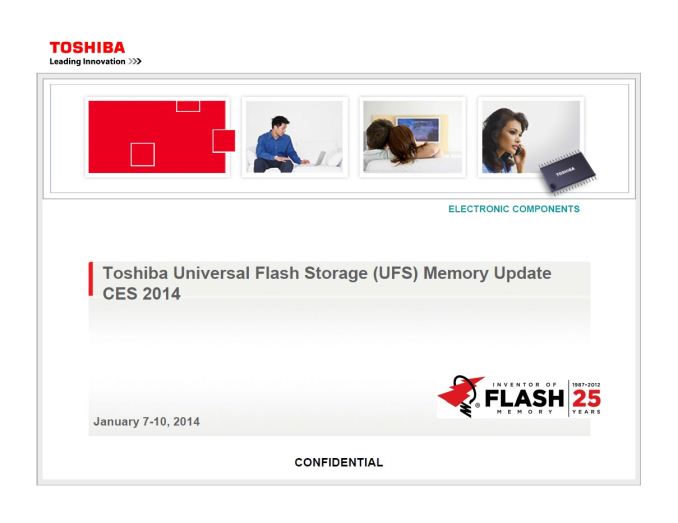 Since they first started showing up on the market, most smartphones and tablets have used eMMC flash storage. While in some ways similar to the NAND flash used in SSDs – and some devices have even gone so far as to call eMMC storage “SSD storage” – the reality is that eMMC has always been much slower than what we’re used to seeing in SSDs. UFS – Universal Flash Storage – is looking to become the successor to eMMC, and we’re very much looking forward to the host of improvements it brings.

Let’s start with a brief recap of eMMC. Initially designed as an open standard for flash memory cards, MMC (MultiMediaCard) has been around since 1997. eMMC basically takes that standard and embeds the controller and flash memory into a small BGA package for use in devices like smartphones and tablets, or anywhere else where having some flash storage might prove useful. Like most flash memory cards, MMC/eMMC has seen improvements to read and write speeds over the years, and more recently we’ve gone from 104MB/s (eMMC V4.41) to 200MB/s (eMMC V4.5) to 400MB/s (eMMC V5.0). However, eMMC is based on an 8-bit parallel interface, and scaling of interface performance is nearing its limits. UFS looks to move to a new standard.

Instead of a parallel interface, UFS uses a serial interface. Toshiba first announced support for UFS 1.1 and enabled chipset support last year, which has allowed vendor and OS support to mature. Now that they’ve had time to work out the initial kinks that new technologies inevitably bring, Toshiba is taking the standard to mass production with UFS 2.0 controllers and flash, targeting 2Q’14 for the release.

Already there are two options, HS-G2 and HS-G3, with two lanes providing an aggregate 5.8Gbps (~725MB/s) of bandwidth for HS-G2, and HS-G3 doubles that to 11.6Gbps (~1.45GB/s). Effectively that means nearly double and quadruple the interface performance compared to eMMC V5.0. Besides increasing the interface speed, UFS also brings full duplex operation (read and write simultaneously) and command queuing, which will both improve performance.

UFS is a JEDEC defined standard, and as we move into 2014 we should start seeing devices adopt the standard in place of eMMC. Short-term, UFS isn’t necessarily superior in every area compared to eMMC – Toshiba notes that eMMC is likely to be more power efficient and cheaper right now, though the gap should narrow over time. Long-term, however, devices continue to need additional performance and eMMC may not get us there (4K video is one example cited).

In their press release, Toshiba specifically mentions working to enable UFS 2.0 on Qualcomm Snapdragon 805 SoC devices. Qualcomm notes that UFS will enter at the high-end of the smartphone and tablet markets, with eMMC continuing to fill the needs of the midrange and entry-level devices for the time being, but eventually we should see UFS trickle down to all markets. Now let’s just see about improving some of the random read/write struggles we encounter on smartphones and tablets….