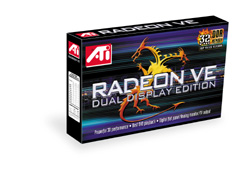 The next product to make its way into this ever expanding market was 3dfx's Voodoo4 4500 video card. Lacking severely in the performance department, the Voodoo4 4500 fell to the bottom of our performance graphs in nearly every test. The card also featured a relatively high price of $150 upon its release.. We concluded that if the Voodoo4 4500 had been launched much earlier, or at a lower price, it may have been met with success, but there was no way that it was going to reach that same level of success given the current competition.

Although time has provided a significant price drop for the Radeon SDR card, ATI felt there was still one feature left to attack. In many cases the Radeon SDR is priced at the same level as quite a variety of GeForce2 MX based cards, at $99 after a mail in rebate, however ATI had yet to add dual monitor support to any Radeon based product. That all changes today with the release of the $99 Radeon VE, a card that ATI is targeting at the workstation by day, game computer by night market.