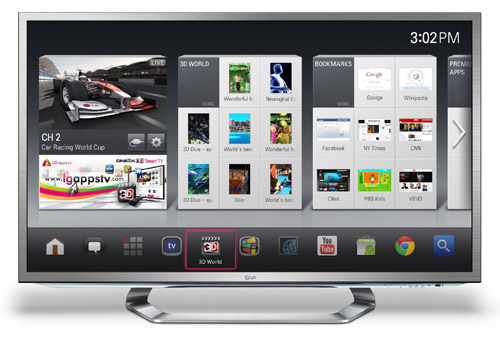 The new interface retains the three column format we saw in the earlier designs, though there’s a higher density of shown content. The content panel is smaller, making room for advertising space in the area below it. The middle column remains reserved for featured content, though the content will be targeted based on your device, so on this 3D set, the features were 3D tech demos. The third panel is now labeled Bookmarks, and to this section the user can pin nearly anything, from stored content and apps, to websites and stations. New panels populate additional screens with the left most screen always serving as the primary home screen. Those panels could include a Recent Apps panel, Settings, and perhaps widgets featuring live updated content. The arrangement seems very familiar to any Android user that’s spent time organizing their home screens.

All this is simple enough, and the density is good, not too overwhelming and not cluttered or busy looking. The dock across the bottom compliments the whole experience well, with a size premium provided to icons within the dock. And along the right side of the dock you find the core Google TV apps: Chrome, YouTube, Search and Market. We were lucky enough to have one of the product managers handle our demonstration and his passion for the product was clear. He gestured excitedly at the new icons and how well they coexisted with the icons and UI from LG.


The AllRecipes.com App on LG's Smart TV with Google TV

Surely, I thought, once he clicks on one of those apps, I’ll be greeted by a splash screen and a long delay, as Google TV launches, and then within that instance the Chrome app is opened, or the Market loads. And then it happened, a simple rectangular box, with light grey text, and a font I recognized from the tablet in my bag. The product manager, apologized and reminded me that this was very early software, shipped only days before from their labs in Korea, while scrambling to clear the notification informing us that a background service had stopped responding. That’s when I realized that I wasn’t looking at two OSes set side by side. LG’s Smart TV UI was now an Android 3.2 skin. Google had let them skin Google TV.

The number of Google TV 1.0 products can be counted on one hand, and you’d hardly use all five fingers. Logitech’s Revue was the most successful, and it was a financial disaster for Logitech. Sony produced a television and a Blu-ray Player with the technology built-in. At CES Google introduced several partners in the space including new internal hardware from Marvell and MediaTek, and new product partners in Vizio and LG. The number of products that make it to market will remain relatively small, and will face competition from the myriad OTT solutions that have grown both in number and sales. They’ll also face competition from the likes of Lenovo, who is aggressively repurposing Android 4.0 for their first venture into the TV market, the Lenovo K91. Like all the other K pre-fix denotes a Chinese market product, and few if any of these products make it to US shores. Lenovo’s success in the Chinese TV market could drive efforts to expand globally, though; and beyond that there’s the ever present issue of Google certification. 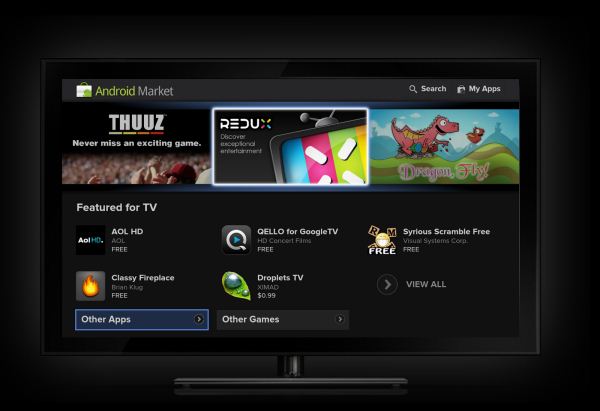 Google’s Android Market is the value add that they use to leverage control over device manufacturers. As was reported in some legal documents that came to light last year, Google may have acted to block Samsung from releasing certain products because of GPS software implementations. There’s speculation about Google playing favorite’s with some manufacturer’s and stifling down market competition. And all this is muddled when you see that some devices that blatantly break with the speculative standards Google sets for products are granted access to the Market. Recently, in a blogpost on their development portal, Google laid out a new requirement for Market access. Going forward from Android 4.0, device manufacturer’s would be required to build their skins within the Theme framework Google provides, and that at all times, access to the default Holo theme would be retained. While this would still allow for OEM and carrier defined widgets and software preloads, the user would have access to the default core UI. This is something we have been asking for since the Droid Incredible review introduced us to HTC’s Sense UI on Android.

But with Google’s history of having a seemingly arbitrary approval process, it’s difficult to say for sure whether this is more of a soft standard. In business, the rules are simply the starting point for negotiations. Lenovo’s Android 4.0 based solution is purported to have Market access. In a chance encounter with a Lenovo product manager, I was left with the impression that Google had set alternate standards for devices marketed outside of the US. This seems plausible but opens up worries of fragmentations in software. Imagine if an OEM developed a software solution bundled within their skin that had earnest appeal to the end user, an advanced browser for instance. That manufacturer could use this bundling to negotiate access to the Android Market in the US without exposing the Holo theme.

LG wanted to be a Google TV partner. They wanted to have access to the Marketplace, but they wanted to be able to apply their own UI themes. And they were able to negotiate that for Google TV 2.0. What could this mean for later Google TV iterations? We don’t know. As a technology partner, success amongst manufacturer’s is about differentiation. Success amongst consumers is about a consistent user experience. If a mainstream consumer has to relearn how to change channels or access a favorite app, every time they encounter a different television, they will grow frustrated and that will hurt smart TV adoption.

Throughout the rest of the demo there were hiccups, UI stuttering and additional Force Close notifications. Content playback was smooth and the few apps that loaded showed promise. YouTube as a feature on smart TV and OTT solutions carriers a lot of weight, but poses an interesting complication. The vast majority of YouTube content is below standard definition in quality. When stretched across screens larger than a laptop the deficits are ever more pronounced. As HD cameras become more and more ubiquitous (thanks in large part to smartphone adoption), user generated content will improve, but even some professional content can look unpleasant due to compression artifact and poor production quality. Google’s solution seems to be elevating YouTube from a portal for almost entirely user generated content and bringing media partners to provide content. And tying access to this media content through the Android Market could be the leverage Google needs.

Android skins have been an issue, but generally well accepted by the public. Where confusion strikes is when a user buys an Android device from a competitor, and the e-mail widget is different or the keyboard less friendly. Would the same hold true for a TV? If the core experience (seeking, selecting and viewing content) remained consistent, would users mind a tweaked UI? Google has a long way in proving themselves capable of altering the way we watch televison for the better. Partnering with a manufacturer to make that software experience better may be a good step.