Despite the fact that the 45 nm Quad-core Opteron was the best server CPU at launch, a few months later AMD’s success was washed away by a tsunami called “Nehalem”. The Nehalem architecture combined subtle tweaks to an already superior integer engine with brute force tactics such as a triple channel integrated memory controller. The IMC delivered low latency and massive amounts of bandwidth thanks to the highest clocked DDR-3 DIMMs. But it was not enough for the ambitious Intel engineers. They added Simultaneous MultiThreading (SMT), and this was the final blow to any competition left standing in the server market. SMT or Hyperthreading as Intel calls it, boosted performance by 30% and more in key applications such as SAP, Oracle and MS SQL Server. The end result is that the current Xeon outperforms AMD’s best CPU’s by 60 to 85%! Historic, as Intel never had such a commanding lead since AMD entered the market with it’s Athlon MP.

One could start debating about some of the details of these benchmarks, but that would mostly be splitting hairs. Yes, these scores were obtained with DDR3-1333, while the vast majority of X55xx servers are equipped with DDR3-1066. And yes, power consumption of the fastest Xeons is about 20W higher per CPU than on the “Shanghai” Opterons. So in order to compare in the same power range, you should compare with the E5540 at 2.53 GHz. But even with DDR3-1066 and at 2.53 GHz, the latest Xeon would - roughly estimated – outperform the best quad-cores of AMD with 40 to 70%. The lead is even higher in bandwidth intensive applications. Only in the pretty rare dense matrix applications, with Linpack being the most popular benchmark, AMD could still make a point. AMD can deliver the same amount of Gigaflops at lower power consumption and a lower price. Nice, but we are talking about the 1% of the applications on the market. The other ray of hope for AMD was the competitive performance that the Opteron 2389 2.9 GHz delivered on ESX 3.5 on our virtualized benchmark vApus Mark I. But with ESX 4.0, the new Xeon “Nehalem” should widen the gap again thanks to better hyperthreading support and the fact that EPT is fully supported in the latest ESX hypervisor. AMD’s next generation CPU is scheduled to appear in 2012, so it looks like AMD will have to leave the high-end and midrange server CPU market to Intel. Unless…

Ever since the introduction of the 45 nm CPUs, AMD has been executing very well. So well, even, that it reminds us of the K75 times. You might remember how in October 1999, AMD introduced the “K75” in 250 nm and sped up the “x86-Alpha” to 1 GHz in March 2000, only 5 months later. It has indeed been 10 years since AMD has executed so well. Only six months after the successful launch of their 45 nm quad-core, AMD rolls out their hex-core “Istanbul” at 2.6 GHz well ahead of schedule. It is basically a “Shanghai” Opteron with 2 extra cores and a slightly tweaked memory controller. What is more impressive, though, is that AMD is capable of launching a hex-core at 2.6 GHz today, a CPU that consumes only a few watt more than the six month older quad-core at 2.7 GHz. Well done, AMD. But should the IT professional care about the new six-core of AMD? In which applications does it make sense to consider an “Istanbul” based server? Are two extra cores enough to bring back AMD’s Opteron on the specsheet of your next high performance server?

The question is not theoretical. When Intel launched their hex-core “Dunnington”, quite a few applications did not make good use of it. The quad-socket “Istanbul”-based servers will face the same problems as “Dunnington”: some server applications prefer “2n cores”, a few will not scale above eight cores and many will not get past 16 very successfully. Yes, even in the server world, quite many applications do not scale well beyond 8-16 cores. Mailservers, webservers and even some databases may be in that situation. If your database gets a lot of locks on the same amount of data, locking contention will kill off your performance once you get beyond a certain number of cores. Rendering applications are another group that start to show diminishing returns with more than 8 cores. It is pretty likely that clustering dual-socket quad-cores makes more sense that adding more cores to the same machine. 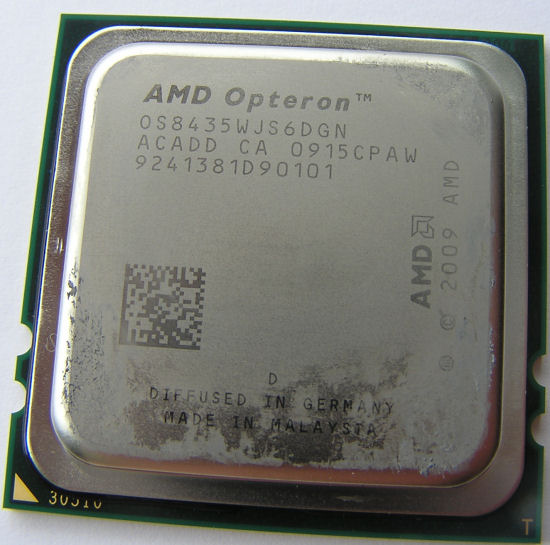 But the six-core “Istanbul” CPU has advantages too. The Nehalem Xeon offers 8 logical cores, but the two threads on each core have to share the 32 KB L1 and the tiny 256 KB L2. Istanbul can work with “only” 6 threads, but each thread gets a 64 KB L1 and an in comparison copious amount of 512 KB of L2. In a nutshell, It is clear that the new AMD “Istanbul” Opteron targets a specific market: a few compute intensive HPC applications, large databases and most importantly: “heavy” virtualized workload. The reason why we say “heavy” is that the six-core is a drop-in replacement for the current quad-core Opterons. That means that the memory capacity of the servers based on the new six-core will probably be the same. If you are consolidating lots of light loads together, you are likely to run into memory limits before you run into processing power limits.