by Johan De Gelas on September 20, 2007 6:00 PM EST
12 Comments | Add A Comment
12 Comments
The past several years, reducing power consumption in datacenters has been one of the most talked about issues, and some progress has been made. PSUs have become a lot more efficient in the AC/DC conversion, with the conversion efficiency rate going up from 70% to as high as 90%. CPUs are dissipating less heat even at full load and have become quite efficient when running idle thanks to technologies like Intel's EIST and DBS. Memory DIMMs (some of them at least) are able to save a bit power too. But there is still a lot more power that can be saved.

Intel's first idea is to turn off a lot of motherboard components if they are not in use. As you can see, in the current platform, a lot of components are always on, no matter how busy they are. On the picture below you can see which components Intel is trying to turn off - or at least make sure that they run in a lower power state. 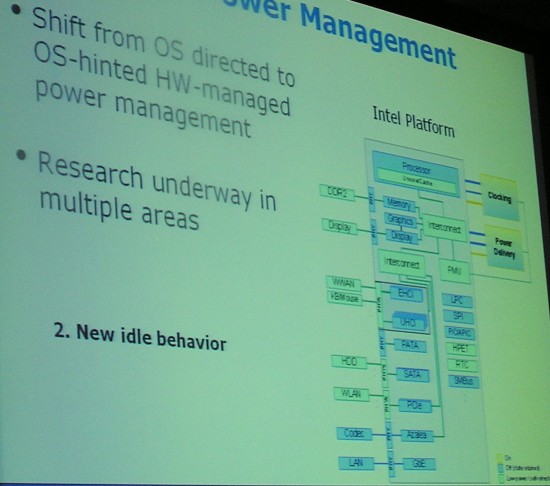 To do this, Intel wants to shift away from OS power management to HW management. It is a bit similar to how AMD's Barcelona and Intel's newest Core CPU regulate their power states. The reason why OS management is not desirable is that it is not accurate enough. Each transition from a low power state to a higher power state or vice versa costs a bit of power, so you want to make sure you are not switching between them too quickly.

Intel is also taking a hard look reducing the VRM and capacitors which are needed for the DC/DC conversions from your power supply to your motherboard. These improvements are desirable for both servers and notebooks. Intel expects up to 30% improvements in performance/watt from these modifications. However, it is clear that even these improvements alone are not going to save the datacenters which are short on power right now. The complete chain from the power entering the datacenter to the CPUs/systems using that power must become more efficient.

Some of the current datacenters are already powered by 48V DC which saves quite a bit of power by reducing heat loads from AC to DC power conversions. Rackable Systems has been promoting DC powered servers for quite some time now. However, 48V DC power also requires much thicker (7 to 17 times bigger) and harder to place cables.

That is why Intel feels that the industry should take a good, long look at a 400V DC power infrastructure. At this point in time, 400V DC power infrastructures would be incredibly expensive, and there are no industry standards. But as you can see at the picture above, about 75% of the power that enters the datacenter would actually be used for performing useful things on your server, instead of only 50% now.

There's a lot more to this subject, but for now we'll just leave it at: To be continued...