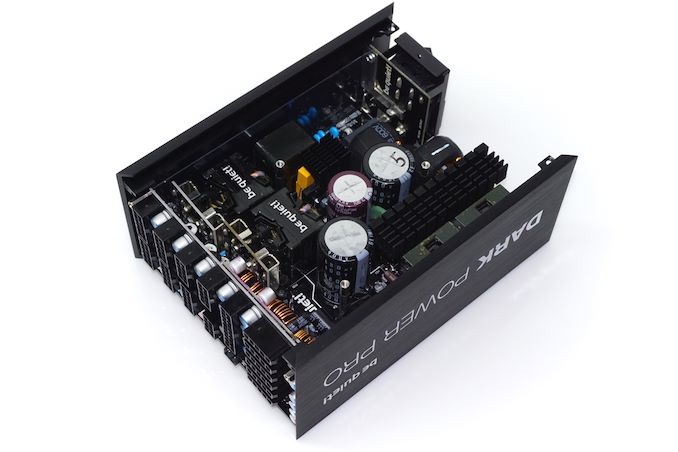 Be Quiet! is a German manufacturer that mainly produces PC cases, power supply units (PSUs), and cooling-related products. As the company's name suggests, their products are designed with quiet operation primarily in mind. The company is no stranger to the North American markets, slowly but steadily increasing its presence over the last few years. Their commitment to continue to increase their presence in the United States became apparent with the recent founding of a US-based service center in California for seamless after-sales support.

Be Quiet!’s main market focus currently lies with PC PSUs, with the company offering more than three dozen different designs split under eight different series. Although most of their products are targeted toward mainstream users, and are consequently designed to be balanced between cost-effectiveness and performance, the company is broadening its product ranges every few months, offering some impressive high-end designs to round out their product lineups.

In today’s review, we are taking a look at the pinnacle of Be Quiet!’s PSU design efforts, the Dark Power Pro 12 1500W (BN647). The Dark Power Pro has a long list of features, the highlights of which are the 80Plus Titanium efficiency rating, the patented Silent Wings cooling fan, and the monstrous 1500 Watts continuous (and 1600 Watts peak) output, which are balanced by a colossal $450 price tag. Be Quiet! clearly is aiming to take on the halo products of the few renowned manufacturers that released >1.5 kW products in the past couple of years, setting a very high bar for our expectations.

Be Quiet! supplies the Dark Power Pro 12 1500W PSU in a large, sturdy, and externally aesthetically minimalistic cardboard box. Despite its simplistic appearance, the packaging is very sturdy and of high quality. Practically nothing is printed at the front of the box but plenty of details can be found on the sides and rear. 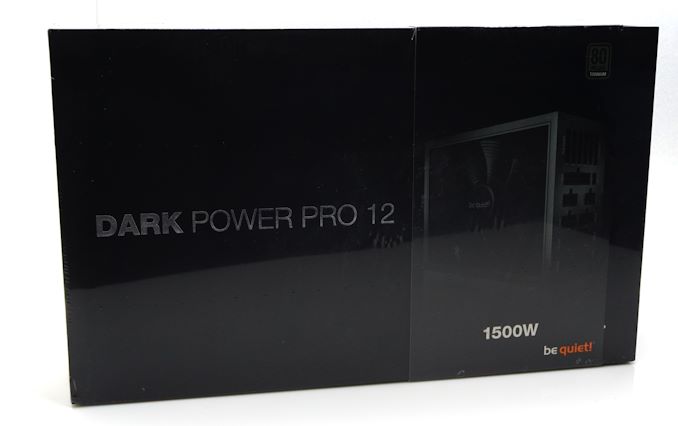 A rich bundle can be found inside the box, as expected from a halo product such as this. Inside the box we found the standard AC power cable, four typical mounting screws and four thumbscrews for the user to select whichever they prefer, ten cable straps, a few cable ties, wire combs, and a PCI slot switch. The PCI slot switch can be used to turn the “overclocking” mode on and off. When off, the PSU has multiple virtual 12V rails, monitoring them for overcurrent individually. When overclocking mode is on, it monitors the entire 12V line as a single rail, preventing the PSU from shutting down when a single connector draws a little bit too much power. The catch is that the latter mode cannot discern single-wire critical faults and such a fault could lead to a massive current over a single wire, irreversibly damaging it.

The Dark Power Pro 12 is a fully modular design, allowing for the removal of every DC power cable, including the 24-pin ATX connector. All of the cables are black, with black connectors and individually sleeved wires. We also found not one but two floppy disk power adapters inside the packaging, an amusing but very odd thing for such a product in 2021. 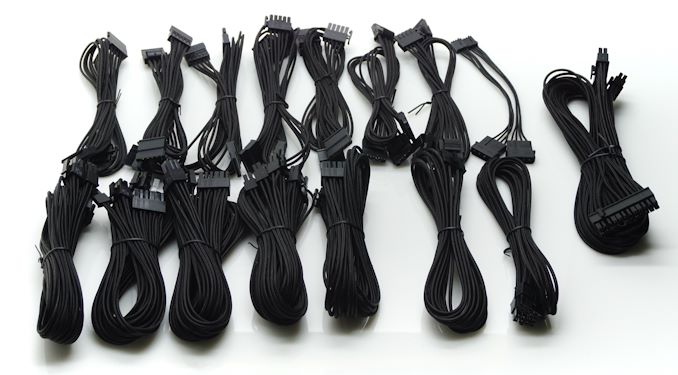 The Be Quiet! Dark Power Pro 12 is visually imposing, featuring a unique layered chassis. The exterior is almost entirely black, with very smooth brushed surfaces and sharp edges. The chassis is very long, measuring 200 mm deep, which makes it incompatible with a large number of smaller cases, but this shouldn't be an issue for the kind of large computers where you'll need (and be able to cool) 1kW to begin with. 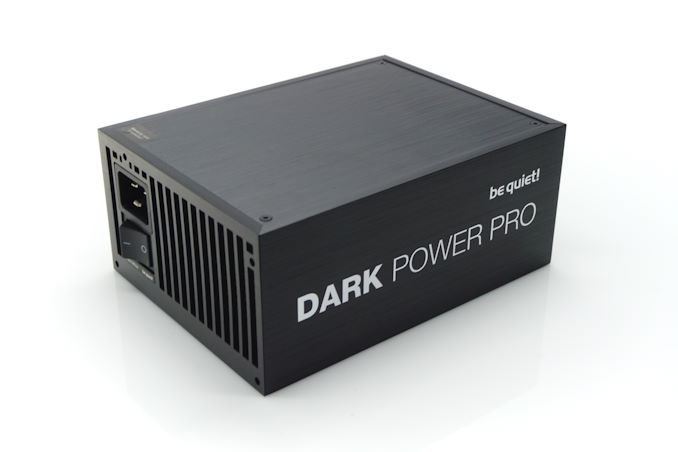 Chrome fonts form the series and company logos on one side of the unit. The other side is covered by a sticker with the unit's electrical specifications and certifications. The top side of the chassis is almost perfectly clean, with the small exception of the warranty sticker. A massive on/off switch can be seen at the rear side of the unit, right below the IEC C19 connector, which was required considering the high current draw when the PSU needs to be powered from a 115V AC source. 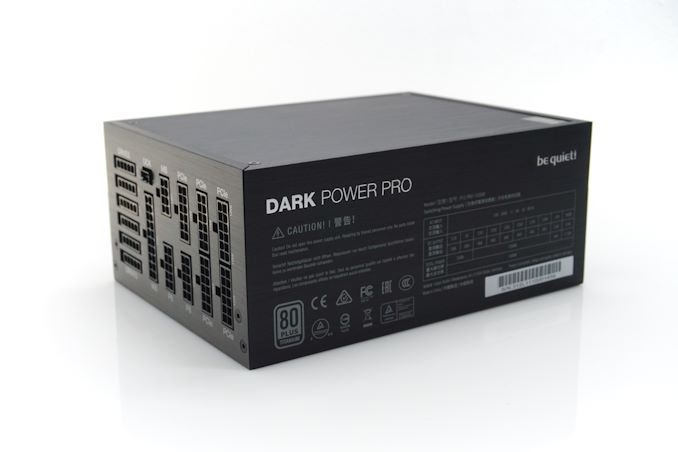 The front side of the Dark Power Pro 12 is filled to the brim with the connectors for the modular cables. Be Quiet! is using a straight 5-pin connector for the SATA/Molex cables, dual row 10-pin cables for the CPU cables, and dual row 12-pin connectors for the PCIe cables. The ATX cable connects to two connectors at the PSU's side, a large 20-pin connector, and a second 8-pin connector. The printed legend indicates which virtual 12 V rail corresponds to every connector. Even though each group consists of physically identical connectors, users should be careful not to connect the cables randomly but as recommended in the manual, because the default mode of the Dark Power Pro 12 is with multiple 12V OCP rails, meaning that the PSU will shut down if the load is improperly balanced. 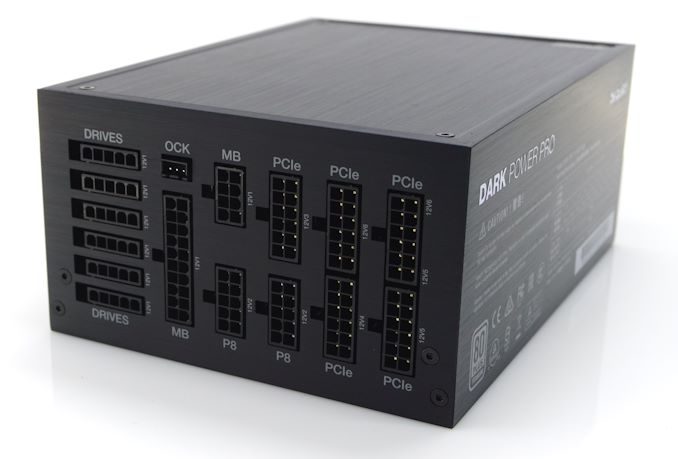 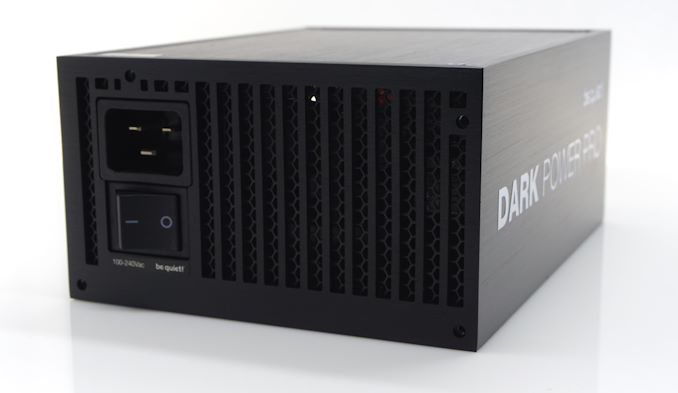 We usually find Be Quiet! using their own fans to cool their PSUs, and the Dark Power Pro 12 is no exception, using a Silent Wings 135 mm fan under the finger guard. The only difference here is that the Dark Power Pro 12 is using a frameless version of the fan. This design supposedly reduces the intensity of the vibrations and increases airflow, but there is a downside to it – if the fan ever fails, finding a replacement will be a challenge for anyone but the manufacturer. The maximum speed of the 135 mm fluid-dynamic bearing (FDB) fan is 2600 RPM, an extremely high speed for a fan of this size. 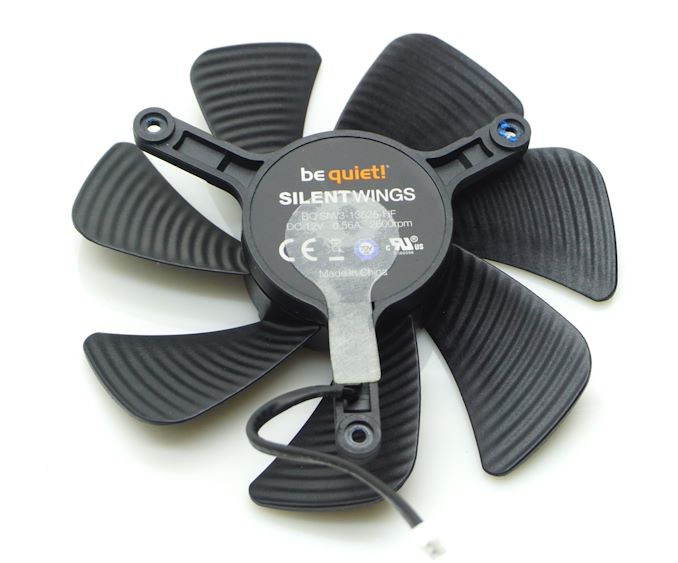 Be Quiet! employs several OEMs for the design and production of their PSUs. The OEM behind the creation of the Dark Power Pro 12 is Channel-Well Technologies, or CWT. Many experienced enthusiasts might have guessed that sooner by the presence of the multiple virtual 12V lines, a design tactic frequently employed on their platforms. 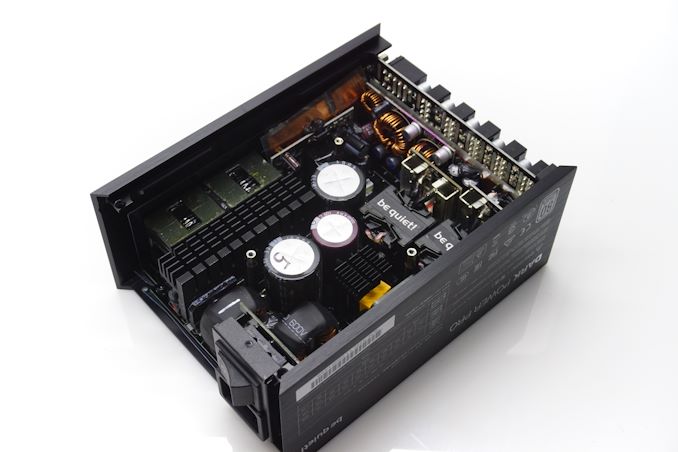 The platform that the Dark Power Pro 12 can be a very interesting discussion and research topic. It is not a fully digital platform, but rather it's a hybrid. Specifically, it uses digital controllers on the critical parts and analog controllers on the secondary rails that derive from DC-to-DC converters. 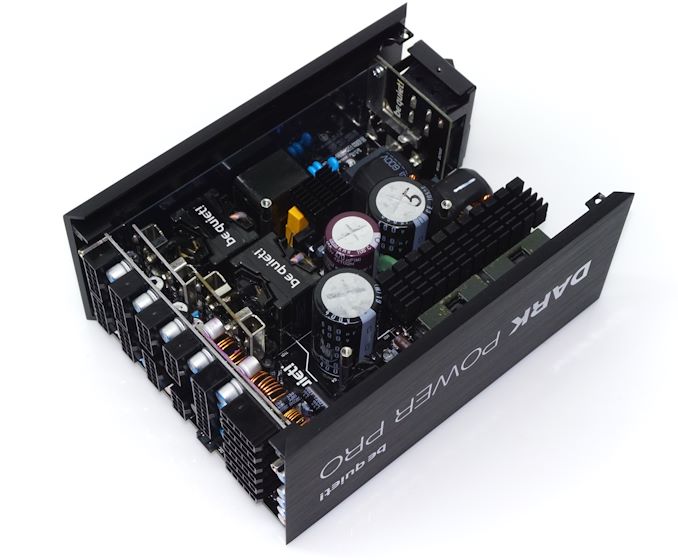 Diving deeper, there was nothing special regarding the filtering stage, which comprises a total of six Y capacitors, two X capacitors, and two filtering inductors leading to a dual input rectifying bridge configuration. The bridges do not have their own heatsink but are attached to a large heatsink that holds most of the active primary side components. There are not one, not two, but three APFC capacitors to cope with the massive power requirements of the unit. Two capacitors are made by Nichicon and one is supplied by Nippon Chemi-Con. 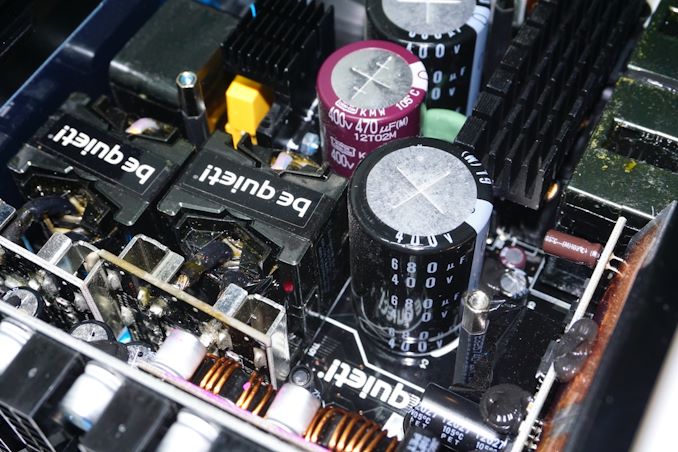 Four transistors form a full-bridge inversion topology at the primary side of the unit. There are two transformers but a single output, most likely because there was no room for a single transformer that was powerful enough – or a single transformer powerful enough that could fit in this design was too expensive. The twelve MOSFETs that generate the 12V rail on the secondary side are all attached on vertical daughterboards with their own heatsinks. 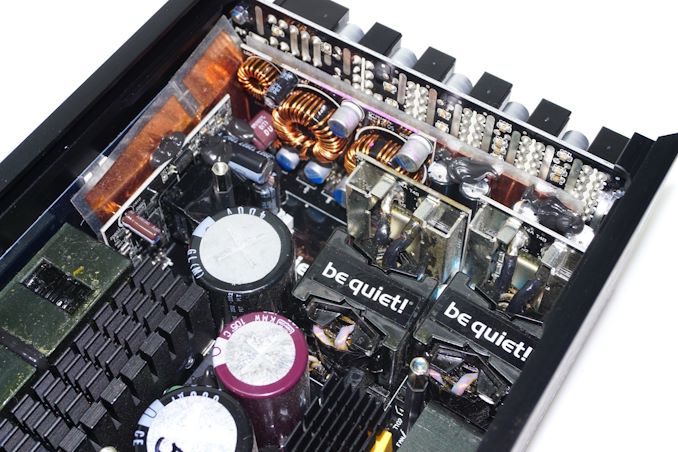 The 3.3V and 5V lines are being generated via the DC-to-DC conversion circuits found on the vertical PCB near the front of the unit. All of the secondary lines, including the 5VSB line, are governed by an analog controller. There are numerous electrolytic and polymer capacitors to be seen in the Dark Power Pro 12. Nichicon, Rubycon, and Nippon Chemi-Con supply the electrolytic capacitors, while FPCAP and United Chemi-Con supply all of the polymer capacitors. And although five different capacitor suppliers are involved in the creation of this specific PSU, all of them are renowned for their high-quality products. 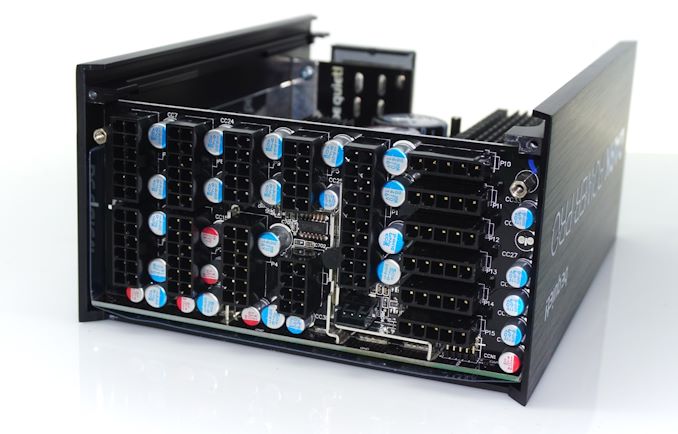