Intel has been responsible for almost all of the commercial volume of 3D XPoint-based products, under their Optane brand for both NVMe SSDs and persistent memory modules in the DIMM form factor. Micron in 2016 announced their QuantX brand for 3D XPoint products, but never shipped anything under that brand. Their first and only real product based on 3D XPoint was the X100 high-end enterprise SSD which saw very limited release to close partners. Micron has now decided that further work to commercialize 3D XPoint memory isn't worth the investment. 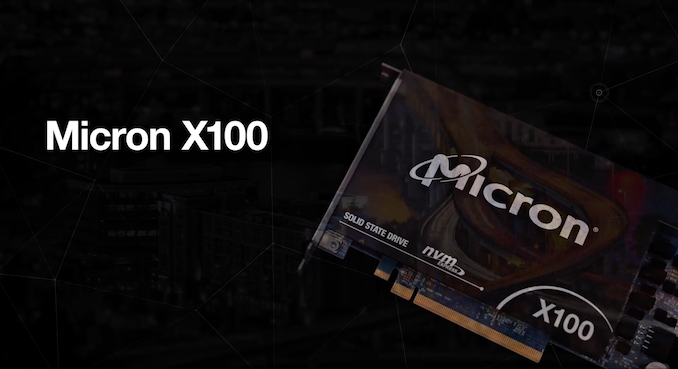 Micron currently owns the only fab equipped to mass-produce 3D XPoint memory: the Lehi, Utah fab that was formerly the home of the Intel-Micron flash and 3D XPoint joint venture IMFT. Intel and Micron began splitting up their partnership in 2018, first parting ways for 3D NAND flash memory development, followed by dissolving the 3D XPoint partnership after completing development on the second generation 3D XPoint. In 2019, Micron exercised their rights to buy out Intel's share of the IMFT fab, leaving Micron as the sole owner of the fab and Intel in the position of buying 3D XPoint wafers from Micron to use in Optane products. Intel's Optane products have not been enough to fully utilize the capacity of that fab, and Micron's non-GAAP operating profits have been taking a hit of over $400 million per year in underutilization charges.

Micron is now putting that 3D XPoint fab up for sale, and is currently engaged in discussions with several potential buyers. Intel is the most obvious potential buyer, having recently begun the long process of selling their NAND flash and flash-based SSD business to SK hynix while keeping their Optane products. Intel has already moved their 3D XPoint R&D to Rio Rancho, NM but has not built up any 3D XPoint mass production capacity of their own; buying the Lehi, UT fab would save them the trouble of equipping eg. their NAND fab in Dalian, China to also manufacture 3D XPoint.

However, Intel is not guaranteed to be the buyer of the Lehi, UT fab. They've doubtless had opportunities to do so before as Intel and Micron unwound their partnership. Micron states that the Lehi, UT fab could be used to produce analog or logic ICs, not just memory—and that converting it to large-scale manufacturing of DRAM or NAND flash memory would not be as appealing to Micron as simply expanding capacity at their other existing fabs. With widespread semiconductor shortages affecting almost all corners of the industry, this fab is likely to sell quickly even if the buyer needs to put substantial effort into retooling.

Micron does not have a direct replacement lined up for 3D XPoint memory technology, but continues R&D into new memory and storage technologies. Micron's announcement is emphasizing a pivot toward developing memory products that will use the Compute Express Link (CXL) interface, which promises to be a vendor-neutral interface for DRAM and non-volatile memories such as 3D XPoint.