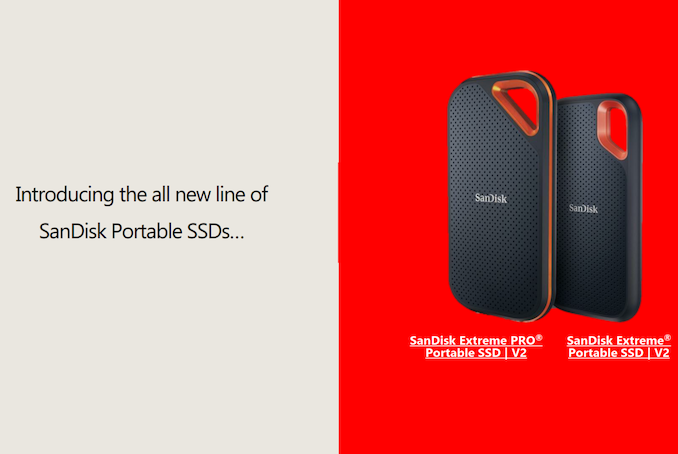 The SanDisk Extreme PRO Portable SSD released in 2019 has been one of the top performers in the external flash storage market segment. Putting a high-end WD Black SN750-class M.2 PCIe 3.0 x4 NVMe SSD behind an ASMedia ASM2362 bridge helped it deliver speeds of up to 1050 MBps when used with USB 3.2 Gen 2 ports. One of the key differentiators was its performance consistency under heavy sequential writes, with no SLC caching effects (write speed cliff) or thermal throttling. Coupled with its handy industrial design (in particular, the carabiner loop integrated into an easy-to-carry casing), it has been on top of our list of recommended USB 3.2 Gen 2 external SSDs since the beginning of this year. Along with the 2019 PRO, SanDisk also offered the lower-priced 2018 SanDisk Extreme - a SATA SSD behind a USB 3.2 Gen 1 bridge. Despite thermal throttling under stress, the performance and price made the 2018 Extreme Portable SSD an attractive option for casual users.

A detailed review of the 1TB model of the SanDisk Extreme Portable SSD v2 (along with the recently introduced WD My Passport SSD (2020) 1TB version) is available here. A DRAM-less SN550-class NVMe SSD is used behind an ASMedia bridge, allowing for lower power consumption and a relaxed thermal design compared to the 2019 Extreme PRO Portable SSD (which also claimed read/write speeds of up to 1050 MBps).

The Extreme PRO Portable SSD v2 uses the WD Black SN730E SSD, which is essentially the OEM version of the SN750, but upgraded to 96L BiCS 4 3D NAND flash, and has firmware tweaked for use with external drives. The PCIe 3.0 x4 NVMe interface allows the Extreme PRO Portable SSD v2 to support read/write speeds of up to 2000 MBps. The forged aluminum heat sink used in the 2019 SanDisk Extreme PRO is carried over to prevent thermal throttling. The SSD also has a 2m drop protection. New to the v2 SSDs is official compatibility with a range of USB Type-C smartphones.

The USB 3.2 Gen 2x2 port in the PRO v2 is enabled by the ASMedia ASM2364 bridge chip. The SanDisk Extreme PRO Portable SSD v2 is not the first USB 3.2 Gen 2x2 drive from the Western Digital stable. Late last year, WD had started selling the WD_BLACK P50 with similar advertised speeds. Targeting the gaming market, the WD_BLACK P50 had a unique industrial design and utilized a SN750E internal SSD (64L BiCS 3 3D NAND flash) - a version of the SN750 with tweaked firmware.

Despite the appearance of USB 3.2 Gen 2x2 ports in certain high-end motherboards, and the announcement of several USB 3.2 Gen 2x2 PCIe cards, the uptake of this high-speed interface in the computing world has been limited. Announced cards (such as the GIGABYTE GC-USB 3.2 GEN2X2) are yet to become available in the retail market. In fact, only the WD_BLACK P50 and the Seagate Firecuda Gaming SSD appear to be USB 3.2 Gen 2x2 client devices from well-known manufacturers available for purchase today. They are now joined by the SanDisk Extreme PRO Portable SSD v2. Western Digital indicated that they expect increased adoption of USB 3.2 Gen 2x2 next year on the host side. Given that the Tiger Lake platform doesn't support USB 3.2 Gen 2x2, it is going to be interesting to watch how this plays out in the near future. We will have some additional comments on the state of this market segment and hands-on reviews of some USB 3.2 Gen 2x2 gear in the coming days.

Both of the drives being introduced today have an operating temperature range of 0 to 45C, and come with an IP55 ingress protection rating. The drives are also getting hardware encryption support, which brings them on par with the WD My Passport SSD as far as security is concerned. Western Digital also indicated that their confidence in BiCS 4 flash is allowing them to upgrade the warranty on the SanDisk Extreme model from the usual 3 years to 5 years. On the pricing front, the USB 3.2 Gen 2x2 Extreme PRO Portable SSD v2 is priced at $300 and $500 for the 1TB and 2TB versions. The Extreme Portable SSD v2 has a suggested retail price of $120, $200, and $355 for the 500GB, 1TB, and 2TB versions respectively.