The recent renaissance of AMD as the performance choice in the high-end x86 market has been great for consumers, enabling a second offering at the top-end of the market. Where Intel offers 28 cores, AMD offers 24 and 32 core parts for the high-end desktop, and to rub salt into the wound, there is now a 64 core offering. This CPU isn’t cheap: the Ryzen Threadripper 3990X costs $3990 at retail, more than any other high-end desktop processor in history, but with it AMD aims to provide the best single socket consumer processor money can buy. We put it through its paces, and while it does obliterate the competition, there are a few issues with having this many cores in a single system.

I Want Performance, What Are My Options

The new AMD Ryzen Threadripper 3990X is a 64 core, 128 thread processor designed for the high-end desktop market. The CPU is a variant of AMD’s Enterprise EPYC processor line, offering more frequency and a higher power budget, but fewer memory channels, fewer PCIe, and a lower memory capacity support. The 3990X is at that cusp between consumer and enterprise based on its features and cost, and it’s ultimately going to compete against both. On paper, users who don’t necessarily need all of the 64 core EPYC features might turn to the 3990X, whereas consumers who need more than 32 cores are going to look here as well. We’re going to test against both.

The TR3990X is part of the Threadripper 3000 family, and will partner its 32 core and 24 core brethren in being paired with new TRX40 motherboards. Despite the same socket as the previous generation Threadrippers, AMD broke motherboard compatibility this time around in order to support PCIe 4.0 from the CPU to the chipset, allowing for higher bandwidth configurations for extra controllers. We’ve covered all 12 of the TRX40 motherboards on the market in our motherboard and chipset overview, with a lot of models focusing on 3x PCIe 4.0 x16 support, multi-gigabit Ethernet onboard, Wi-Fi 6, and one even adding in Thunderbolt 3. 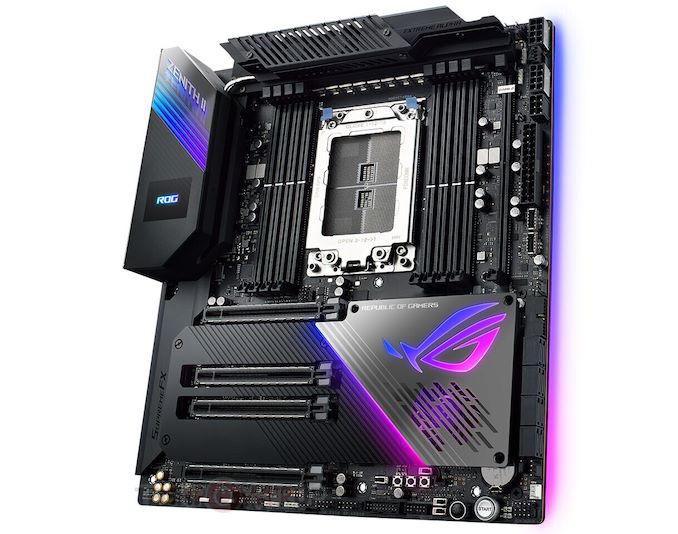 All the Threadripper 3000 family CPUs support a total of 64 PCIe 4.0 lanes from the CPU, and another 24 from the chipset (however each of these use eight lanes to communicate with each other). There are four memory channels, supporting up to DDR4-3200 memory, and each CPU has a rated TDP of 280 W. We’ve tested the 3970X and 3960X when those CPUs were launched – you can read the review here. 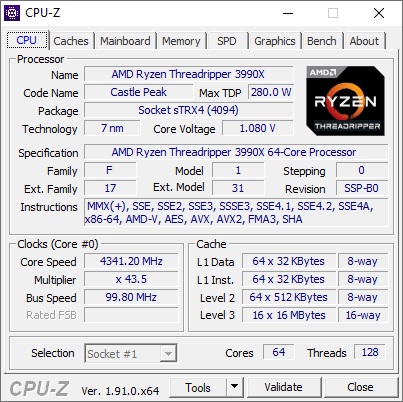 Who is This CPU Aimed At?

Not everyone needs 64 cores, and AMD has been very clear about this in their messaging. Even though the 3990X is part of AMD’s high-end desktop line, because it’s breaking new ground in core count and price, it sort of goes beyond the high-end, essentially eclipsing the prosumer/server market. This means users (and companies) that can amortize and justify the cost of the hardware as it enables them to complete projects (and therefore contracts) faster. For a user that needs to create something, rather than doing 25 prototypes a week, doing 100 per week makes their workflow a lot more complete, and it’s this sort of user AMD is going after.

Render farms that run on CPU is going to be a key example. AMD has already promoted the fact that several animation and VFX studios that produce effects in blockbuster films have been running engineering samples of the 64-core Threadripper processors for titles already in the market. Then there are video game production houses and architects, that want to rapidly prototype demo models and shorten the time to create each prototype – something that might not be able to be done on GPU (and isn’t AVX-512 accelerated).

The 3990X with 64 cores is $3990, double the cost of the 3970X with its 32 cores at $1999. Doubling the cores is an obvious step up, however there isn’t an increase in memory bandwidth or PCIe lanes, so users need to be sure that the CPU is the bottleneck of their workload.

We’re testing against the dual 8280s and the W-3175X as well. Please note our 2x8280 results are from an older review, and so it hasn’t been run on some of our newer benchmarks.

In this review, we want to cover the Threadripper 3990X in terms of frequency, temperature, power, and performance. There’s a big caveat we have to discuss in terms of operating system choice, which we’ll go into in the next few pages. But our main comparison points are dependent on whether you are a consumer looking at a faster desktop, or an enterprise user looking at an alternative server replacement. We’ll cover both angles here.