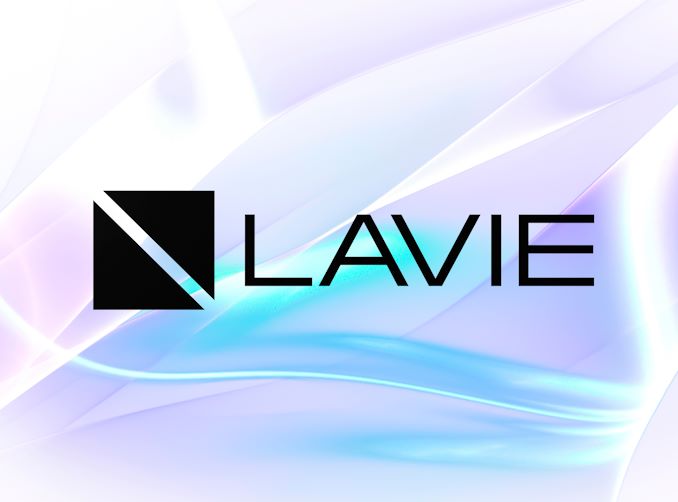 Lenovo has announced today that it will bring NEC computers back to the US market this spring. NEC’s PCs have always stood out from the crowd, but they disappeared from the US at the turn of the decade due to cut-throat competition and thin margins. Lenovo, which gained control of NEC’s Japanese PC business in 2011 – 2016, wants to offer three NEC LaVie machines in the United States.

The NEC LaVie systems in question are NEC's popular LaVie Pro Mobile thin-and-light notebook, the LaVie Vega higher-performance laptop with a 15.6-inch OLED display, and the LaVie Home all-in-one desktop. In French, ‘la vie’ means ‘life’, so we are talking about lifestyle computers which will target markets that are not currently addressed by Lenovo’s Idea-branded PC, thus strengthening the company’s positions in the USA in general.

In Japan, NEC's PC group has made a particular name for itself with its super light LaVie laptops, which are available in weights down to under 2 pounds. With Lenovo's reintroduction, those LaVie Pro Mobile laptops will finally be coming to the United States. The 13.3-inch class machine is tailored to be as portable as possible and to run on a battery for as long as possible, yet it has all hardware connectors that one comes to expect from a modern PC. 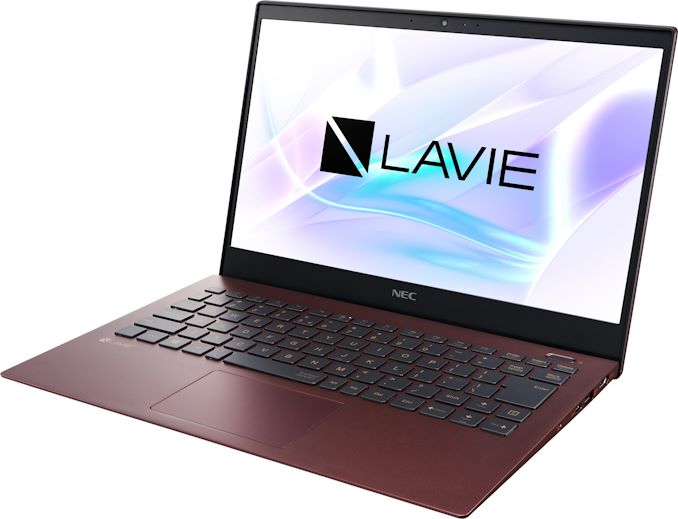 The NEC LaVie Pro Mobile comes in a stylish Bordeaux chassis with a magnesium-lithium bottom and a carbon fiber top. The notebook houses a 13.3-inch Full-HD IPS display with 300 nits max brightness, and an anti-glare coating, but there is no word regarding multitouch support. The materials used for the chassis enabled NEC to make its LaVie Pro Mobile only 15.5 mm thick and reduce its weight to 837 grams (~1.85 lbs), which makes it one of the industry’s lightest notebooks based on a Intel's more powerful U-series mobile CPUs. 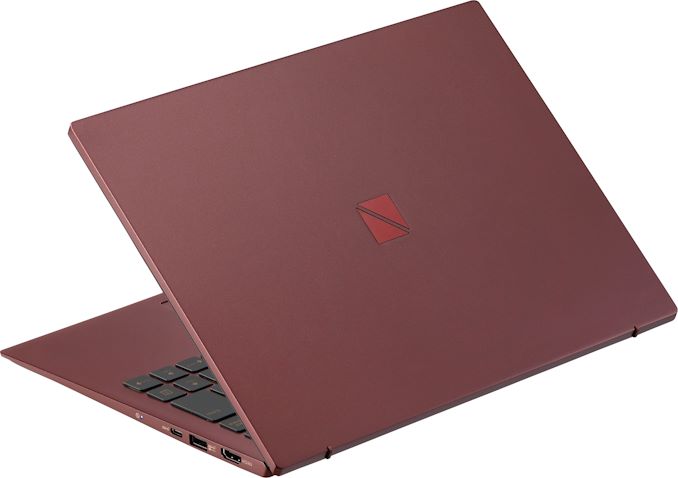 Speaking of CPU, Lenovo will use Intel’s 8th Gen Core processors (Whiskey Lake, up to Core i7-8565U) with up to four cores and UHD Graphics 620 for the LaVie Pro Mobile. The chip will be accompanied by up to 8 GB of soldered-down LPDDR3 memory, an up to 512 GB M.2-2280 PCIe SSD, and a 49 Wh battery. The latter promises to enable battery life of up to 15 hours (based on MobileMark 14), but this hardly concerns higher-end configurations. 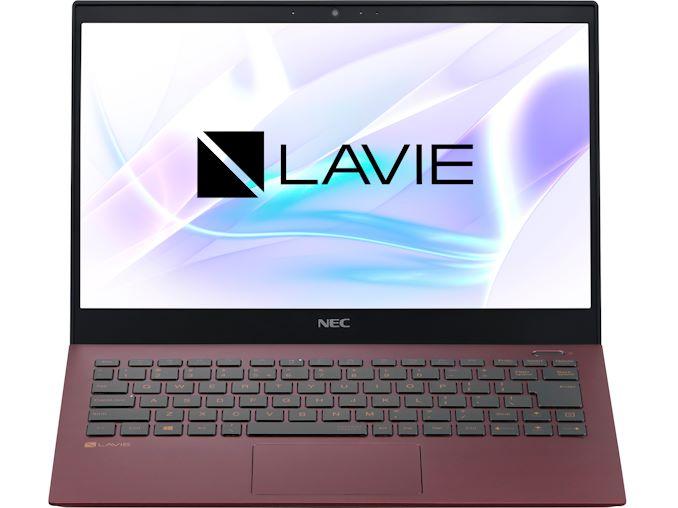 Connectivity department of the NEC LaVie Pro Mobile includes 2x2 Wi-Fi 5, Bluetooth 5.0, one USB 3.1 Gen 2 Type-A powers, two USB 3.1 Gen 1/Gen 2 Type-C ports, an HDMI 1.4b output, a microSD slot, and a 3.5-mm combo audio jack. Multimedia capabilities are comprised of a 720p webcam, 2W stereo speakers with Yamaha badge, and a microphone array. In addition, the PC has a fingerprint scanner in the power button. 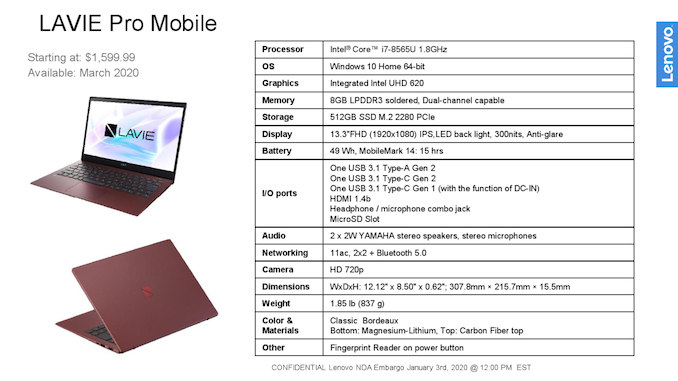 Lenovo will start sales of the LaVie Pro Mobile laptops in March at prices starting at $1,599.99.

Usually, 15.6-inch laptops are designed for performance-minded users, so there are just a few models that are thin, light, and stylish. To that end, Lenovo decided to address this largely untapped market with its rather unique NEC LaVie Vega notebook. 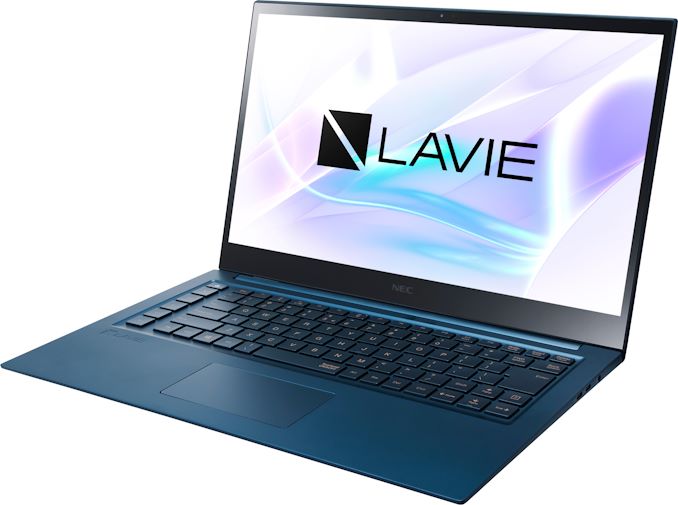 The laptop comes in an aluminum chassis with a blue finish with Corning Gorilla Glass 6 on display lid to add some bling and make the whole structure somewhat more rigid and resistant to scratches. Another notable feature of the notebook is a special Smart Light LED on the front panel, which reacts to voice assistant commands. The La Vie Vega weighs 1.84 kilograms and is 18.3 mm thick, which means that it is not the lightest 15.6-inch notebook around, but is also not as heavy as other machines in the class. 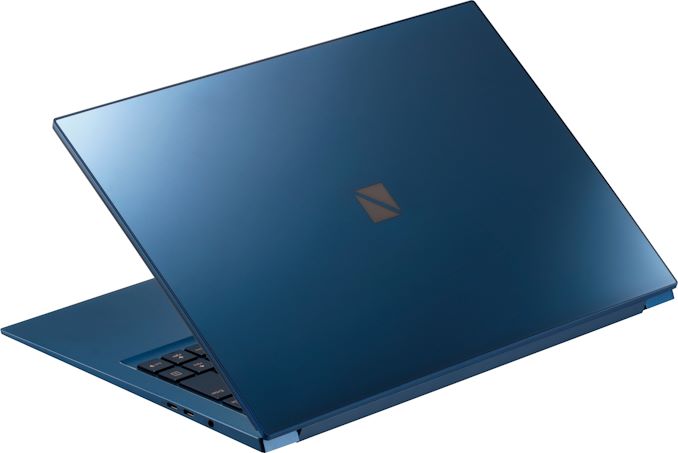 In addition to the eye-catching design, one of the key selling points of the NEC La Vie Vega is its factory-calibrated 15.6-inch Ultra-HD OLED display with a maximum brightness of 400 nits and all the benefits that OLED has to offer, such as a very high contrast ratio, a low response time, and wide horizontal viewing angles. 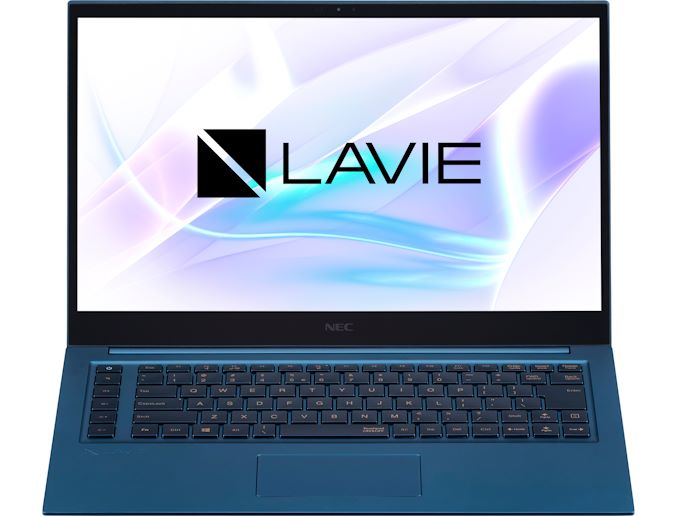 At the heart of the LaVie Vega is Intel’s 9th Generation Core processor, which offers up to six cores and UHD Graphics 630 (up to Core i7-9750H). This is paired with up to 8 GB of DDR4-2666 memory as well as a hybrid solid-state storage solution comprising of 32 GB of Intel Optane Memory and a 512 GB Intel 3D QLC-NAND-based SSD.

Connectivity-wise, the LaVie Vega has a 2x2 Wi-Fi 6 + Bluetooth 5 adapter on the wireless side of matters. The wired section features two Thunderbolt 3 ports, two USB 3.1 Gen 2 Type-C connectors, a microSD card reader, and a 3.5-mm TRRS headset jack. As for multimedia features, the laptop is equipped with a Windows Hello-compatible 720p webcam, a couple of 2W Yamaha-badged speakers, and a quad-microphone array.

When it comes to battery life, Lenovo promises that its NEC LaVie Vega can work for up to 8.3 hours on one charge of its rather whopping 80 Wh battery (according to MobileMark 14). 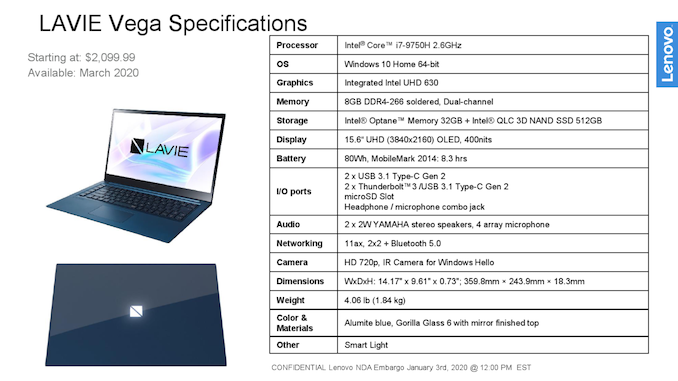 The NEC LaVie Vega will hit the market in March and will carry an MSRP starting at $2,099.99.

As the name suggests, the LaVie Home All-in-One PC is designed primarily for home users and therefore is tailored primarily for entertainment purposes. The computer comes in a Fine White chassis and features design that should blend with almost any environment. The system borrows some elements from Lenovo’s own IdeaCentre Horizon from 2013, but unlike the giant 27-inch tablet, this AIO desktop offers performance of a higher-end laptop and is not touch enabled. 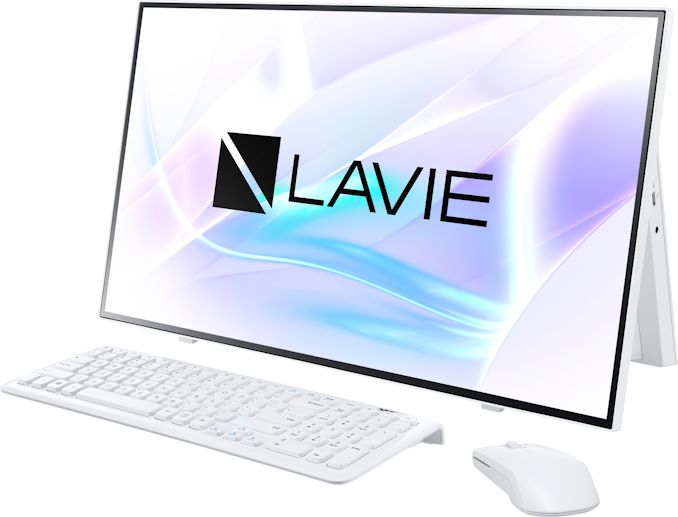 One of the key features of the LaVie Home All-in-One is its 27-inch Full-HD IPS display with very narrow bezels that clearly make the AIO system somewhat more compact. Furthermore, the screen relies on LG’s Crystal Sound Display technology, so it acts not only as it should, but also as speakers by vibrating its surface. To make the sound better, Lenovo asked Yamaha to tune the sound system. Also, the PC has a quad far-field microphone array. 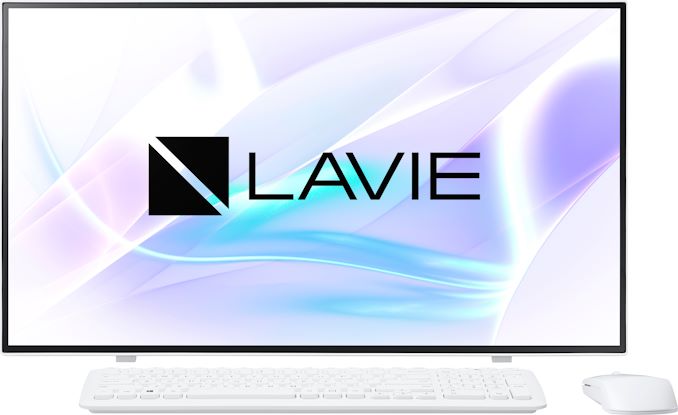 From internal hardware point of view, the LaVie Home AIO has everything one would expect from a modern laptop, including Intel’s 10th Gen Core processor (Comet Lake) with UHD Graphics, 8 GB of DDR4-2666 DRAM, a 256 GB M.2-2280 PCIe SSD, and a Wi-Fi 6 + Bluetooth 5 adapter. Meanwhile, since the system has some additional space inside (when compared to mobile PCs), it also packs a 3 TB 5400 RPM hard drive and a DVD±R optical drive (why not Blu-ray?). As for connectivity, everything is pretty standard: a GbE port, USB 3.1 Gen 1/Gen 2 connectors, an SD card reader, and a 3.5-mm audio jack for headsets.

The LaVie Home AIO will come with a wireless keyboard and a mouse. Meanwhile, the system can be controlled using Microsoft’s Cortana and Amazon’s Alexa. 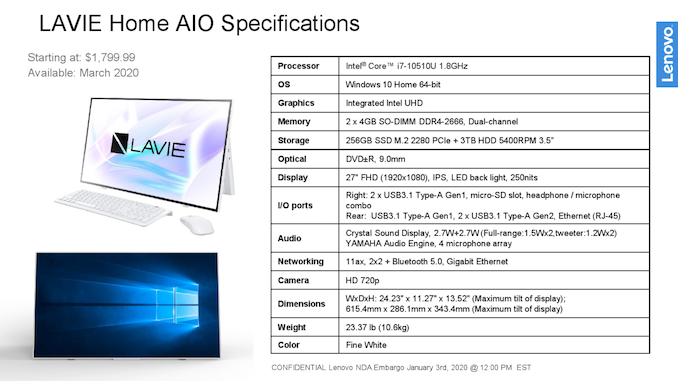 Lenovo commanded 24.7% of the global PC market back in Q3 2019, leaving behind HP and Dell, according to IDC. The company is also believed to be the dominant player on the Japanese PC market to a large degree because it controls popular brands like ThinkPad, Fujitsu, and NEC/LaVie. At the same time, the firm trailed both of its rivals significantly in the US by a large margin (15% vs 26.7% owned by Dell), which may indicate that Lenovo sees growth opportunities in the country.

By bringing some of its NEC LaVie machines to the US, Lenovo is perhaps trying to use the multi-brand strategy with precisely tailored offerings that helped it to become the No. 1 PC supplier in Japan. Keeping in mind that many buyers of high-end computers clearly want differentiation and might want to get a NEC for this reason, returning the brand to the US might help to tap this kind of customers and increase revenue/profits. Meanwhile, it remains to be seen whether the NEC brand in the US will enable Lenovo to increase its market share because we are talking about pretty expensive systems here.