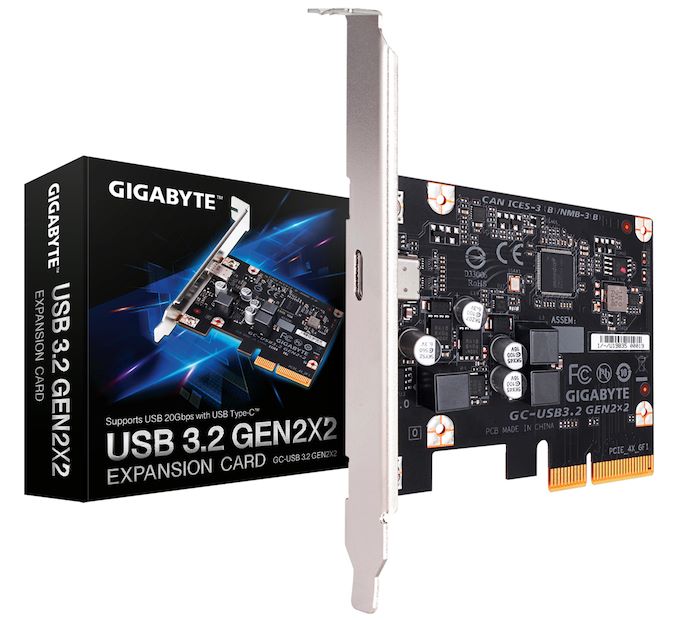 GIGABYTE has introduced the industry’s first PCIe expansion card for USB 3.2 Gen2x2 ports. Offering the latest generation in USB connectivity, with a total throughput of 20Gbps, the board adds a single Gen2x2-capable USB-C port for systems to take advantage of the higher throughput USB standard.

The GIGABYTE GC-USB 3.2 Gen 2x2 PCIe expansion card is based on the ASMedia ASM3242 host controller, which allows for data transfer rates of up to 20 Gbps (2.5 GB/s) when working with compatible devices. The same controller is used on various AMD TRX40-based motherboards and will likely be used on other platforms to enable the standard as well. The card relies a PCIe 3.0 x4 slot, and atypically for USB-C add-in cards, doesn't require an additional power plug to drive the card or attached peripherals.

As a quick refresher, the USB 3.2 Gen2x2 uses two high-speed USB Type-C Tx/Rx channels to achieve 20 Gbps maximum throughput. By doubling the number of USB high speed data channels in use, the 2x2 standard is a very straightforward extension of USB 3.2 Gen2, taking advantage of the additional high speed lanes offered in a USB-C cable. To date we've only seen these extra lanes used for alt mods (e.g DisplayPort and Thunderbolt), but the USB-C cable was always designed with this in mind, and now the necessary controllers are finally catching up.

We're still in the very early days of USB 3.2 Gen2x2 devices, however we're expecting to primarily see Gen2x2 used as an alternative, lower cost option for providing high speed I/O to high-performance DAS devices and similar peripherals. This has traditionally been the domain of Thunderbolt 3, which although faster (40Gbps), requires more expensive controllers as well as more expensive cables. USB 3.2 Gen2x2, on the other hand, works with standard Gen2 USB-C cables, and the actual PHY isn't any more complex than a single USB channel. So it should allow for cheaper I/O to devices that only need upwards of 20Gbps of bandwidth.

GIGABYTE says that the first batch consisting of as many as 100 GC-USB 3.2 Gen 2x2 PCIe expansion cards has already been sold out, and the manufacturer is promising to release a new batch shortly. The company has yet to publish official pricing for the add-in card.