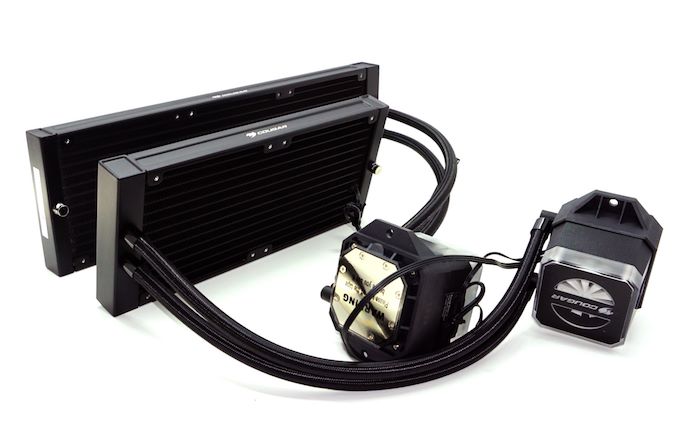 While far from a new player in the computer peripherals market, Cougar is a brand that is now, almost a decade later, only finally rising to broad prominence within the PC industry. Founded in 2008 as a subsidiary of HEC/Compucase, one of the oldest and most experienced players in the OEM PC market, the company’s mission was to develop advanced PC-related products for gamers and enthusiasts. Specifically, HEC created Cougar to build off of their experience in the OEM market and apply it to retail products for enthusiasts, with Cougar branching out into more and more products over time.

Cougar started off subtly, releasing just a couple of products back in 2008 and staying almost completely focused on PC cases for the first couple of years. Their entrepreneurial endeavor proved highly successful and the company quickly began diversifying into other segments of the market, ranging from chairs to mechanical keyboards. Today, the company’s product portfolio consists of several dozens of products, and Cougar is still adding to it.

Jumping to the present, as one of their most recent expansions Cougar has entered the competitive-but-lucrative cooling market. So for today's review we are taking a look at Cougar’s new Helor CPU coolers, which are the company’s not-so-subtle attempt to dive into the liquid all-in-one CPU cooler market. Where most manufacturers would start with a simple, practical product when diversifying into a fresh segment of the market, Cougar developed two extravagant liquid coolers with RGB lighting. The two coolers are virtually identical, with the only vital difference being the size of the radiator (240 mm and 360 mm). We are taking a close look at both coolers in this review, examining their unique features and checking where they stand in terms of thermal and acoustic performance.

Cougar supplies the Helor coolers inside large, sturdy cardboard boxes. Although the core aesthetic design of the box retains the black/orange color theme of the company, the pictures of the products themselves make the box a parade of colors, with the designer showing off the RGB lighting capabilities of the coolers. Inside the box we found the coolers and their parts  well protected by custom cardboard inserts. 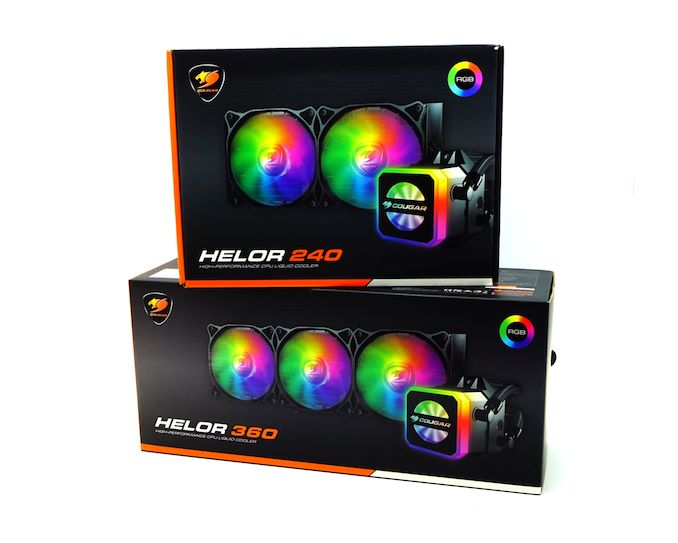 Inside the box we found a rather rich bundle for a CPU cooler. Cougar supplies a stand-alone RGB controller and a remote control, the necessary cables for powering the fans and the controller, a dose of thermal compound, a bottle with coolant, and the hardware necessary for the mounting of the cooler onto the CPU socket (with the exception of TR4 processors – the Helor is not compatible with them). 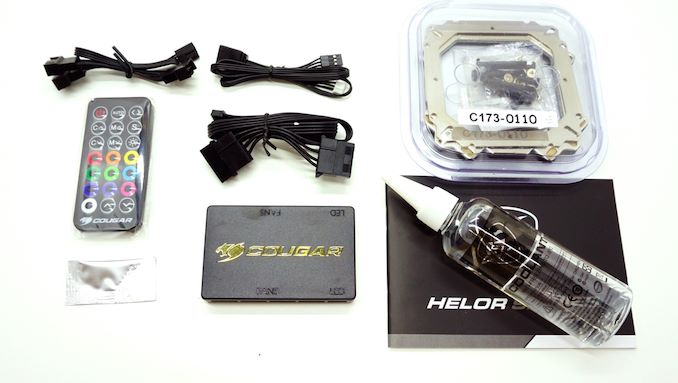 Depending on the version of the Helor cooler, you will receive two or three 120 mm fans for their radiator. Cougar supplies the Vortex Omega 120 fan that sports both a unique frame design and an advanced hydraulic bearing engine. We are unsure who the original manufacturer of the fan is. Its part number is DF1202512SELN, identical to a very popular fan that has been around for over a decade, but that is where their similarities end. The Vortex Omega fans sport ten RGB LEDs and a semi-transparent blade assembly that is designed to softly diffuse the lighting of the LEDs. 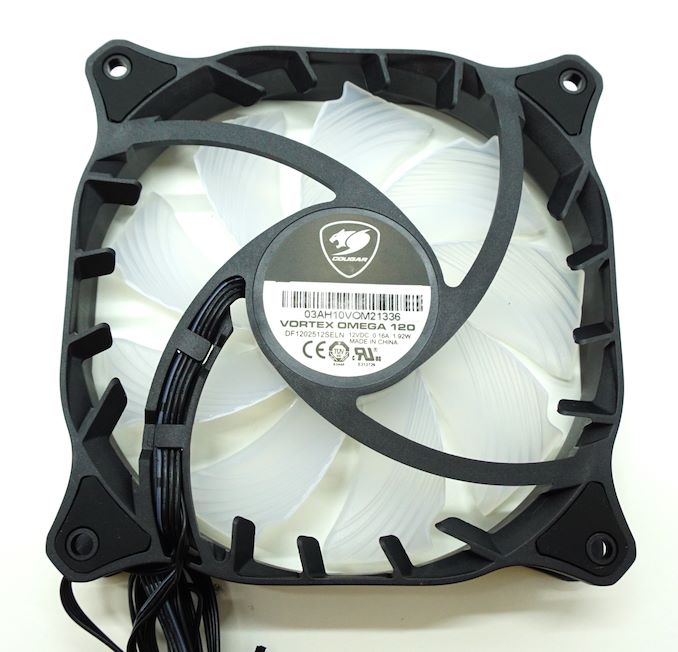