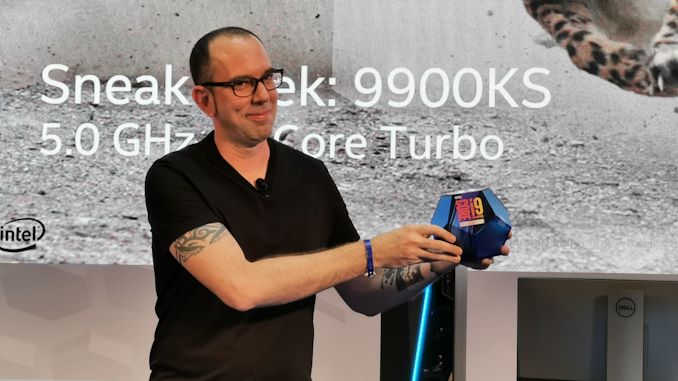 At its pre-IFA press event, Intel confirmed that its new enthusiast-class Core i9-9900KS processor will launch in October. The CPU will be very similar to the Core i9-9900K introduced last year, but will feature a higher all-core Turbo frequency when it has sufficient cooling.

The Intel Core i9-9900KS will feature eight cores with Hyper-Threading running at 4.0 GHz base frequency and boosting all the way to 5.0 GHz on all cores, up 300 MHz from 4.7 GHz in case of the Core i9-9900K. Essentially, the new CPU is just an eight-core Coffee Lake Refresh silicon binned to hit higher clocks when cooling is good enough.

Intel first teased the Core i9-9900KS ahead of Computex earlier this year, so the product launch is not a surprise. The important thing is that the CPU will finally hit the market this October.

In a bid to maintain an intrigue, Intel did not disclose TDP of its new product. Besides, the company also did not disclose launch price of its Core i9-9900KS and we are curious to find out how much will the chipmaker want from its new range-topping enthusiast part.