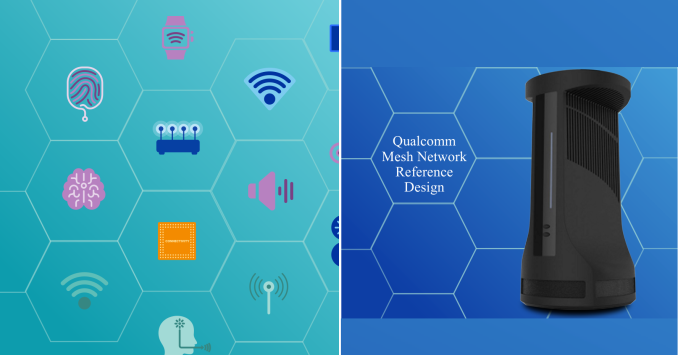 The last couple of years has seen rapid proliferation of mesh networking kits / whole-home Wi-Fi systems in the market. Recent market research suggests that the mesh network segment is almost up to a quarter of the whole Wi-Fi router market. Almost all of the Wi-Fi system kits currently in the market (such as the Netgear Orbi, TP-Link Deco, D-Link Covr, Luma, eero etc.) are based on Qualcomm silicon. Notable exceptions are the Securifi Almond 3, Amped Wireless Ally, and the Ubiquiti Networks AmplifiHD (the AmplifiHD is also based on Qualcomm silicon).

As part of the 2017 Computex announcements, Qualcomm is taking the lead in formalizing the roadmap for mesh routers. Most of the mesh networking features are based on Qualcomm's Wi-Fi SON (self-organizing networks) set of firmware features. Qualcomm is terming the current set of features as 'Mesh Networking 1.0'. Today's announcement is a reference design (the Qualcomm Mesh Networking Platform) which includes / improves these existing features, and also adds some IoT functionality.

The reference design is based on the IPQ40x8/9 platform with Wi-Fi SON functionality integrated. The IPQ40x8/9 is Qualcomm's dual-radio networking SoC, which has the option to add a third radio via its PCIe lanes. As part of a reference design for the next-generation mesh networking systems, the following features are added as part of the firmware and accompanying hardware to the SoC:

Qualcomm expects the market for mesh networking systems / whole-home Wi-Fi systems to expand significantly in the future. Machine learning (in terms of better smart home functionality) with a judicious mix of edge and cloud-based intelligence is expected to be a major component when the third-generation mesh platform rolls out.

A major chunk of the new functionality (IoT functionality and voice assistant capabilities) already exist today in the Securifi Almond 3. Securifi is one of the pioneers in integrating smart home / IoT functionality into a Wi-Fi router. The Almond 3 is based on a Mediatek platform, and the company has put in extended effort to ensure that the IoT functionality is integrated well with the router functionality from the user-experience perspective. Qualcomm's integration of these features into a reference design will enable more vendors to bring such systems into the market without expending a lot of effort.