With the exception of the new logo, the Corsair Gaming K70 RGB looks identical to the Vengeance K70 that we reviewed a few months ago. It features an anodized brushed aluminum chassis, with the keys secured directly on its surface rather than being embedded into it. Aesthetically, some people love this design while others hate it. With aesthetics being a completely subjective matter, we will let you decide what you think about the appearance of the K70 RGB. From a purely practical point of view, the Corsair Gaming K70 RGB is extremely easy to clean, as a simple blow can remove all debris from the aluminum surface of the keyboard. 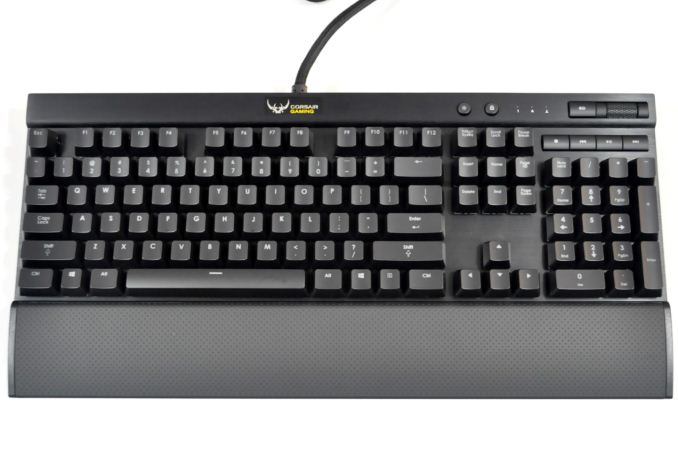 Besides the typical 104 keys of a full-sized keyboard, the K70 RGB also has seven extra keys and a volume control knob. Four of them are media control keys (Play/Pause, Stop, Forward, and Back), one is the volume mute button, and the two smaller keys towards the center are the windows key lock and the backlighting brightness control. Three very small white LED lights serve as the three standard key lock indicators (Caps Lock, Num Lock, Scroll Lock). The LED lights of the indicators are the only lights that are not customizable on the K70 RGB as, most likely due to their tiny size, Corsair was forced to install just white LED lights under them.

The Corsair Gaming K70 RGB is available with three types of Cherry MX switches: red, brown, and blue. Cherry MX Black switches are not very popular due to their stiffness, so it is understandable that Corsair skipped them entirely. We received the version with the Cherry MX Red switches for our review.

The Cherry MX Red switches are relatively soft and linear, with no tactile actuation feedback, making them the most comfortable and least noisy mechanical switch. Make no mistake, the Cherry MX Red is not anywhere near noiseless, as mechanical switches will always make a sound once they bottom down. The only thing that is missing is the audible click at the actuation point, which is especially loud in the case of the Cherry MX Blue switches. The lack of tactile feedback dissuades some users, more commonly typists, who enjoy the tactile feeling, and even sound, of other switches. However, this is not an absolute rule and the selection of switches greatly relies on the preferences of the user. 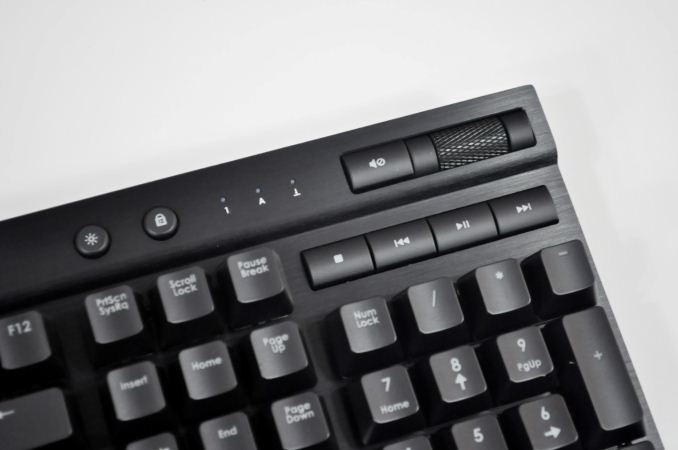 Beneath the typical black keycaps are the new Cherry MX RGB switches. There is a major difference between the typical Cherry MX switch and the Cherry MX RGB switch that Corsair is using and that is how the lighting is implemented. The switch may be identical in terms of behavior and performance but, instead of a single LED at the top of the switch, the body of the switch itself is transparent and there are RGB LED lights installed in it.

The transparent body of the switch absorbs and diffuses the lighting evenly around the switch, creating a lighting effect far superior than what we previously seen with RGB backlighting in keyboards. Regardless, due to the position of the LED lights, the top character of the keycap is brighter than any bottom character (if present).

The keys of the Corsair Gaming K70 RGB feel very solid and cross type supports can be found under the five long keys (Space, Shift, Enter, and Backspace), which prevent the keys from wobbling. Cross supports will also distribute the actuation force, meaning that the key will require about the same actuation force regardless of the pressure point. 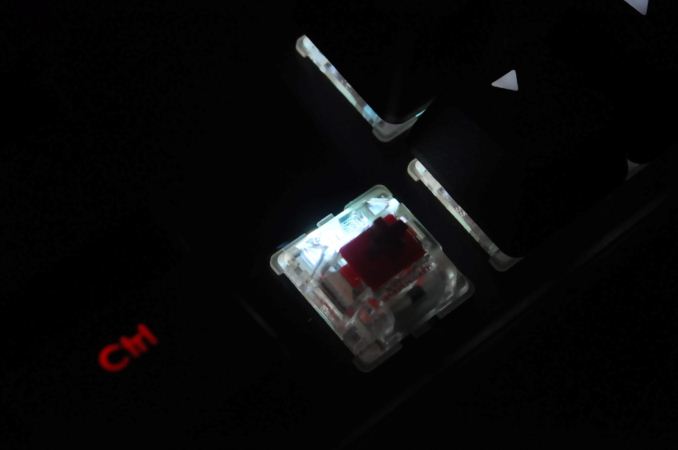 As far as lighting customization goes, if you can think of it, the Corsair Gaming K70 RGB can probably do it. Besides the limitless selection of colors, each single key can be programmed to a different color, brightness, and/or effect. Keys can be grouped in order to produce effects that are more complex, and lighting effects can be programmed to initiate when specific events take place (e.g. when a macro is initiated or when a timer ends). Different lighting settings can be programmed for each profile, even for each different mode. We will examine some of these options on the following page as we go through the new CUE software. 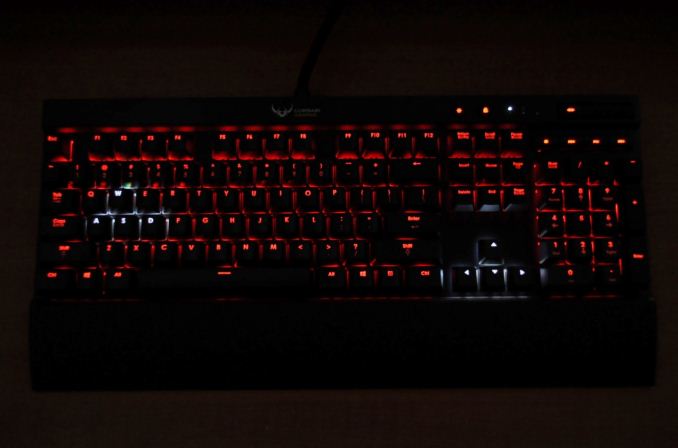 Despite the thick cable and two USB connectors, the Corsair Gaming K70 RGB has no USB ports at all, which is a downgrade over the previous Vengeance K70 that had one USB port. At the back of the keyboard there's a switch that can adjust the polling rate of the keyboard. This function will be useless with modern systems but may enhance the compatibility of the keyboard with older systems and certain devices, such as cheap KVM switches. The default polling rate is 1ms (or 1kHz) and the user can reduce it to 2ms, 4ms, or 8ms.

There is also a fifth mode, the "BIOS" mode, which converts the Corsair Gaming K70 RGB into a typical 104-key keyboard, disabling the media keys and all advanced features. This mode offers maximum compatibility and is most likely reserved only for very old systems or certain BIOS versions. In this mode, the Scroll Lock LED indicator will blink. Frankly, it's doubtful anyone would use a keyboard such as this with a system that couldn't properly support all of the advanced features, but it might be useful at times for debugging purposes.

Under the aluminum chassis we find excellent assembly work. The soldering job is textbook, without a single flawed point. Not unsurprisingly, the processor inside the Corsair Gaming K70 RGB is not a commonly seen Freescale processor, like the one we found in the Vengeance K70, but instead it's an NXP LPC11U37F-501. This microcontroller has about the same processing power as the commonly used Freescale MC9S08JM32, but it has four times the flash memory, six times the static RAM, and eight times the USB RAM. 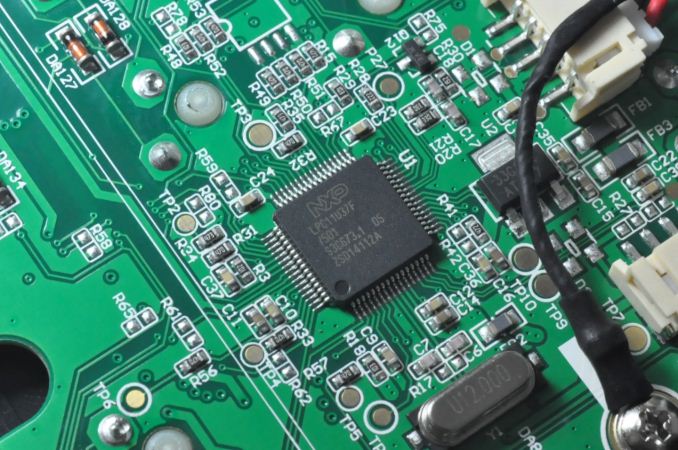