It's a Cluster, Not a Server

When unpacking our Boston Viridis server, the first thing that stood out is the bright red front panel. That is Boston's way of telling us that we have the "Cloud Appliance" edition. The model with an orange bezel is intended to serve as a NAS appliance, purple stands for "web farm", and blue is more suited for a Hadoop cluster. Another observation is that the chassis looks similar to recent SuperMicro servers; it is indeed a bare bones system filled with Calxeda hardware.

Behind the front panel we find 24 2.5” drive bays, which can be fitted with SATA disks. If we take a look at the back, we can find a standard 750W 80 Plus Gold PSU, a serial port, and four SFP connectors. Those connectors are each capable of 10Gbit speeds, using copper and/or fiber SFP(+) transceivers.

When we open up the chassis, we find somewhat less standard hardware. Mounted on the bottom is what you might call the motherboard, a large, mostly-empty PCB that contains the shared Ethernet components and a number of PCIe slots. 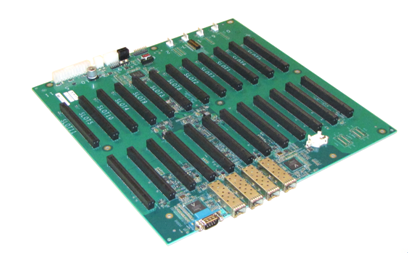 The 10Gb Ethernet Media Access Controller (MAC) is provided on the EnergyCore SoC, but in order to allow every node to communicate via the SFP ports, each node forwards its Ethernet traffic to one of the first four cards (the cards in slots 0-3). These nodes are connected via a XAUI interface to one of the two Vitesse VSC8488 XAUI-to-serial transceivers that in turn control two SFP modules each. Hidden behind an air duct is a Xilinx Spartan-6 FPGA, configured to act as chassis manager.

The chassis can hold as many as 12 EnergyCards, so currently up to 48 server nodes. That limit is only imposed by physical space constraints, as the fabric supports up to 4096 nodes, leaving the potential for significant expansion if Calxeda maintains backwards compatibility with their existing ECs. 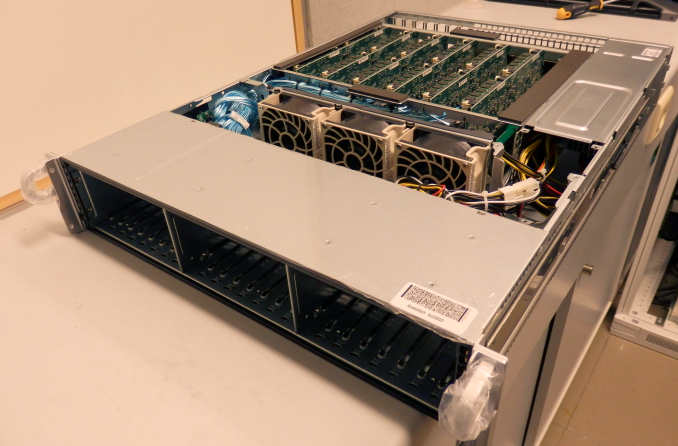 The system we received can only hold 6 ECs; one EnergyCard slot is lost because of the SATA cabling, giving us six ECs with four server nodes each, or 24 server nodes in total. Some creative effort has been made to provide air baffles that direct the air through the heat sinks on the ARM chips.

The air baffles are made of a finicky plastic-coated paper, glued to gether and placed on the EC with plastic nails, making it difficult to remove them from an EC by hand. Each EC can be freely placed on the motherboard, with the exception of the Slot 0 card that needs a smaller baffle.

Every EnergyCard is thus fitted with four EnergyCore SoCs, each having access to one miniDIMM slot and four SATA connectors. In our configuration each miniDIMM slot was populated with a Netlist 4GB low-voltage (1.35V instead of 1.5V) ECC PC3L-10600W-9-10-ZZ DIMM. Every SoC provided was hooked up to a Samsung 256GB SSD (MZ7PC256HAFU, comparable to Samsung’s 310 Series consumer SSDs), filling up every disk slot in the chassis. We removed those SSDs and used our iSCSI SAN to boot the server nodes. This way it was easier to compare the system's power consumption with other servers.

Previous EC versions had a microSD slot per node at the back, but in our version it has been removed. The cards are topology-agnostic; each node is able to determine where it is placed. This enables you to address and manage nodes based on their position in the system.