Probably the largest single readily identifiable change in WP8 is what’s been done with the positioning and layout of live tiles on the start screen. In WP8 there’s no longer an asymmetric layout with black bar at the far right. I’m told that internally this move away from asymmetry was something many felt strongly about since it was a big part of the original metro design language, but at the end of the day increasing the usable space for tiles on the start screen makes sense — after all, you’ve ostensibly paid for those pixels. In addition, shoppers looking at a Windows phone with those unused pixels at the sides were subjectively gauging the display as smaller than other phones on the shelf, even though sometimes they were the same size or larger. 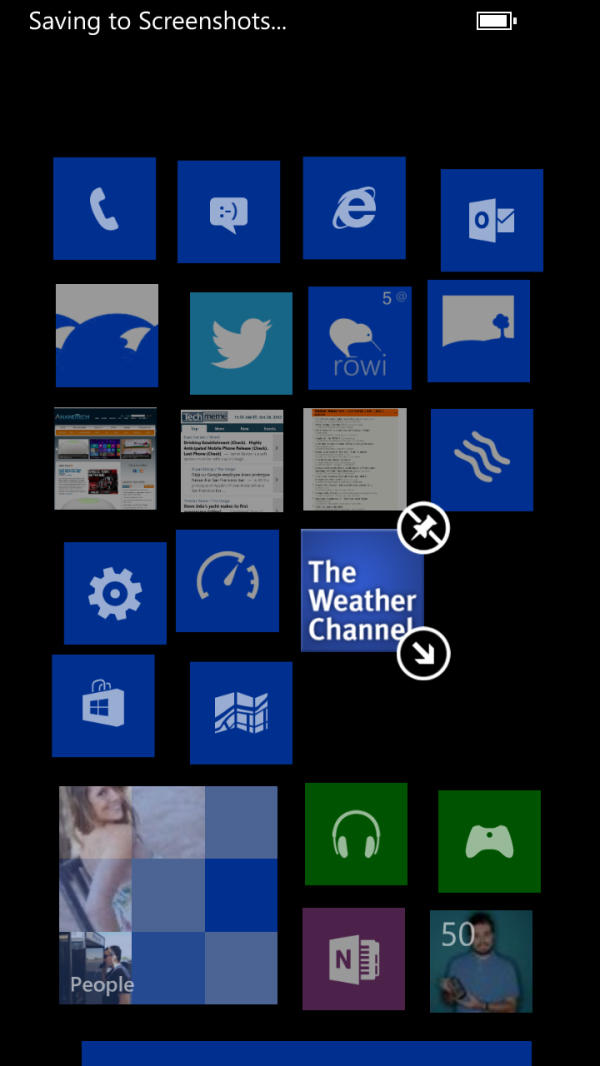 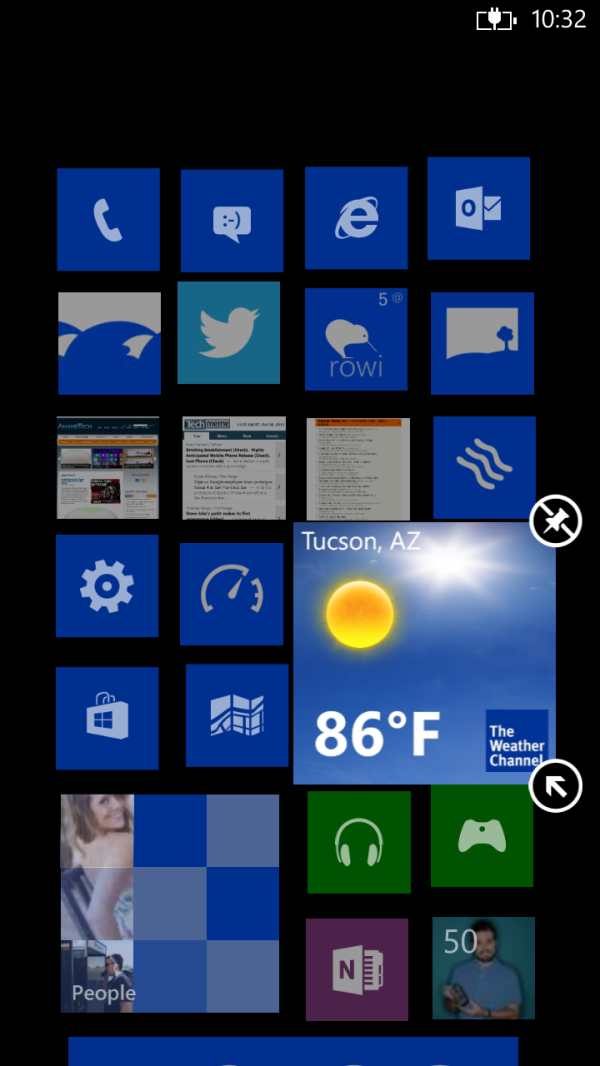 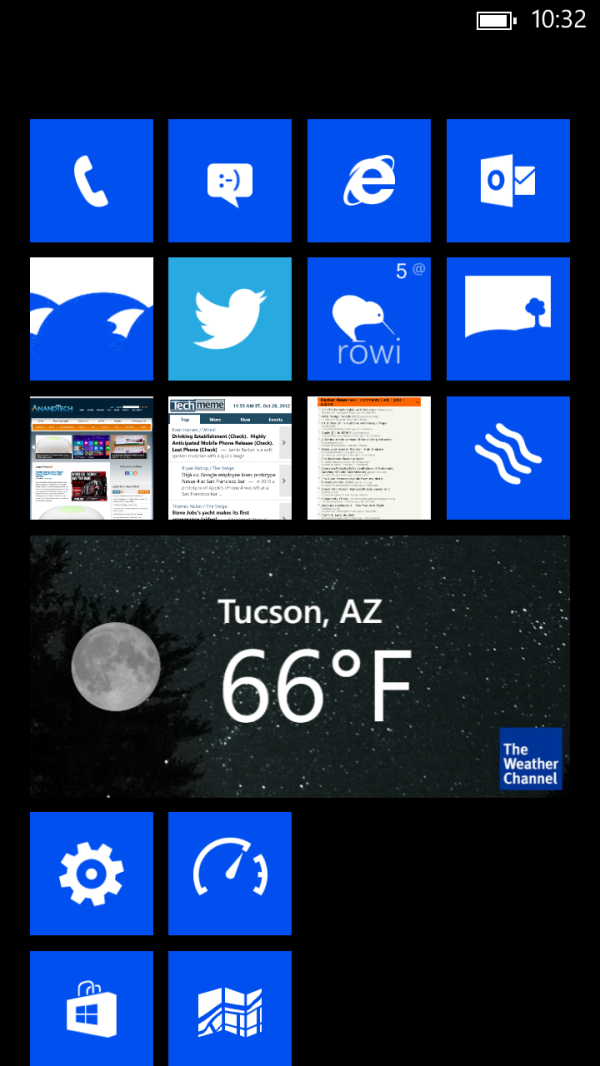 The other huge change is the inclusion of a new smaller live tile size. WP7 previously had two live tile sizes, a single and double width size. The new smaller size splits the single wide size into a 2x2 grid. The end result is a fundamentally different start screen grid appearance in WP8 and WP7.8. Adding the smaller size is a definite improvement that results in a much needed increase in informational density without sacrificing too much of what made the start screen on WP7 so striking.

Applications can expose different live app information on the live tiles depending on which of the three tile sizes has been selected. The smallest size ends up usually just being a shortcut for a lot of third party apps, but Microsoft has done a good job not sacrificing too much at the smallest live tile size for their first party apps. Apps that haven’t updated to support WP8 yet only expose the smallest and single wide sizes, which are mandatory. Only newer apps can expose the double wide size from what I’ve encountered, and that size is actually optional.

Another big user-facing change is to the lock screen, which now allows for much more customization. Previously the lock screen would show upcoming calendar events at the bottom in a detailed view, in WP8 this now can be changed to reflect either unread messages, emails, or even metadata from applications that talk through an API. There’s a list under the lock screen settings page which lists the available options. The background on the lock screen similarly can be customized by applications or remain set to just a static image. 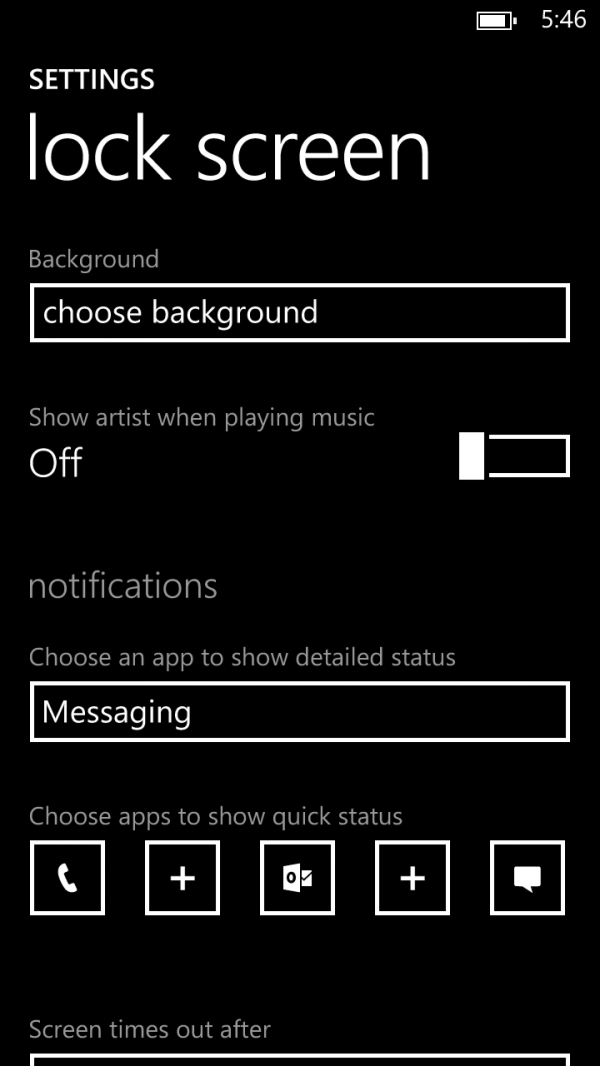 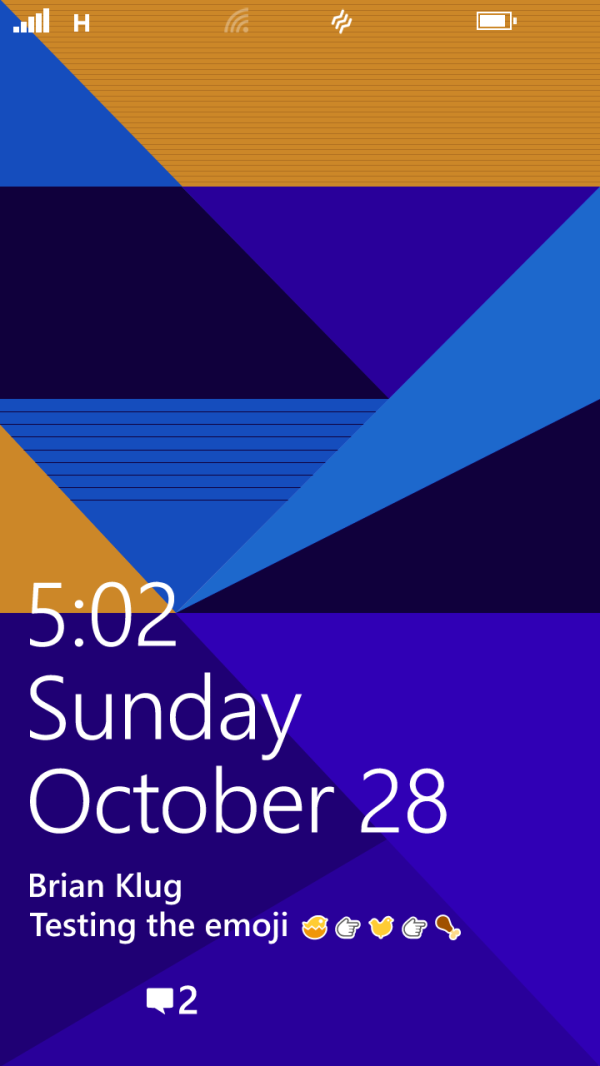 At bottom are also five smaller tabs which can show statuses as well, for example the number of missed calls, unread messages or emails. These can also show data from third party applications. The result is more customization for the lock screen which previously was relatively immutable besides the calendar detail information at the bottom. There’s another change to the unlock PIN workflow as well which forces the user to enter a phrase upon final password entry attempt. The goal there is to lessen accidental device wiping if you’re quickly typing the PIN but getting a key wrong. 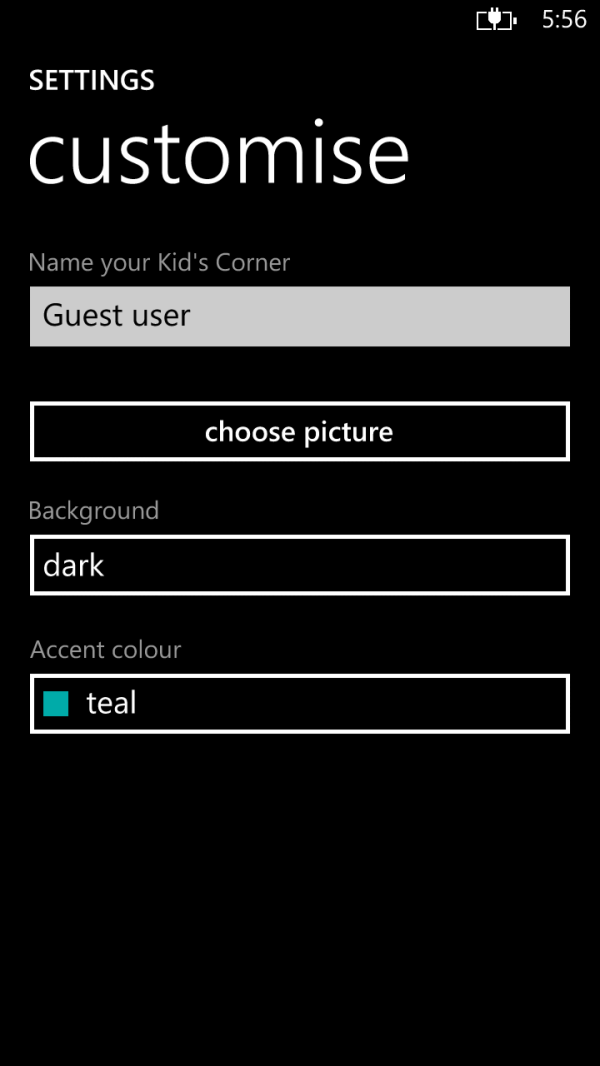 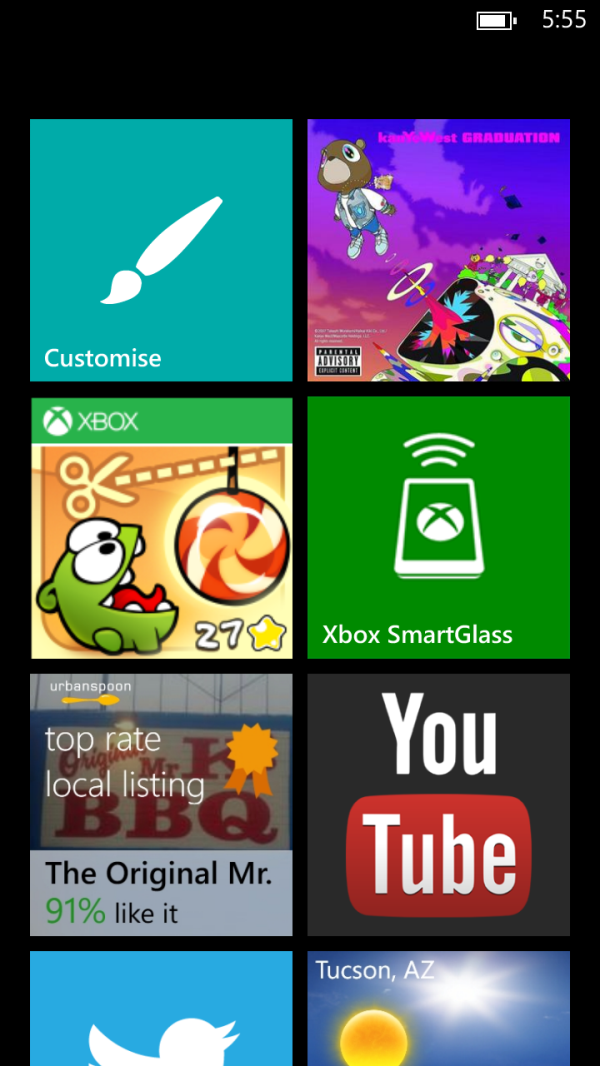 Along the lines of the lock screen is another new feature which has been dubbed “Kid’s Corner.” In reality kid’s corner is more of a guest’s corner, and is a rough approximation of multiuser support for smartphones. You can basically guess what this is — device owners can granularly select apps, videos, photos, and music that can be accessed in the guest view, which gets its own theme and start screen layout. This can be launched by sliding the lock screen to the left rather than up. The goal is to have a small walled garden of content and applications on the phone for use either by a child or guest, and prevent embarrassing email replies or tampering. Again, I view this more as a realistic mitigation for prankster friends changing their contact details, texting others as me, though the kid-access perspective makes sense as well.

Unfortunately the actual implementation lacks a guest account sandbox for applications, which is what it really needs to be a true multiuser approximation. At present, if you grant access to a particular application, the user data sandbox goes along with it, meaning if I tick the box for Twitter, the credentials go along with it. What is nice is that links to the browser don’t include the address bar, which does help prevent escaping the walled garden somewhat.

Apple and Google aren’t the only one implementing vector maps this refresh, and in WP8 Bing Maps gets an update which leverages some of Nokia’s own mapping infrastructure and expertise. The new maps application again includes vector streets, points of interest, labels, and assets. In aerial view the streets remain vector and get overlaid atop the aerial photography. 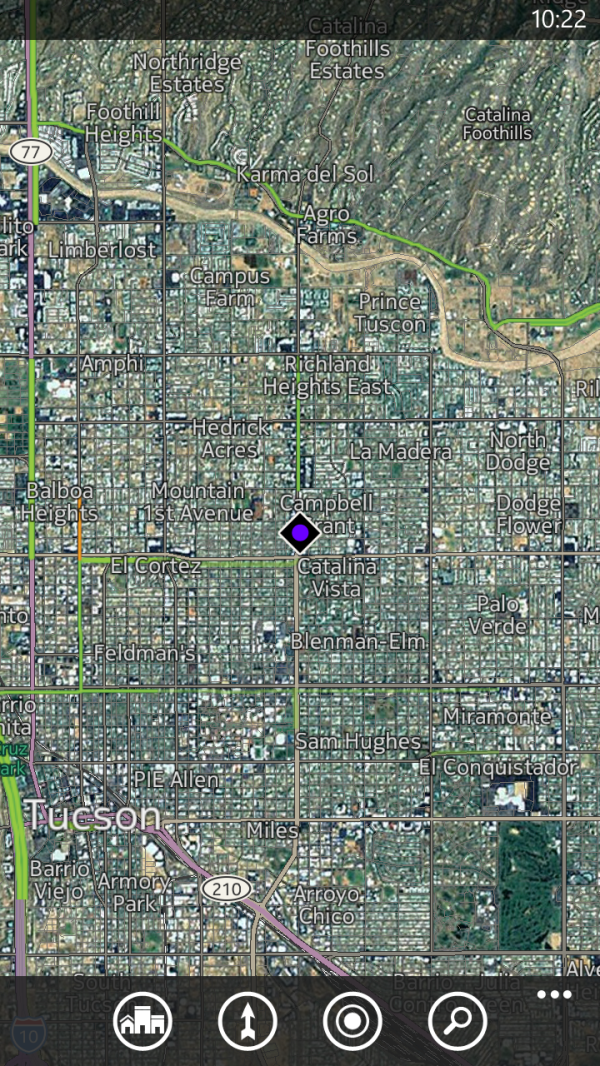 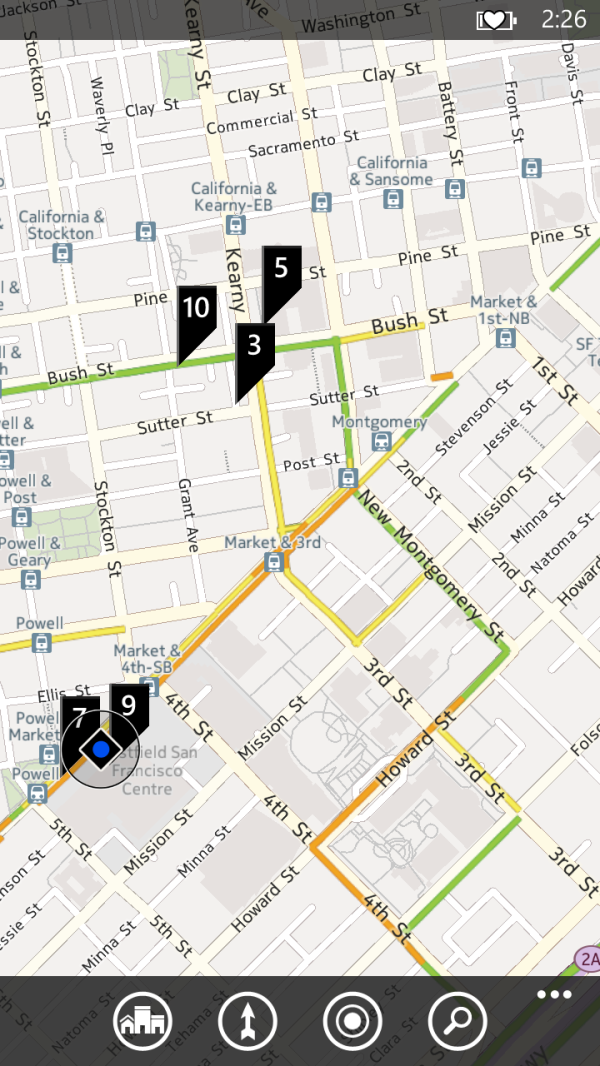 The application is consistently performant and Nokia’s considerable GIS experience really helps out here. In addition the new application adds the ability to cache map assets offline by region or country.

Improvements to the Hubs

One of the major original differentiators for Windows Phone was the concept of hubs — a number of applications designed to bring together various workflows under one easy to understand roof. Each successive update to the platform has brought steady improvements to those hubs, and this wouldn’t be an update without more of that happening. The People hub gets tweaked with the addition of two major new features, Groups and Rooms.

With Groups, you can create a custom list of people to follow and view details about. This is the mitigation for how sometimes the People tab would cause everyone to get lost in the background noise with so many updates and details from everyone in your contacts list. I created a small group with friends and it works as expected, essentially creating a smaller filtered view.

Rooms is an entirely new concept that leverages a number of Microsoft products. Rooms is an invitation-only space for a group of people to chat with each other, share a calendar, and share photos. A room concept could be a family sharing information back and forth with their schedules and photos. My initial concern was that functionality would be limited only to WP8, but Rooms also works with other platforms as well. Chat works using a special tunneled version of MSN messenger under the hood, but the other two are relatively painless — calendar exposes itself as CalDAV, and the shared photo album works through SkyDrive. Other platforms basically browse and interact through the web.