Value SOHO
The small office/home office machine has a unique set of requirements. It must provide quick and snappy 2D performance and be very stable. The keys to good performance on such a machine is lots of RAM and a fast hard drive. This system should be able to run almost anything that most business users might throw at it.

Processor – Intel Celeron 600 - $90
The lone strong hold for Intel in our value system recommendations is here in the Value SOHO machine. And the only reason Intel gets the nod here, where CPU performance is not that critical in fact, is the ability to use the highly integrated and inexpensive i810 chipset. Celeron makes the perfect choice for our value SOHO machine– it’s cheap, but you still get a relatively fast processor for the applications this machine will be used for.  This month, prices have dropped to the point where an FC-PGA Celeron is a reasonable option and the 600 MHz model makes the most sense since it's only a few bucks more than a 533 or 566. For overclockers, consider looking for a 533A or 566 since these CPU's seem to hit 800 and 850 MHz, respectively, with minimal effort. 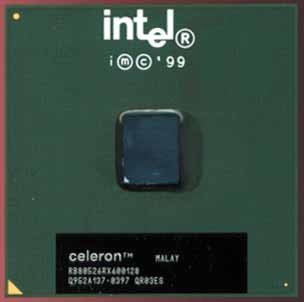 For more information on all Celeron processors, read our Celeron 700 Review.

As long as gaming performance isn’t involved, the i810 offers more than sufficient power for a basic home or office system.  Boards with the i810E currently cost about $50 more than comparable i810 boards, and we don’t need the 133 MHz FSB speed for our 66 MHz FSB Celeron anyway.

Since this will be a work machine, quite possibly the most important factor in a motherboard is stability, and the AOpen MX3W was one of the most stable i810 boards we’ve tested.  It’s easy to find and costs under $90, making it a good choice for our system.  It is, however, a microATX board, so if you need a lot of expansion, look for something in a full ATX form factor.

For a bit more, you can go with an i440BX based motherboard. However, you'll then have to pay for a video card as well. This route will give you better performance and better expandability, but at a greater price.

SDRAM prices are on the way up but at the same time you don't want to sacrifice quality since often times cheap generic SDRAM is the cause of a flaky system.

While we can't point you in the direction of our usual recommendation of 128MB Corsair PC133 SDRAM due to cost, Mushkin's Budget PC133 SDRAM which we included in our latest PC133 SDRAM Roundup actually makes use of NANYA SDRAM chips which happened to work fairly well as you can see from our roundup.

Note that the i810 chipset alwasy runs the memory bus at 100 MHz, regardless of the FSB speed of the CPU. That means that PC100 or faster memory is required. While you can save a few bucks by going with PC100 instead of PC133, the price difference is minimal and PC133 will come in handy if you ever upgrade the motherboard.