A Closer Look at the ASUS UX31A

Besides the hardware, let’s quickly cover the build quality and keyboard/touchpad aspects before moving into the benchmarks. If you’re not a fan of the Ultrabook aesthetic, ASUS isn’t likely to change your mind with the UX31A. It’s really thin and sleek, and ASUS includes a sleeve roughly the size of a manila envelope that you can use to carry the UX31A around, but there are a lot of other thin and sleek laptops. The chassis and casing on the UX31A are predominantly brushed aluminum, lending the laptop a distinctly premium feel that’s sometimes lacking in competitors. The chassis is also fairly rigid—if you put enough force into it, I’m sure you could bend and/or warp the chassis, but you’d have to really make an effort (or accidentally drive over or drop the laptop) before that’s likely to happen. The LCD bezel is a matte black plastic and so are the keys of the keyboard, but just about everything else is brushed aluminum.

Speaking of the keyboard, one of the serious concerns I’ve had with most Ultrabooks is the key travel. I can live with it in a pinch, but on many of the Ultrabooks typing feels extremely fatiguing. I had the same concern with the previous generation UX31E, but I’m happy to report that while the UX31A looks very similar, there are slight changes to the keyboard that make it feel substantially better. As I always try to do with reviews, I’m typing this up on the UX31A and finding it to be fine as far as 13.3” laptop keyboard go. You also get keyboard backlighting now (a must for any modern laptop costing over $800 in my book, really) and a reasonable layout—reasonable but not ideal. It’s the same as the layout used on many other laptops, with document navigation keys relegated to Fn+Cursor combinations. That’s the first layout complaint I have, and there appears to be plenty of room for ASUS to have used their older layout where Home/End/PgUp/PgDn are in a column on the right of the keyboard, but at this point I’ve encountered this same layout so many times that I’m starting to get used to it.

The other layout “innovation” that I don’t like is the continued use of a power button key where the Delete key belongs. Thankfully the key has to be held in for a couple seconds before it activates, and even then the default behavior is to pop up a menu asking if you want to Sleep, Hibernate, Shut Down, or Do Nothing (see above). That means you won’t accidentally tell the laptop to shut down when you’re reaching for the Delete key, but I still don’t know why this is any better than a power button separate from the keyboard. Certainly I don’t find either aspect of the keyboard to be a big enough deal that I can’t live quite happily with the UX31A, and perhaps some users even prefer this style of layout; YMMV.

Audio quality on the UX31A is decent considering the size of the laptop. The speakers don’t get incredibly loud, and they don’t offer much in the way of bass response, but the listening experience is reasonable. My experience is that most people are going to use headphones on a laptop if they want decent audio quality—and it’s not like you’re going to watch a movie on an airplane without headphones regardless—so overall the speakers are fine. ASUS did provide an updated Realtek driver that seemed to improve the audio quality slightly as well; you’re not going to get something equal to a larger laptop with a dedicated subwoofer, and even some other Ultrabooks probably offer slightly better speakers, but unless you’re a serious stickler for laptop speaker quality there’s not much to worry about. 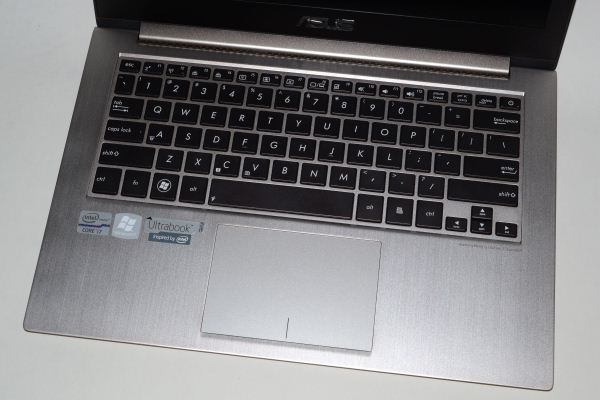 I’ve saved the touchpad for last, and unfortunately it’s the weakest link in an otherwise remarkably potent ­­­chain. ASUS uses Elantech hardware with their own custom drivers, and throughout the course of this review I’ve gone from despising the touchpad to finding it okay if unexceptional. It’s not going to win an award for being the best clickable touchpad around, but where earlier drivers/BIOS versions caused the touchpad to have an extremely laggy and imprecise feel, with the later 1.0.27 drivers and 206 BIOS things are generally fine. I have still had inadvertent mouse activations just in the process of typing the first couple pages of this review, though, and the ASUS SmartGesture drivers don’t have any settings for palm checking. If you really have issues with the touchpad activating while typing, there’s a simple solution: turn off the touchpad (temporarily) using the Fn+F9 shortcut; I’ve done that for the past few paragraphs and find that I’m quite happy skipping the touchpad for long periods of time.

That’s not to say that the touchpad is something that can’t be fixed, though; just in the past month ASUS has released six (possibly more) touchpad driver updates. Up until around two weeks ago, the drivers were pretty bad, and the “latest” 1.0.26 are still problematic. To get the latest drivers, you’ll likely need to search the ASUS download site for “touchpad” rather than going through the UX31A page—you can find 1.0.29 at the time of writing, and ASUS recently gave us a preview version of 1.0.32 for testing; I just installed those so perhaps they’ll fix the issues I’ve had up until now. Whether or not the latest drivers fix the problem, provided ASUS keeps updating the drivers they ought to be able to get things right eventually. While I’ve also heard that installing the “stock Elantech” drivers can help, Elantech doesn’t actually make reference drivers that you can easily download, and all of the links I’ve found online are for older versions from, you guessed it: ASUS. For now I recommend sticking with the latest available drivers and updating when/if a new version is released. Make sure you update the BIOS as well, as apparently that also has an impact on the touchpad.

Update: One of our readers was kind enough to provide the link to where you can find ASUS' own stock Elantech touchpad drivers. I went ahead and downloaded the obscenely large driver package (maybe it supports every variant of Elantech touchpads ever made?) and I'm typing this using the "stock" drivers. There's now a setting to help the touchpad reject input while typing, although I'm not sure it actually works all that well as I can still see the mouse cursor moving around as I type this. I've also noticed that a few other aspects of the touchpad, like coasting after scrolling with a two-finger swipe, don't seem to be as smooth as with the ASUS SmartTouch drivers. I'm not sure which drivers are actually best overall, but I still feel like Synaptics' touchpads and drivers are better than Elantech. If you're not happy with the SmartTouch drivers, though, give the other drivers a shot.

Addendum: Just a quick final update on that topic before we hit the benchmarks: with the 1.0.29 drivers as well as the 1.0.32 pre-release drivers, I have still had periodic inadvertent activations of the touchpad while typing. So far, most of the 1.0.27 and later drivers feel about the same to me. At some point we might get drivers that get the touchpad to the point where I’d have no complaints, but while it’s my biggest gripe with the UX31A, it’s also a relatively minor complaint in the grand scheme of things. Earlier reviews done with the initial drivers should probably be ignored at this point, as the driver updates have dramatically changed the overall feel of the touchpad during the past month. As for typing, turning off the touchpad via the shortcut is quick and easy, and even with it on I only get about one inadvertent activation for every 500 or so words typed. I can live with it, and that’s from someone that routinely types out 5000+ word documents. This whole review is being written on the UX31A just to prove to myself that it’s not a major concern. YMMV, naturally, but at worst the touchpad is still generally better than everything other than the latest Synaptics touchpads. 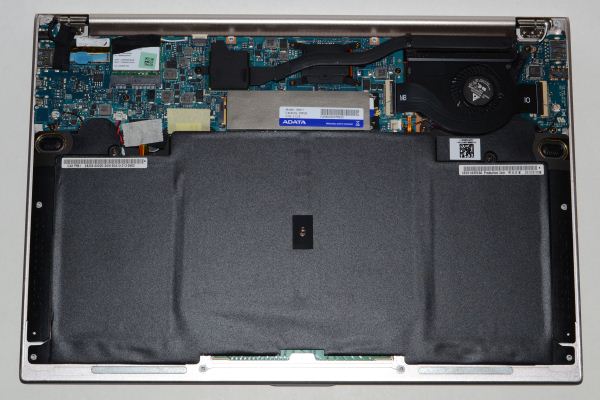 One thing that’s nice is that for users wanting to access the internals on the UX31A, it’s relatively simple to open up the chassis. All you need is a T-5 Torx screwdriver and the patience to remove ten screws. It’s extremely easy compared to some other Ultrabooks. The only problem: there’s really not much to do inside the laptop. The only components you might conceivably replace are the SSD and the WiFi card. I’ve heard complaints about range on the WiFi card, but again ASUS informed me that they worked to improve that with a BIOS update; I didn’t find range to be any worse than other laptops (though likewise it’s no better). As for the SSD, you can see the ADATA XM11 unit in the above photo, and it has the same proprietary connector that the previous generation UX21E/UX31E Zenbooks used. I haven’t found anyone selling such a drive online yet, but perhaps they’ll start to show up in the future.

Besides the hardware, it’s also worth discussing the software side of the equation. Let me get this out there: I hate all the McAfee, AVG, Norton, etc. “Internet Security Suite” packages that get installed on laptops. I know exactly why they’re there: if ASUS gets paid just $1 for such a package, their actual profits for a laptop are probably in the low double digits (with the retailers making much higher profits), so the difference between $15 profit and $16 profit is certainly significant. It’s annoying to the end user, and frankly it’s the first thing to go when I get ready to test a new laptop. The UX31A has several software packages you’ll want to remove if you’re like me, but 20 or 30 minutes (at most) should leave you with a lean running machine. Once the extraneous software was removed, boot times on the UX31A are a very reasonable 18 seconds, with 4-5 seconds spent in the POST (Power On Self Test) sequence. I’ve seen a few laptops boot faster, but most of the difference is in the POST time and I’m not going to complain too much about sub-20 second boot times. Heck, it takes roughly the same amount of time to resume from hibernate based on my testing, though recovering from sleep mode is nearly instantaneous.

So that’s the introduction to the ASUS UX31A: it’s got a great Ultrabook design, with one of the best LCDs you’ll find outside of professional mobile workstations. The keyboard is also the best I’ve laid hands on in the Ultrabook realm. The only fly in the ointment is a touchpad that so far has been a bit less than perfect. That’s unfortunate, because other than the price and the Ultrabook feature set, that would be the only thing holding the UX31A back.