In the first article, we attempted to illustrate that, contrary to popular belief, RDRAM wasn't getting hot enough to warrant active cooling measures in order to maintain stable operation.

The point behind the heat spreader that rests on top of the RDRAM chips themselves is to help distribute the heat, which is generated by the single active RDRAM device on the module, more evenly.  A single active RDRAM device (chip) generates more heat than a single active SDRAM device (chip); the only difference between the two is that, on an SDRAM module, all devices can be active at once whereas on a RDRAM module only one device can be active at once.  All of the other devices on an RDRAM module draw no more than 250mW of power (compared to 900mW for a device on an SDRAM module), so the only one that really requires attention is the active device, which is drawing upwards of 1.1W of power.

Still not convinced?  We measured the temperature of a PC800 RDRAM module and compared it to that of a PC133 SDRAM module using an external thermistor mounted in the following fashion: 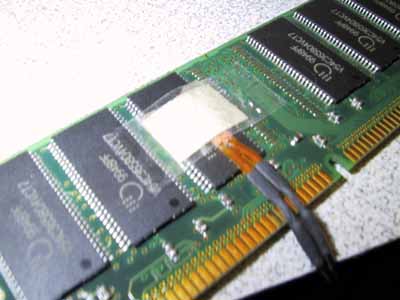 Since all of the chips on an SDRAM module are drawing the same power, the same amount of heat is produced from each one of the chips, and we simply chose one chip to mount the thermistor on that was on the opposite side of where the CPU fan resided, thus eliminating any external cooling factors from affecting the test. 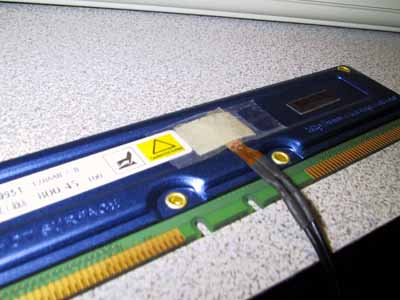 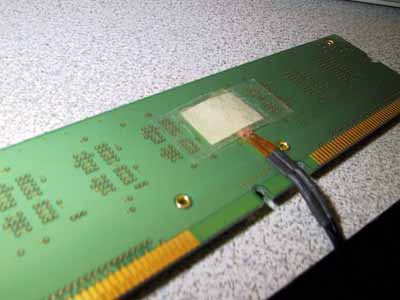 As you can tell by the heat comparison, the PC800 RDRAM came up as being only 3°C warmer than PC133 SDRAM; while that is a definite increase in temperature, it isn't great enough to warrant any sort of active cooling.

For comparison's sake, we've included the temperatures of two video cards that don't use a fan and are used by quite a few users:

So while the 37°C temperature of the RDRAM is greater than the 34°C we measured on the PC133 SDRAM, it isn't high enough to require a fan and is definitely less than the 66°C that a fan-less Voodoo3 3500TV weighed in at.