Tapping the top of the screen brings up the device’s menu, where you can search through the book’s contents, change the font size, and configure other options. Standard pinch-to-zoom controls are also available, which will change the font size on the device. Tapping and holding items on the home screen will bring up additional information about them, and tapping and holding text in a book will allow you to highlight and share text and make notes.

The touch keyboard, invoked whenever the device needs text input, should be familiar to anyone who has used a smartphone or tablet. It’s a standard QWERTY layout, with options to switch to a couple different keyboards for numbers and symbols. Because of the Kindle’s 6” screen, typing an entire novel on the keyboard is never going to be an option, but it’s miles ahead of the onscreen keyboard in the Kindle 4, and it’s quicker and more accurate than the screen’s low refresh rate makes it seem. Whether you prefer it to the physical keyboard in past Kindles is a matter of personal taste (I do), but either way the loss of the physical keyboard is made up for by the reduction in size and weight. 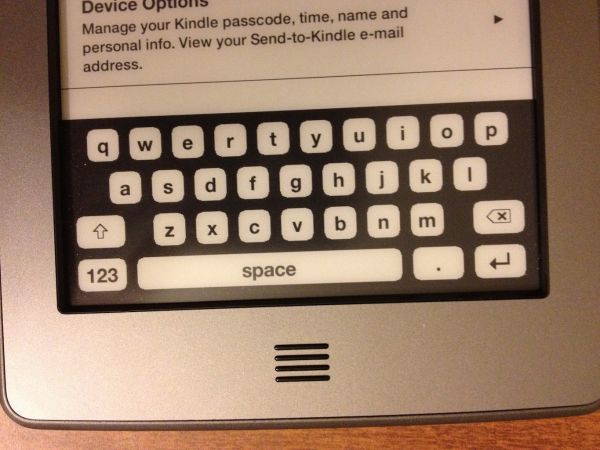 The touch controls work well and respond quickly enough to user input, though of course the E-Ink screen isn’t as responsive as the capacitive touchscreens you’re probably used to. For reading, my opinion is that touch controls are not objectively better (or worse) than the physical buttons on the Kindle 4, though they’re certainly more convenient for selecting items from menus and purchasing books. Accidental page turns will happen on occasion, and while carrying the Touch from room to room you may want to either put it to sleep or avoid touching the screen (the biggest behavioral tweak I had to make in coming from the Kindle 4) but in general the reading experience is excellent and easy to recommend. If you do any note taking or highlighting (or any other task that requires text input), you’ll definitely prefer touch controls for those actions to the innumerable button taps it takes to accomplish the same task on the Kindle 4.

The Kindle Touch’s improvements over the Kindle 4 mostly relate to the touchscreen, but it also has support for MP3 files and Audible-format (.AA and .AAX) audiobooks. 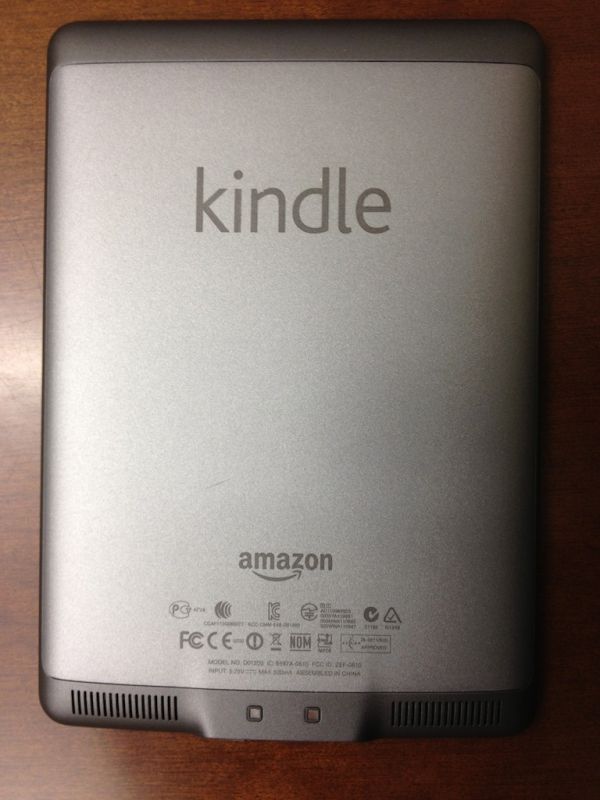 In addition to its headphone jack, the Kindle has speakers on the back for listening to audio - the quality isn’t fantastic and they don’t get very loud, but they’re adequate for audiobooks in a relatively quiet room and there’s no distortion when the sound is turned all the way up.

The audiobook player itself is simple but functional: the play/pause button and volume bar are at the bottom of the screen, below the progress bar. There are controls for moving forward and backward in the track, switching between tracks, and jumping back to a previous position in the track. While playing audiobooks, you can’t use the Kindle to do anything else - navigating away from the player page will stop the track.

The MP3 player, accessed through the Experimental menu, offers fewer controls - you can only navigate between tracks, control the volume, and turn playback on and off. Unlike the audiobook player, though, you can freely read other books, browse the Kindle store, or hop on the Internet while music tracks are playing. As with loading PDFs or other non-Amazon files to the Kindle, there’s no pretty interface for loading MP3s onto the reader - you plug the Kindle into your computer and drag MP3s to the Music folder in your file explorer.

The Kindle obviously isn’t meant to be a dedicated music player, but lack of support for Amazon’s Cloud Player or its MP3 store seems like a missed opportunity. Battery life is probably better without this functionality, but it’d be a nice option for people who listen to music while they read.

At the end of my Kindle 4 review, I said that the low-end Kindle “isn’t necessarily designed to be anyone’s first Kindle or anyone’s only Kindle” and was aimed primarily at people who already own another tablet or Kindle. I still think that the Kindle 4 is a great second e-reader for someone who already has one, but if all you’re doing on your Kindle is reading (and I’m sure that describes a lot of you) then I’m going to adjust my previous opinion slightly - save yourself the $20, because the Kindle 4 is a pretty good gadget at an impulse-buy price.

However, if you do any highlighting or note taking, if you wouldn’t mind audiobook or MP3 support, if the added battery life or extra storage space appeals to you, if the thought of clicking around the device’s menus or the Kindle store with nothing but buttons sounds irritating, or even if you’ve learned and gotten used to a touch interface on a smartphone or tablet, the Kindle Touch is the Kindle to beat. You really get a lot for that extra $20, and in my mind the touch keyboard is worth that much by itself. Whether the 3G option is worth the extra $50 is up to you - given the ubiquity of wi-fi and the new limits on Internet usage over 3G, I think the 3G Kindle is more of a niche product than ever before, but you world travelers probably already know if it’s a feature you can’t do without.