Rumor had it that in order to save time (and likely cost) in bringing the Fire to market, Amazon had opted to use the same design as the BlackBerry PlayBook courtesy of the ODM that made both: Quanta.

ODMs like Quanta will build anything you want or they'll do slight modifications to an existing design to suit your needs. The idea is you don't need to be an expert at everything. If your differentiation is primarily software and you just need a fast hardware platform, Quanta (or Pegasus or Foxconn, etc...) will give you that and let you roll your own software stack on top of it. It's not all that uncommon in the industry. This is actually how companies like Marvell work in the SSD space as well. They'll give you the hardware, but the most successful drive makers simply use the Marvell hardware as a base platform - they all write their own firmware.

Aesthetically, the Kindle Fire looks a lot like the PlayBook. The dimensions, screen size/resolution and even build quality are eerily reminiscent of one another although the PlayBook is tangibly larger. Both tablets have a large screen bezel (the PB's is bigger) and soft touch plastic on the back. The power/lock button on the Kindle Fire is also quite similar to what's used on the PlayBook. It's in a different location and is much easier to actuate but it's clear that even the buttons came from a similar parts bin. 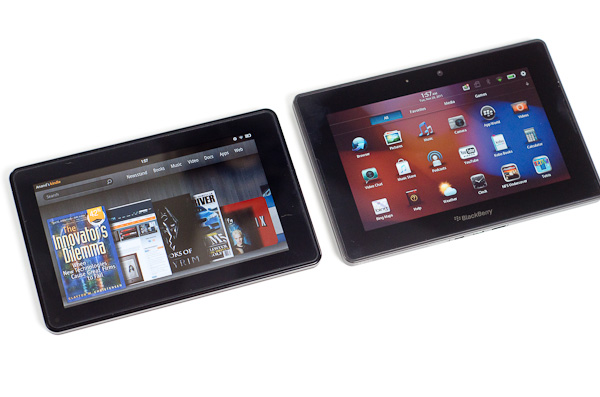 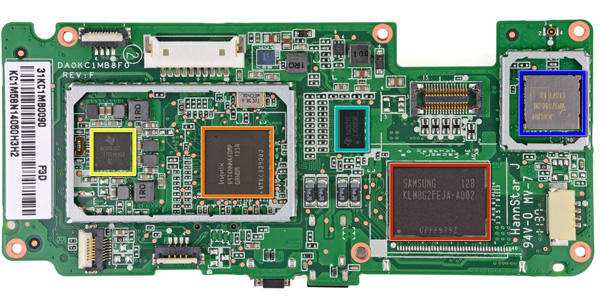 Either way it's clear Amazon departed from its usual unique design approach with the Kindle Fire. While previous Kindles were fairly recognizable among a sea of devices, the Kindle Fire looks and feels like a PlayBook. In fact, when it's off and sitting on your desk, you'd be hard pressed to tell that it was something made by Amazon. The large 'kindle' lettering on the back was likely designed to address this brand identity issue, but it really was the only thing Amazon could have done given the generic looking platform.

Looks aren't a major concern of mine but I do wonder what we can conclude from this. Either the Kindle Fire was a rushed project to catch the 2011 holiday shopping season or it's a sign that value tablets can't look very special, or perhaps both?

Despite the physical similarities to the PlayBook, Amazon whittled down the number of buttons on the Kindle Fire to just one: power/lock. Volume controls are entirely in software, and to be honest I don't miss the physical buttons. As this isn't a smartphone, I don't need to worry about quickly silencing a ring or increasing the volume of a call. The tradeoff here makes sense.

As I mentioned before, the round power/lock button is easy to actuate. The bigger problem is the button's location: at the bottom of the Kindle Fire. On the bright side it does keep the button out of your way when you're reading, it just happens to be in the exact opposite location of where years of using modern smartphones/tablets have taught us to expect it. Then again, an oddly placed power/lock button isn't too big of a deal when you've got a configurable software screen lock.

A 1/8-inch headphone jack and micro USB port keep the power/lock button company. Amazon doesn't ship the fire with a micro USB cable, instead you just get a power brick with a micro USB end for charging the Fire. To Amazon's credit, to use the Fire as a Kindle you never need to hook it up to your Mac or PC. A standard USB cable is only really needed for getting your own music, videos or apps onto the device.

There are a pair of stereo speakers on the opposite end of the device. The volume control feels non-linear and the speakers get loud enough to make their position a bit awkward. Hearing loud noises from one side of the device and not the other isn't really desirable, particularly since you'll likely be watching movies on the Kindle Fire in landscape mode.