Corsair Carbide 500R: A Corsair in Every Home

In and Around the Corsair Carbide 500R

If Corsair's white special edition Graphite 600T and the Carbide 400R got a little too drunk one night in the factory and engaged in some improprieties, their offspring might look an awful lot like the 500R. The trends of companies a bit newer to the enclosure market like BitFenix, Fractal Design, and Corsair towards producing reasonably understated, stylish designs can't be appreciated enough. However you may feel about how the Carbide 500R looks, you're probably at least a little thankful it's an aesthetic that doesn't scream "GAMERZ!!!one!" 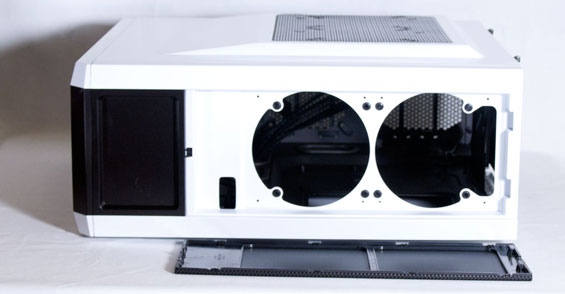 Corsair opts for black plastic accents in the form of a "stripe" that runs along the front and top to the back of the enclosure while using white-painted steel for the side panels and some of the internal framework (specifically the top fan mounts). The grilles on the front and the mesh bay shields allow for plenty of air to come in through the front, and Corsair wisely places the reasonably modern I/O and controls near the top. This is a trend I'm happy to see continuing and spreading. Finally, the top of the case has a removable mesh that reveals two 120mm fan mounts that can be used for a 240mm watercooling radiator. I took NZXT to task for this in their Phantom and I'm going to do it again here: having these mounts openly cut out like this is bad for noise if you're not using watercooling. No amount of fan control can make up for a case with poor sound dampening qualities. 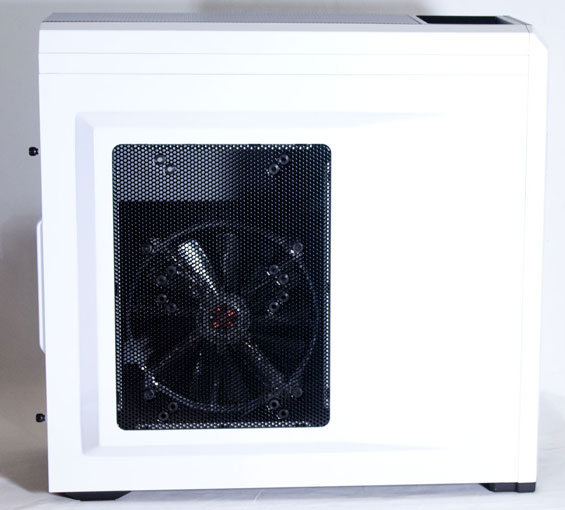 Chances are, if you're looking at the side panels, though, you weren't expecting the quietest case anyhow. The Carbide 500R sports a large mesh on the left side capable of supporting either the included 200mm intake fan or a pair of 120mm/140mm fans. I'm personally a big fan of these side intakes in cases, although more exotic designs like SilverStone's much more expensive FT02 can usually happily eschew them while providing stellar cooling and acoustic performance. I'm not sure how I feel about the flexibility of the fan mounts here, though; the included 200mm leaves a lot of open, "dead" ventilation. This is probably one area where your mileage may vary. 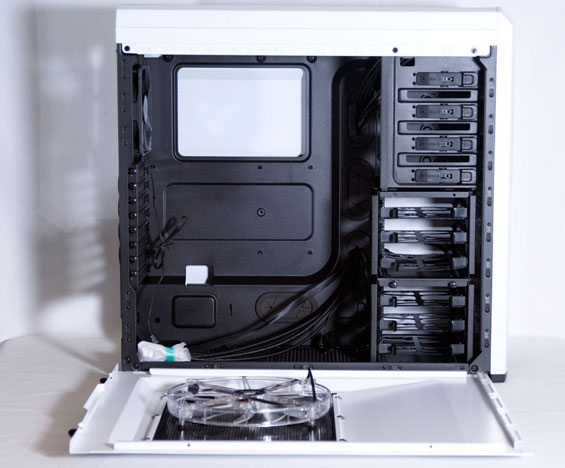 Of course, once you unscrew the side panels (with handy thumbscrews that are affixed to the panel itself so you never lose them) you'll find yourself firmly entrenched in the one place where Corsair's engineers are the absolute masters of their domain: the internal design. The guts of the 500R are, just like its siblings, a masterpiece of convenience. Motherboard standoffs are already mounted in the tray, the grommets that line the cutouts around the tray are firmly affixed, and Corsair's tool-less mounts for optical drives remain among the best in the business.

If there's one place where Corsair dropped the ball a bit, it's the drive cages and drive sleds. The sleds are the same ones from the Carbide 400R and they're a bit of an improvement on the old ones, but still feel a bit flimsy. For most use they'll probably be alright, but I do long for the metal sleds Fractal Design opts to employ in their enclosures. As for the cages, while it's awesome that you can actually remove both of them, they both require at least four thumbscrews to be removed, with the second's thumbscrews mounted under the bottom of the case. This is a far cry from the 600T, whose drive cages required half as many. It's a minor complaint, but still at least a little irritating.

Finally, while space behind the motherboard tray seems narrow, looks can be deceiving. However you feel about the bowed side panels, the rear one does provide a substantial amount of space to stash cabling. It's not the most elegant solution in the world and I still found Fractal Design's Arc Midi to have a healthier amount of overall room to hide cables, but it's a great start.