BitFenix Merc Alpha: Just How Much Can $39 Buy?

In and Around the BitFenix Merc Alpha

The important thing to remember (and the thing I'm likely to continue beating you about the shoulders with) is that the BitFenix Merc Alpha is just $39, and so expectations should be adjusted accordingly. People expecting four fans, an aluminum fascia, and support for four GTX 580s should obviously be looking elsewhere, but for those of us willing to accept an inexpensive (read: not necessarily "cheap") plastic and steel enclosure that's not too hard on the eyes, there's a lot to like here.

The front fascia, drive bay shields, and I/O at the top of the enclosure (just where I like to see it) are all a black plastic that may have saved BitFenix some dough but certainly doesn't feel particularly cheap, while the rest of the enclosure is made of steel. I found the steel feels a bit thinner than usual, but that's to be expected with a case at this price, and it's not so thin as to really compromise the durability of the Merc Alpha. The case is light, but it's also fairly small for a mid tower. 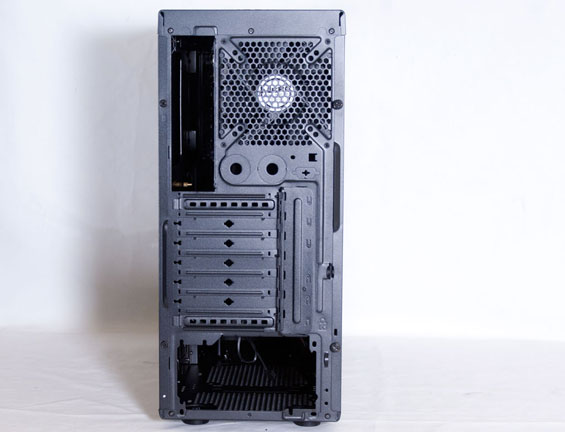 When you check out the back of the Merc Alpha, you'll see that two ventilated expansion slot covers are included while the rest have to be punched out of the case; this is still two more than you usually get in this price bracket. Note that these slots aren't recessed, which unfortunately does lead to one of my biggest pet peeves: the additional metal bracket often required to cover up the back of the enclosure. This invariably requires extra work and I'm not sure how much was really saved by going this route. It does keep the size of the Merc Alpha down, but only a little bit. You'll see the back also supports orienting the power supply normally or inverting it.

BitFenix uses thumbscrews to affix the left side panel to the chassis, and instead of sliding off, the panel is hinged; lift it vertically to remove it. Unfortunately the right side panel is held in place by standard phillips head screws, so this isn't going to be a tool-less assembly. The lack of thumbscrews here is actually odd bordering on anomalous; you'll see later that BitFenix employs thumbscrews at great lengths with this design. 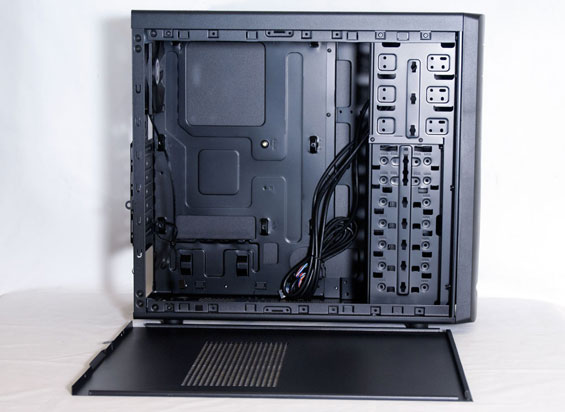 Internally things are pretty basic; hard drive orientation isn't my favorite (I prefer a rotated drive cage), but BitFenix makes good use of the space opened up on the other side of the enclosure. Everything mounts with thumbscrews included with the Merc Alpha (special thumbscrews are included for optical drives and their smaller screw holes.) You'll notice that there's a single copper stud in the middle of the motherboard tray, and that there are raised areas surrounding it: unless you're installing a Micro-ATX or Mini-ITX board, the Merc Alpha doesn't require the addition of any mounts. Directly behind the motherboard tray there's virtually no space, but there's still cable management. In the Merc Alpha, BitFenix has designated the space behind the drive cages for tucking cables.

Honestly the Merc Alpha is pretty basic as far as modern ATX designs go, but it does feel modern at least and includes some niceties that I seldom see even in much more expensive cases.