In and Around the Corsair Carbide 400R

If there's one thing Corsair has done well since launching their enclosure arm, it's been making enclosures that are fairly understated in appearance. The Obsidian series are all just variations on a monolithic black enclosure design, and in fact the Graphite 600T's unusual appearance is frankly the most ostentatious in Corsair's lineup, though it's still fairly understated compared to many other cases on the market. Corsair continues this trend with the Carbide 400R.

To get under the magical $100 mark for the 400R, Corsair went a lot more meat-and-potatoes with this design. The mediocre fan controller from the 600T and up is gone entirely, and the port cluster has been stripped of USB 2.0 ports, so it's now purely USB 3.0. On the one hand I appreciate this forward-thinking design, but on the other it makes booting from USB a bit more difficult. I do think it's a net gain, though, especially now that Corsair has switched from routing USB 3.0 to the back of the case to using a motherboard header. The mesh grilles used on the rest of the front of the case are attractive, too, and bordered on either side by a solid trim. Corsair seems to have heard the complaints of users of the 600T as well: you can toggle the LEDs in the front 120mm fans on and off with an easy switch in the port cluster. 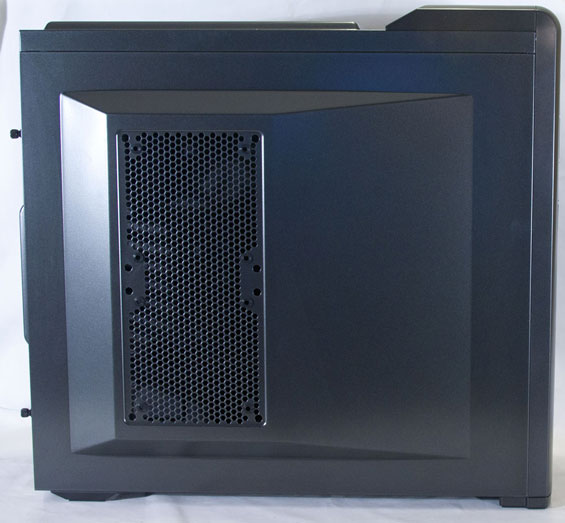 Both of the side panels of the 400R bow outward, with the left panel sporting mounting points for a pair of 120mm or 140mm fans. This actually gave me a perfect opportunity to test a pet theory, which is something you'll see later on. Space behind the motherboard tray is a little bit slight, but Corsair seems to want you to move the cabling into the pocket in the opposite side panel, and that actually did work well. I think if there's anything unseemly about the Carbide 400R's appearance, it's the top lip: the front of the case is raised about an inch higher than the back, although this creates a very easy gripping point. 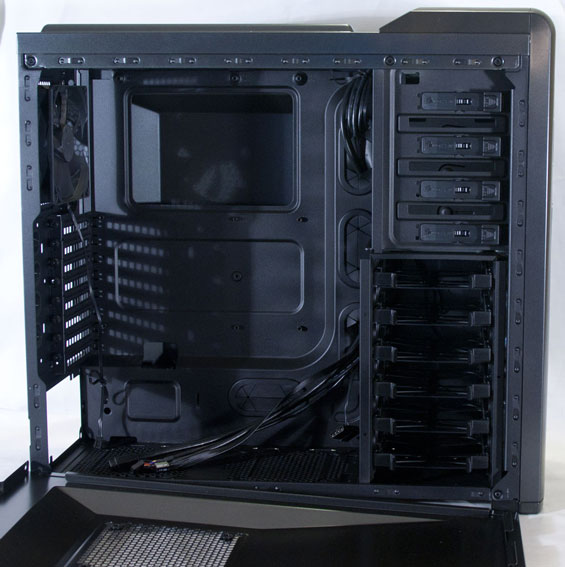 If you kept up with the other two Corsair case reviews, you'll know I'm a huge fan of their interior layout and thankfully very little has changed with the 400R. In fact, once again the interior has even been improved slightly. Corsair keeps the eight expansion slots and rubber grommet-lined mounting holes around the motherboard tray, but loses the awkward power supply mounting system of the 400R's predecessors. The drive cages are also mounted laterally, just the way I like them. I harped on this in my reviews of the NZXT Tempest 410 Elite and BitFenix Shinobi and it bears repeating: lateral drive cages make cabling easier and can substantially reduce potential clearance issues with longer video cards. The six drive trays are even basically the same ones used in the 600T and 650D; the only difference with the 400R is that the drive cages can't be moved anymore. That was a cute feature in the more expensive enclosures, but its omission is a perfectly reasonable corner to cut.

Frankly there's very little I find fault with in the Carbide 400R's design, at least superficially. For a $99 case it has a nicely understated appearance, and the interior looks to make assembly just as easy as it was with the other two Corsair cases. Fantastic.