After Peter, Nokia CEO Stephen Elop took the stage and gave an interesting talk about the future of both Nokia and to discuss their relationship with Qualcomm. Stephen began by acknowledging that just a short time ago, it would have been extremely odd for the Nokia and Qualcomm CEOs to take the stage together - alluding directly to a time when Nokia and Qualcomm were in a heated patent scuffle. With that settled and a commitment to Windows Phone 7 on the horizon, the two have begun a close relationship. 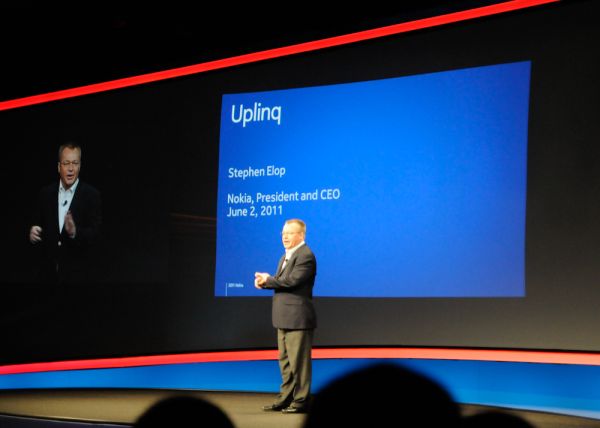 One of the most interesting things out of Stephen's keynote is his perspective on the present state of the mobile industry, and the fundamental shift that has taken place. The competition has changed from a battle between devices that lived in isolation, to a battle between disparate ecosystems. Stephen called out the ecosystem battle between iOS and Android specifically. Stephen claims that Apple's closed ecosystem created vacuum that gave rise to Android. 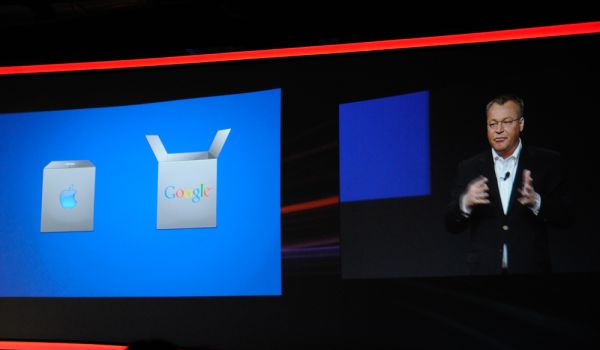 The boxes in the illustration are metaphors for how open each platform is, though he took a not so subtle jab at Google by noting that the flaps on Android's box remain there, and remain open, but the question is for how long. 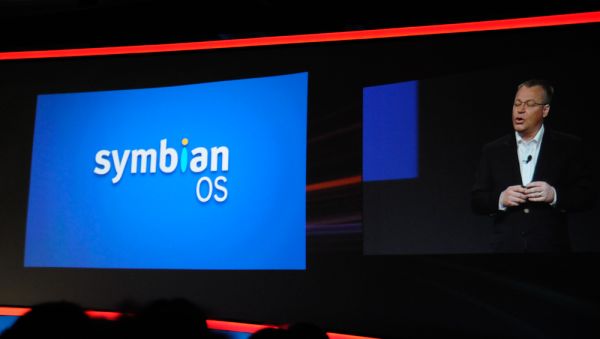 Nokia assessed its current state of affairs in both Symbian and MeeGo. It decided that the Symbian codebase had grown too "fragile and crufty" and posed a significant engineering challenge to fix. According to Stephen, patches and updates to the platform to add features necessary to make it competitive again were taking longer and longer to stabilize, and as a result the decision was made to abandon the platform. The story of Nokia's abandonment of Symbian isn't really one we need to go over, but it's clear that the reasons were both timeline, and the engineering challenge posed by the existing codebase.

The next assessment was MeeGo, which it jointly had worked on with Intel. A similar assessment took place, and Nokia decided that with MeeGo it could not quickly enough create a portfolio of devices and price points fast enough. MeeGo, which forked from Maemo and combined with Intel's Moblin, had a focus on the high end, and enough of a rapid portability to the mass market devices that Nokia sells in volume around the world.

The next critical assessment was Android. Nokia has reiterated a number of times that it felt entering the Android fray was akin to "giving in" and would not offer enough opportunity for differentiation. In addition, Stephen noted that while other companies have focused on multiple smartphone platforms at the same time, for most, Android has become the most dominant. The example Stephen gave is that manufacturers have kept Android hardware competitive constantly with the latest SoCs and cellular basebands, while leaving WP7 a less competitive arena. Moreover, the Android ecosystem is established just as much as Apple's, and jumping into a crowded environment could make it hard for Nokia to distinguish itself.

The obvious next step was to assess Microsoft, in which Nokia found similar scale, and complimentary strengths and weaknesses. Nokia needed software to fix all of its problems, and Microsoft needed class leading hardware to back it. Stephen feels that the two of them together have the opportunity to make a brand new ecosystem focused around Windows Phone 7, and going forward the Windows 8 multiplatform (PC, tablet, smartphone) combination. In addition, they found that Microsoft was willing to let Nokia differentiate and improve WP7 however necessary. It will be interesting to see just how much liberty Microsoft truly affords Nokia.

Stephen then outlined five major principles it needs to nail to build a brand new ecosystem.

The first is that the product must delight consumers. This is something we've identified a number of times in our WP7 device reviews, that Nokia's hardware quality paired with WP7's software experience could make a compelling package. Stephen used the example of the Nokia N8's class leading camera optics, and again compared with the fact that most phone vendors are putting the most engineering talent behind Android phones rather than WP7 devices. 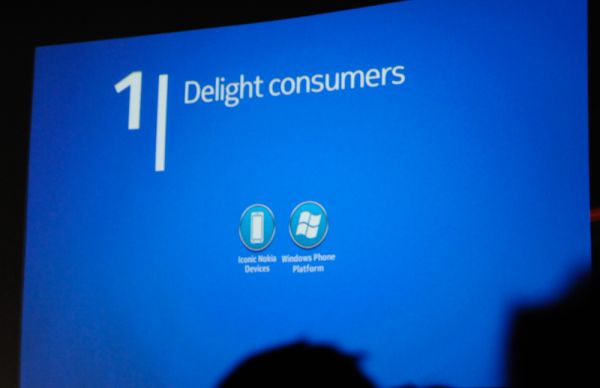 Nokia will focus on and deliver the absolute best WP7 handsets since it will be its only focus, and as a result it feels it can easily differentiate itself from other hardware makers also creating WP7 devices.

Next up is that it must complete the WP7 ecosystem and compete as one against iOS and Android, rather than as a battle of handset versus handset. The goal is to work together with both Microsoft and carriers to flesh out all the required pieces for delivering a complete experience. 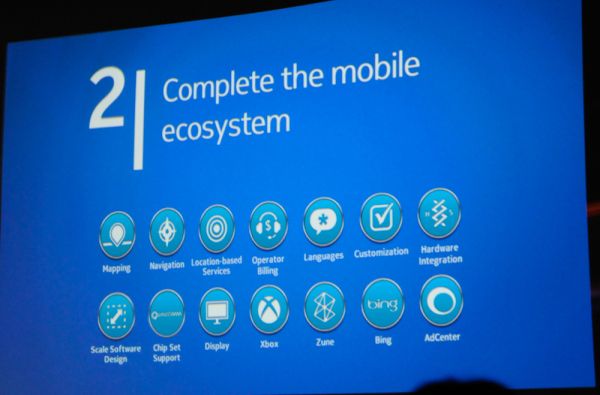 One of the most notable things about this slide is that Qualcomm is called out specifically under chipset support, which possibly puts to rest the rumor that Nokia will be using ST-E SoCs in its WP7 devices. Yesterday Qualcomm chose its words carefully and claimed it was "currently" the exclusive WP7 SoC vendor.

The third principle is to appeal to the operators. In the US and Europe, a very small number of operators have overwhelming control of the mobile landscape, however in Russia, India, and China operators have less of a role, though one that's growing 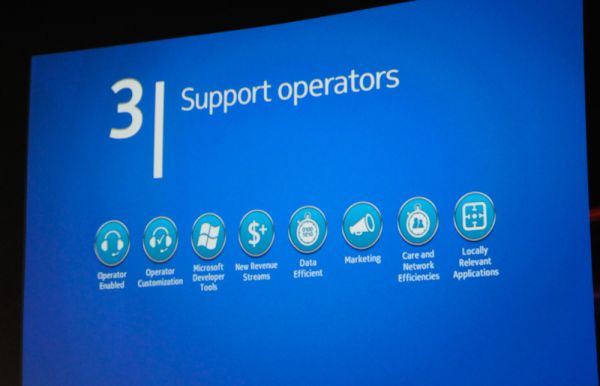 To succeed and see widespread adoption, Nokia must be the most appealing platform from an operator perspective, by offering things like customization, monetization streams through carrier billing, and sound network management.

The fourth is to broaden and expand the ecosystem after fleshing out all the services that need to be in place from step 2. This is about the future, and having a platform that is ready to embrace the future of the mobile revolution. Stephen talked specifically about how the tablet market is in flux, and that Nokia will not enter the tablet market until it can offer something completely different and unique from what's available in iOS and Android. 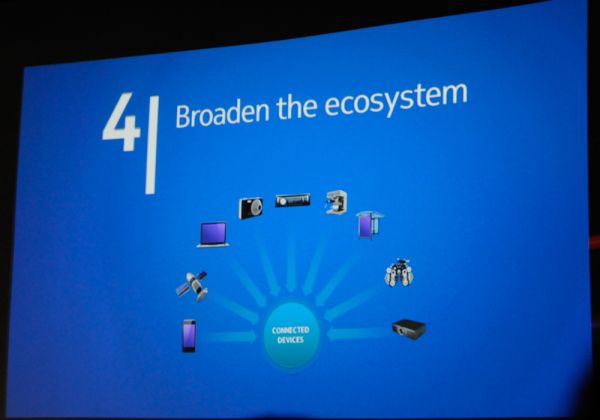 Most notably, he referred to recent announcements about Windows 8 running on both tablets and the desktop as being a way for Nokia to enter the tablet space. A Windows 8 Nokia tablet certainly sounds interesting.

The fifth and final principle is the developer community. I'm not sure why it's last on that list, or whether that means anything, but having developer support is fundamental to a successful platform. Microsoft gets this and has shown it in WP7 by releasing more APIs in Mango, but Nokia wants even more. To succeed, Nokia needs to make WP7 the most compelling environment for application development. Analytics tools, developer tools, no fee developer registration, a single developer portal, and such are all part of the plan. 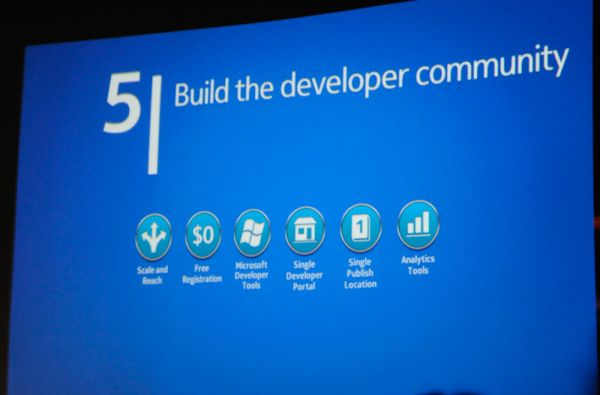 Nokia believes it can disrupt the mobile ecosystem, but to truly do so it must meet all these principles and jointly make WP7 the most attractive platform for customers, developers, and operators. Nokia has its work cut out for it, but it definitely seems like Stephen is ready to hit the ground running.

Stay tuned for more from Uplinq.