I'll admit to being a big fan of small cases. There's usually a lot of innovation and creative engineering that can occur in trying to cram a custom computer into a small enclosure. You'll remember I liked SilverStone's FT03, which had a very clever design and a unique look that may not have been right for everyone but definitely worked for me.

The black and green two-tone of the Moneual Sonamu G100 ties into the enclosure's environmentally friendly message, but it's also reasonably attractive: green is an uncommon color on cases, but that doesn't necessarily mean it's a bad color. Unfortunately, the front face of the G100 uses glossy black plastic that's extremely prone to smudging, made worse by the fact that to get to the USB and audio ports (and card reader), you have to press the panel to make it spring open. That means your fingerprints are always going to be square at the top of the enclosure. I tried wiping my fingerprints off with a microfiber cloth and met with limited success.

As for the rest of the external shell, the side and top panels are decent enough quality steel, painted black. There are two vents in the left panel, but they didn't quite line up with the processor's heatsink or the PCI Express slot. That's probably just as well, because once we get to the back of the G100 we start to learn that there's trouble in Moneual's green paradise.

First, the secret of the design is simple: a power lead from the wall, and to its left a power outlet. The G100 essentially bridges the two connections and has a little bit of hardware inside that allows the tower to control whether or not power goes out to that outlet. It's not really rocket science, and in fact if any of you out there are old enough you're liable to remember the brief period of time when monitors plugged into a computer's power supply instead of the wall. [Jarred: Raises hand.]

This isn't necessarily anything too new; they just added a couple of extra controls to it. When the computer enters sleep mode, you can have the G100 completely cut the power to anything plugged into it. In fact, if you want to save even more power, there's a master power switch on the front next to the USB ports that can completely shut off the power supply. And that's how you get your "standby zero" as Moneual calls it: you just shut everything off. Of course unless you read a review you won't know any of this because the G100's included instructions are staggeringly bare and have no text about what's supposed to be the enclosure's big selling point.

The exhaust cooling is handled by a single 60mm fan (though there's a mount for a second fan), and the expansion slots aren't covered by brackets but have to actually be punched out of the case. That's not a huge issue when you're talking about cases that are under $100, but keep in mind that the Sonamu G100 is selling for $139. Almost as a token gesture, a single replacement bracket is included with the case. Things get a lot worse when you open up the case. 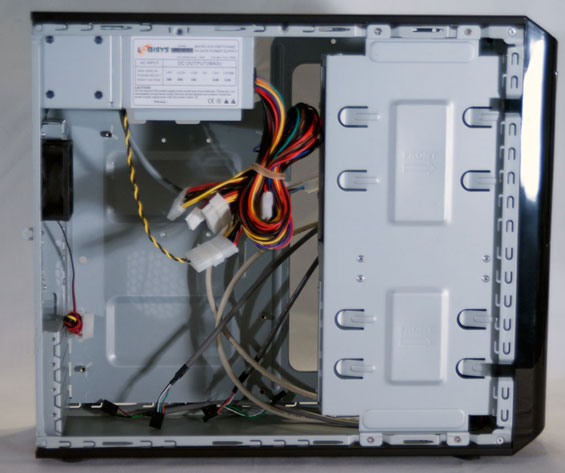 Inside the G100 lies its Achilles' Heel, the Logisys power supply. This is a $20 unit, cheap by any standard, and flies in the face of what Moneual claims to be trying to accomplish with the G100. It's a low-efficiency, generic micro ATX power supply with a grand total of 16 amps on the 12V rail. And it gets so much worse.

We received a review request for the G100 in January of this year, but you wouldn't know it to examine the insides. While the internal layout isn't particularly poor, the removable drive tray doesn't feature any way to mount a 2.5" drive, and that dismal power supply features a grand total of one SATA power connector. All the individual wires are loose, too, being bound more or less by the plugs at the end, with barely so much as a zip-tie to be found among them.

Overally construction quality isn't what I'd consider poor and the case at least feels fairly sturdy, but between the glossy plastic, the horrible power supply, the fact that the 60mm fan doesn't have a pin header and instead uses a standard molex connector, and the lack of a 2.5" drive mount, it's hard not to feel at least a little ripped off when I look at that $139 price tag.