Superscalar to the Rescue

If deepening the pipeline gives us higher clock speeds and more instructions being worked on at a time, but at the expense of lower performance when things aren’t working optimally, what other options do we have for increasing performance?

Instead of going deeper, what about making our chip wider? In our previous example only a single instruction could be active at any given stage in the pipeline - what if we removed that limitation? 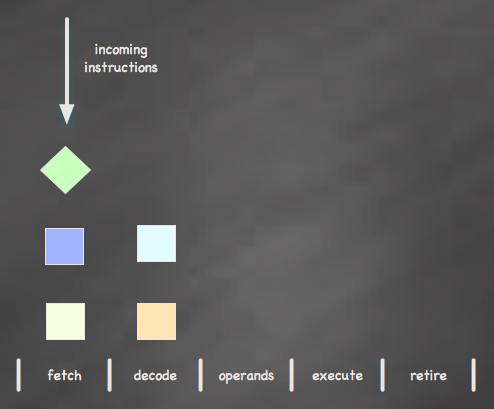 The benefits of a superscalar chip are obvious: you potentially double the number of completed instructions at any given time. Combine that with a reasonably pipelined, high clock speed architecture and you have the makings of a high performance processor.

The drawbacks are also obvious; enabling a multi-issue architecture requires more transistors, which drive up die size (cost) and power (heat). Only recently have superscalar designs made their way into mobile devices thanks to smaller and cooler switching transistors (e.g. 45nm). You also have to worry even more about keeping the CPU fed with instructions, which means larger caches, faster memory buses and clever architectural tricks to extract as much instruction level paralellism as possible. A dual issue chip is a waste if you can’t keep it fed consistently.

The previous two examples of architectural enhancements are major improvements in design. To design a modern day CPU with more pipeline stages or to go from a single to dual-issue design takes a team years to implement; these are not trivial improvements.

A simpler path to improving performance is to just increase the clock speed of the CPU. In the first example I provided, our CPU could only run as fast as the most complex pipeline stage allowed it. In the real world however, there are other limitations to clock speed.

Manufacturing issues alone can severely limit clock speed. Even though an architecture may be capable of running at 1GHz, the transistors used in making the chip may only be yielding well at 600MHz. Power is also a major concern. A transistor usually has a range of switching speeds. Our hypothetical 45nm process may be able to run at 300MHz at 0.9500V or 600MHz at 1.300V; higher frequencies generally mean higher voltage, which results in higher power consumption - a big issue for mobile devices.

The iPhone’s processor is based on a SoC that can operate at up to 600MHz, for power (and battery life) concerns Apple/Samsung limit the CPU core to running at 412MHz. The architecture can clearly handle more, but the balance of power and battery life gate us. In general, increasing clock speed alone isn’t a desirable option to improve performance in a mobile device like a smartphone because your performance per watt doesn’t improve tremendously if at all.

The key take away here is that you can’t just look at clock speed when it comes to processors. We learned this a long time ago in the desktop space, but it seems that it’s getting glossed over in the smartphone market. A 400MHz dual-issue core is going to be a better performer than a 500MHz single-issue core with a deeper pipeline, and the 528MHz processor in the iPod Touch is no where near as fast as the 600MHz processor in the iPhone 3GS.