Our maximum speed testing is performed with both the fans and the pump of the kit powered via a 12V DC source. This input voltage should have the pump and fans matching the speed ratings of the manufacturer – however, the Rise Aurora fans were quite a bit slower than their 2500 RPM specification, spinning at 2420 RPM per our tachometer. Regardless, all three fans were consistent, which is what actually matters as it suggests a good quality control. 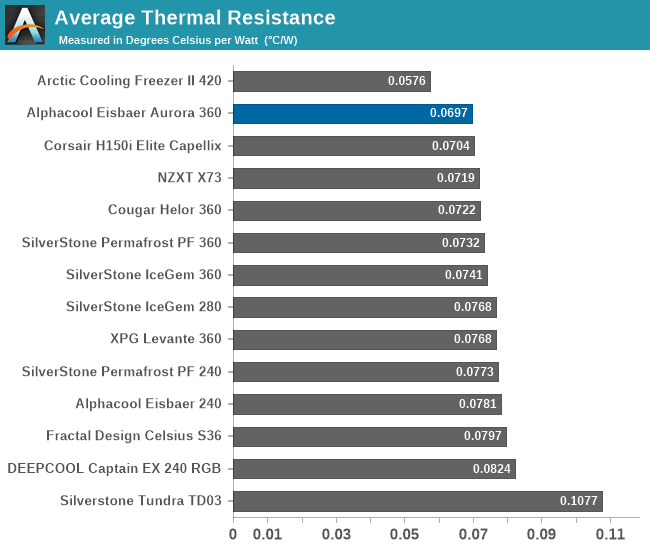 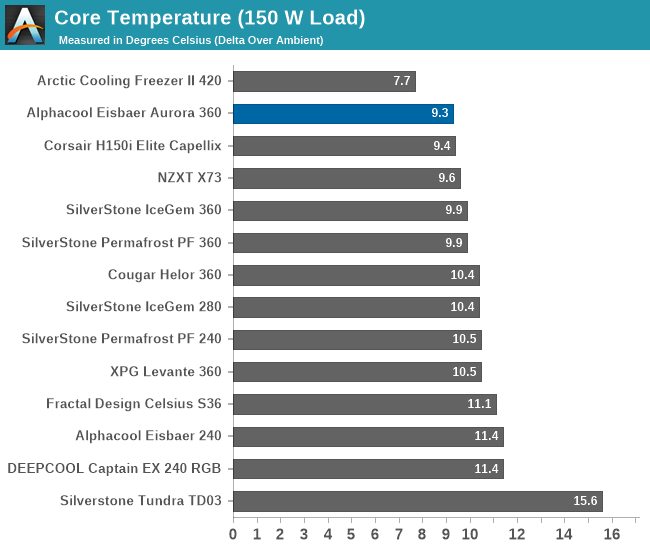 The thermal performance of the Alphacool Eisbaer Aurora 360 indicates that the cooler lands near the top of similar offerings, slightly bested only by the larger Arctic Cooling Freezer II 420. The average thermal resistance of 0.0697 °C/W just a tiny bit better than that of similarly sized and priced coolers, such as the Corsair H150i Elite and the Cougar Helor 360. 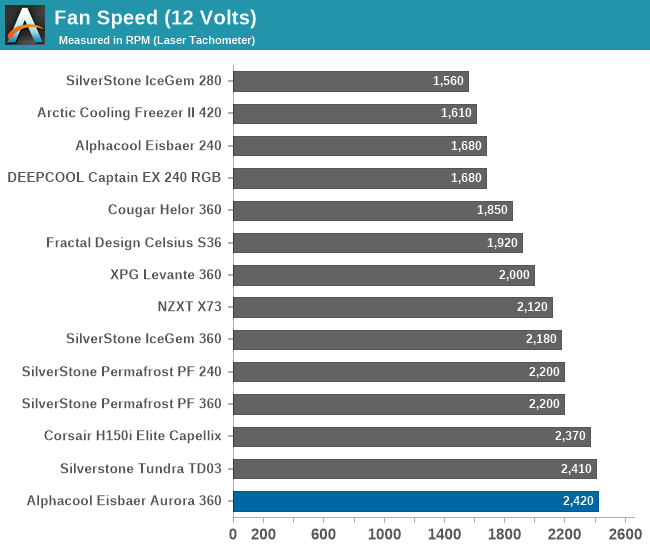 The three Rise Aurora fans that Alphacool supplies with the Eisbaer Aurora are powerful, giving the cooler an advantage on thermal performance but at the cost of acoustics. With all three fans running at their maximum speed, our dB(A) meter recorded 44.3 dB(A), one of the highest figures we have ever recorded while testing an AIO liquid cooler. 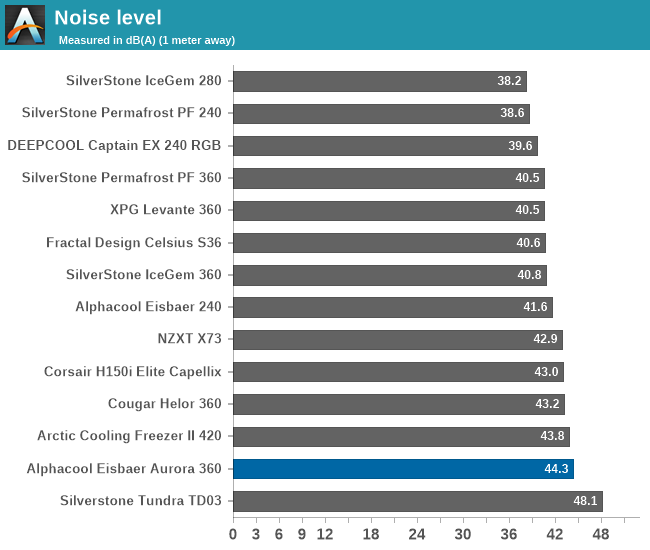 Using a PWM voltage regulator, we reduced the speed of the fans manually down to half their rated speed, which is 1250 RPM for the Rise Aurora 120 mm fans. The pump was also connected to the same power source, functioning properly with this supply voltage. 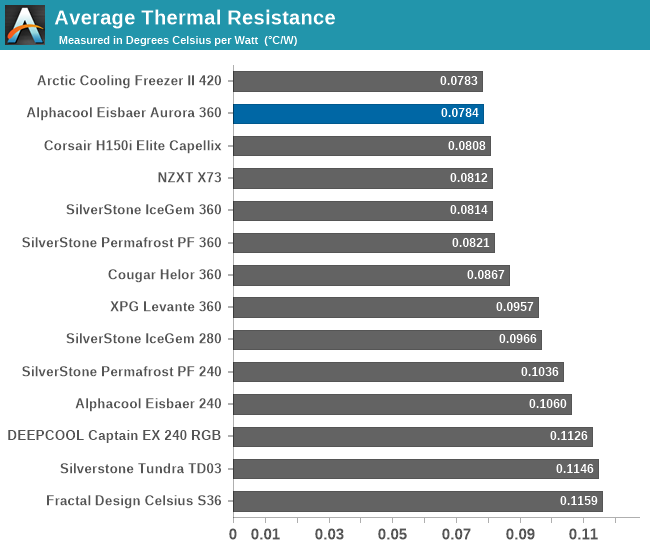 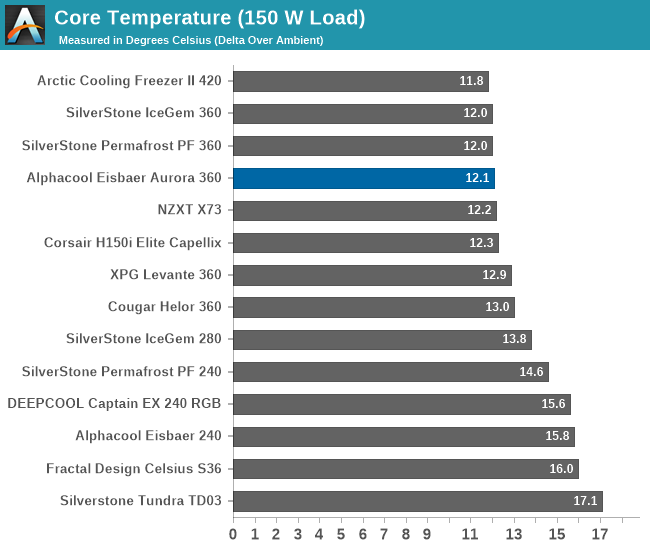 With an average thermal permittance of 0.0784 °C/W, the Alphacool Eisbaer Aurora 360 initially appears to be one of the best AIO liquid coolers that ever went through our labs, matching the performance of the largest AIO cooler, the Arctic Cooling Freezer II 420 and outpacing everything else. This excitement however is short-lived when one remembers that the Rise Aurora fans are quite a bit faster than what most of the competition currently offers. 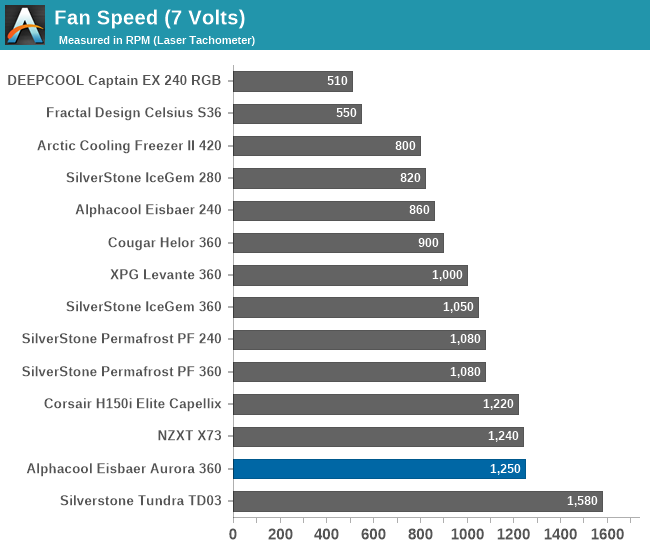 The noise output of the Alphacool Eisbaer Aurora 360 under these operating conditions is 35.9 dB(A), a figure that is clearly audible. It would probably be comfortable for continuous use in many usage scenarios but it is not ideal for environments where the acoustics are vital, as it would create a continuous source of white noise. The pump itself is entirely silent, without any electromechanical noise coming out of it at any speed. 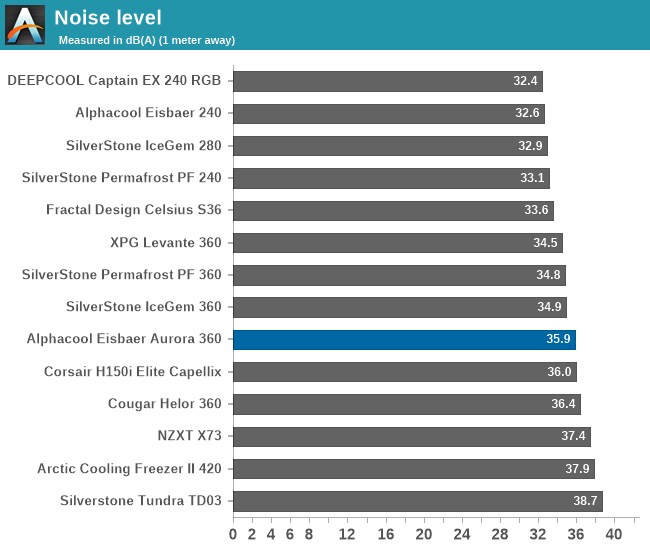 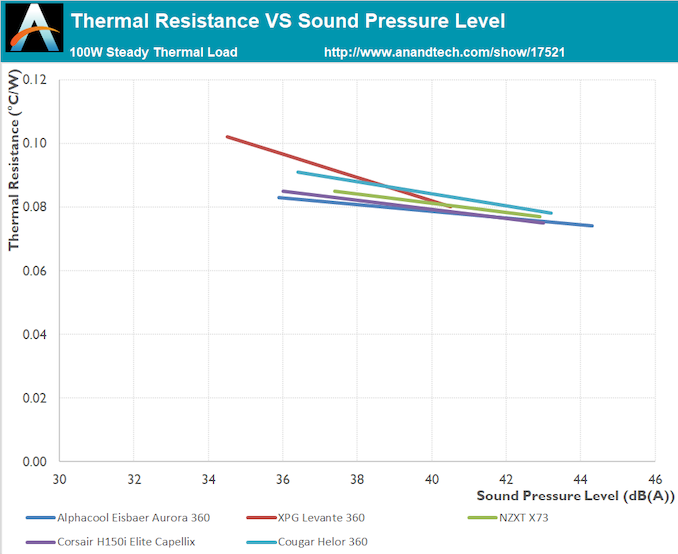 This graph reveals that the Alphacool Eisbaer Aurora 360 does outperform most of the competition, yet by a much smaller margin than our thermal testing originally anticipated. The high noise levels of the fans shift the line upwards, closing the gap of thermal performance per sound pressure level. The Corsair H150i Elite even manages to partially outpace the Eisbaer Aurora 360, offering the same thermal performance at lower noise levels.