The original Surface Book shipped with a relatively meager GPU in the keyboard base, but Microsoft added the Performance Base as a mid-cycle refresh which redefined the Surface Book category. You can still opt for the 13.5-inch model without a GPU, or get it with the GeForce GTX 1650 Max-Q. That’s a big upgrade over the outgoing GTX 1050 in the smaller Book. Meanwhile the bigger 15-inch Book 3 upgrades from the outgoing GTX 1060 to the GTX 1660 Ti. The new Turing-based GPUs don’t offer the ray-tracing hardware found on the RTX series, but are both a big step-up from the outgoing models in all other respects. 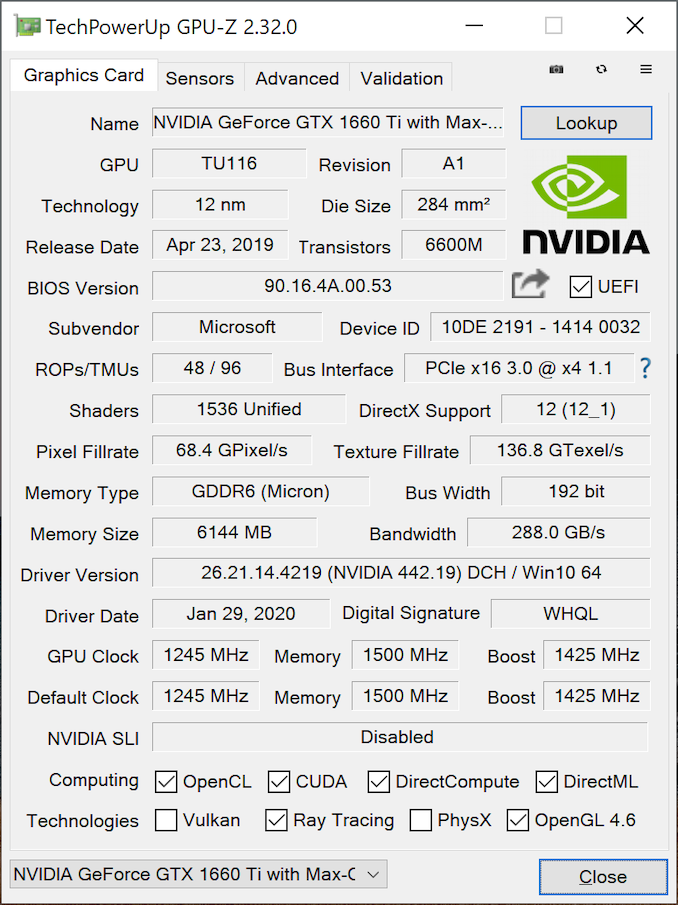 For the first time ever, Microsoft is also offering a Quadro option as well, with the Quadro RTX 3000. This is an even more powerful GPU than the GTX 1660 Ti, so not only should you see better performance, but you get NVIDIA's RT cores as well. From a hardware perspective the Quadro RTX 3000 is functionally equivalent to the GeForce RTX 2060, with 1920 CUDA Cores, so it is a bit of a surprise that Microsoft didn't make a GeForce RTX 2060 an option. That said, on paper the Quadro RTX 3000 is perhaps a bit too powerful for a device like the Surface Book 3 – it's almost certainly running at the lower-end of its TDP range to fit in here – which is a hint that there's more going on. NVIDIA's notebook GPU stack is notably inconsistent between the GeForce and Quadro families, and the company doesn't have a true Quadro equivalent of the GTX 1660 Ti. so from a TDP standpoint, the Quadro RTX 3000 is the next closest thing available.

To see how the new Surface Book 3 fares in GPU tests, we’ve run it through our gaming workloads. We’d love to add some more productivity tests that can leverage the GPU as well, so if you have any feedback please reach out.

As with the CPU tests, most of the notebooks the Surface Book 3 will be compared against will be Ultrabooks with no GPU. Unfortunately, we’ve not had any mid-range gaming laptops recently to see where the GPU stacks up. You can of course compare these results against any other system we have tested using our Online Bench.

We’ll start with some synthetics and then move on to gaming workloads. 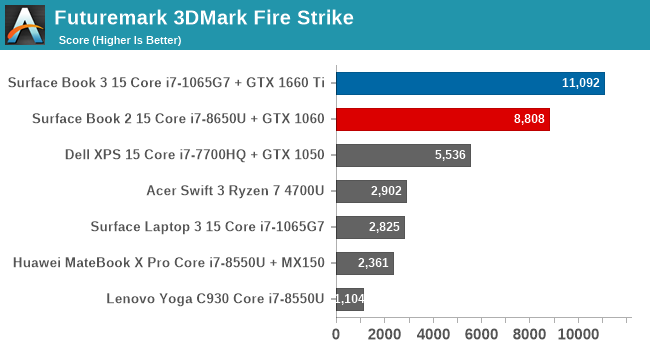 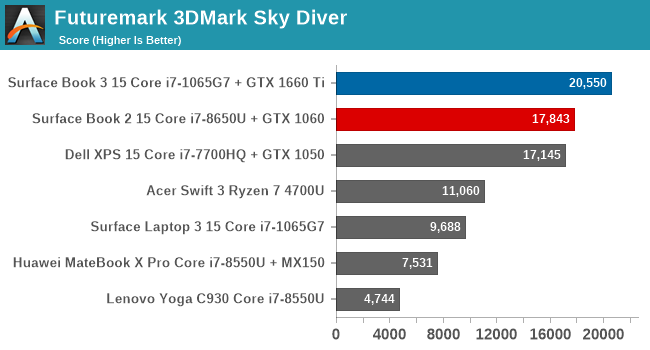 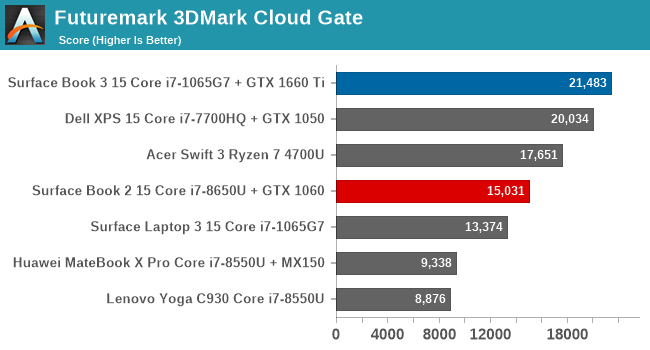 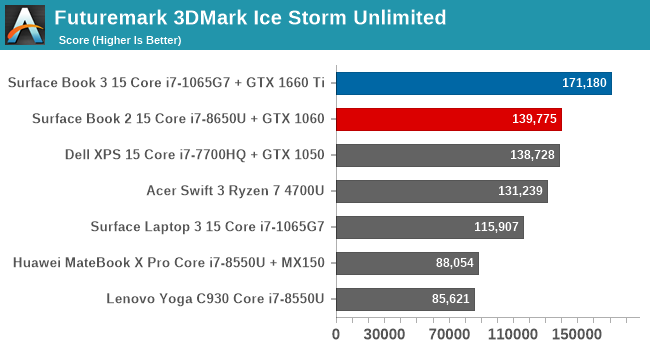 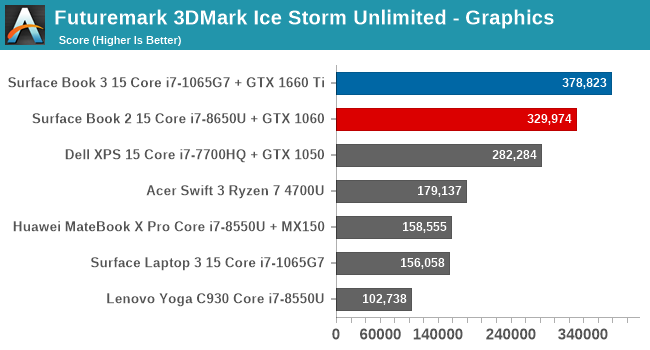 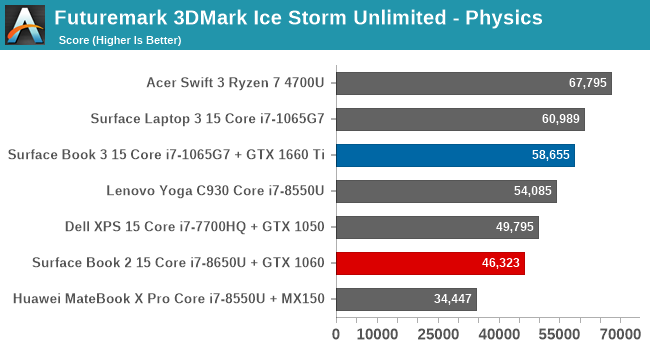 UL’s 3DMark tests a couple of different scenarios, from the very complex Fire Strike down to Ice Storm Unlimited which can be run on smartphones. As the scenes get less complex, the CPU becomes more of a bottleneck. The new CPU and GPU offer a significant increase in performance over the outgoing model. 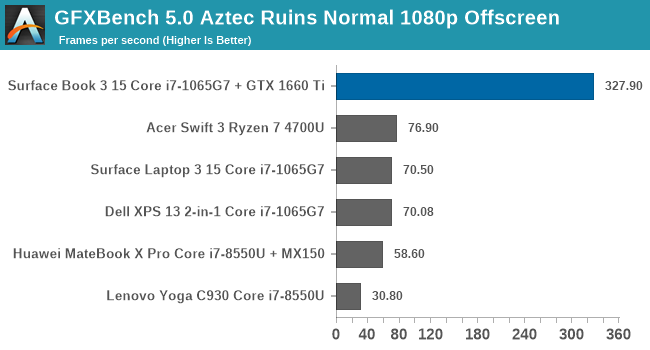 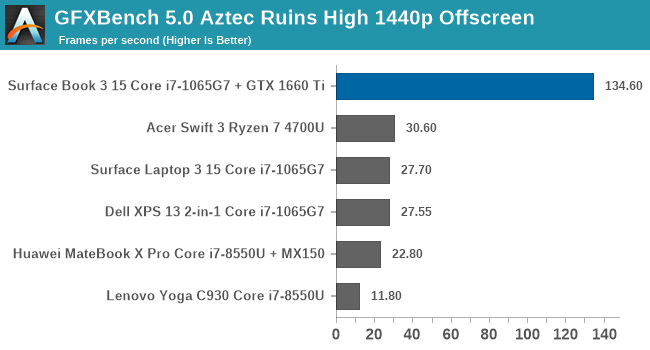 Kishonti’s GFXBench started offering DirectX 12 rendered tests with version 5.0 and instantly made it relevant again. The GTX 1660 Ti handles these tests with aplomb. 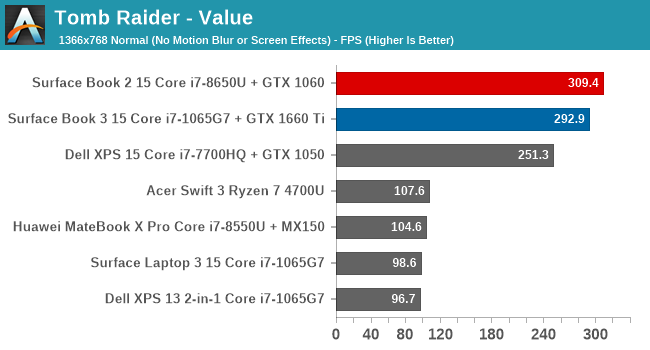 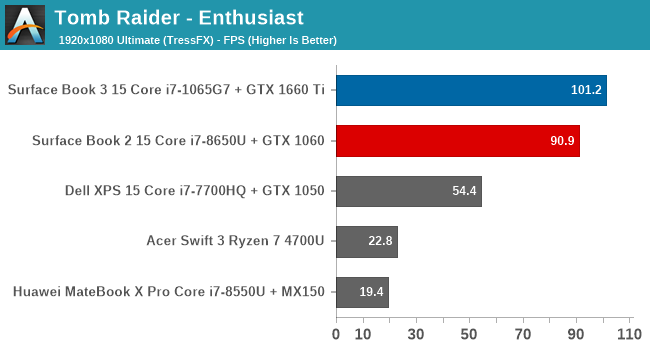 The original Tomb Raider game can be a challenge for devices with integrated GPUs, although the latest AMD Vega and Intel Iris Plus integrated GPUs have come a long way. On Value settings, the old Surface Book 2 was actually slightly ahead, but the Enthusiast level puts things back in the right order.

Rise of the Tomb Raider 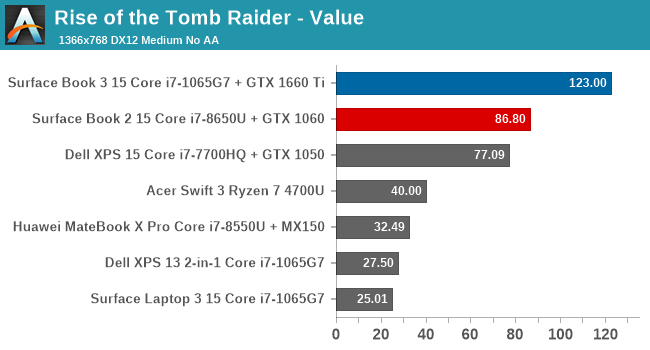 The Tomb Raider sequel added DirectX 12 support and added a lot more visual fidelity, and as such the game is much more demanding. The new Surface Book 3 shows a big jump here.

Shadow of the Tomb Raider

The latest in the franchise is even more demanding. Interestingly the benchmark also shows how often the scene was GPU bound. On the Value settings, it was GPU bound only 8% of the time (and therefore 92% of the time it was CPU bound) but once the settings were turned up to 1920x1080 Highest plus TAA, the Surface Book 3 was GPU bound 93% of the test run.

Once again, the Surface Book 3 shows a significant jump over the outgoing model.

Far Cry 5 is at the limits of what integrated GPUs can achieve right now, but the Surface Book 3 handles this game very well.

Codemasters’ F1 2019 is also playable on integrated graphics, but much more playable on the Surface Book 3.

The NVIDIA GTX 1660 Ti, even in the Max-Q configuration as in this notebook, offers far more performance than the outgoing GTX 1060. The Surface Book 3 is not a “gaming laptop” by any means, but it certainly has the required chops to be used for gaming when needed. The integrated Xbox wireless for connecting a controller is also a perk, and a perk only found on the 15-inch version. The only downside is that the Surface Book’s 3:2 display can be a problem if the game is expecting 16:9, so your mileage may vary.

If you have a GPU-based productivity task though, the Surface Book 3 offers far more performance than other similar devices. The GTX 1660 Ti offers 50% more CUDA Cores than a GTX 1650 Ti. The Surface Book is somewhat compromised on CPU due to the CPU having to be behind the display, but the extra thermal capacity available by separating the heat loads sure lets them stuff a big GPU in the base.