Zotac's ZBOX series of mini-PCs has been receiving lots of updates over the last year or so. In addition to the traditional ZBOX (which, in itself, was small enough to carry with one hand), the lineup has expanded to include the ZBOX nano, ZBOX nano xs and ZBOX pico families (in order of decreasing size). At CES 2015, we got updates in almost all categories.

An evolutionary update to the ZBOX CI320 nano, it features a Haswell-Y Celeron in the place of a Bay Trail-M processor. The Intel Celeron 2961Y clocks in at 1.1 GHz. It is also the first nano C-series SKU to come with two GbE ports. Other than that, the specifications are just like any other C-series Intel-based mini-PC.

This is a traditional ZBOX with a discrete mobile GPU. Like all traditional ZBOX units, it comes with two GbE ports. The gaming credentials of the system is boosted by the presence of a GTX 860M. A Haswell-U processor, the i5-4210U does the CPU duties. The unit can drive 4Kp60 displays over the DVI-I and Display Port outputs. It is also compatible with NVIDIA G-SYNC displays.

Zotac also supplied us with a brochure listing features of their ZBOX units that are currently in the market. One of the tables in it tabulates the features that are available in each series. We are reproducing it below, as we believe readers will find it useful in choosing the right model that fits their needs. 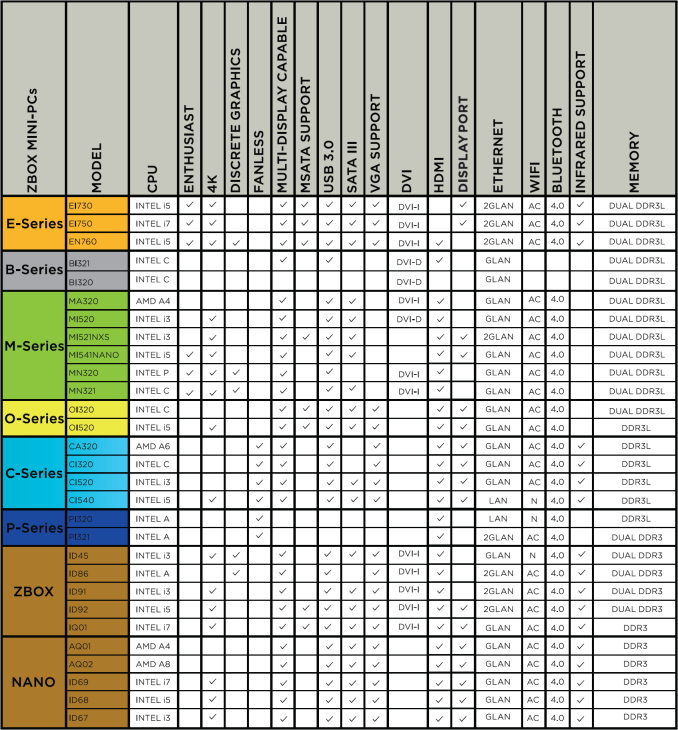 Full pricing details and firm launch dates for the ZBOX models launched at CES 2015 are not yet available.

I had a few suggestions for Zotac when visiting their suite at CES. First of all, for models which have only one SO-DIMM slot, Zotac should put more marketing emphasis on the PLUS models. The drawback of the PLUS units for models with two memory slots is that consumers often do not bother to fill up the free slot. Operating in the single memory channel mode prevents users from realizing the full potential of the computing platform. The quality of the SSDs being used in those PLUS models must also be good (not the FORESEE models in the C-series that we have seen so far). For the premium ZBOX units with two GbE ports, Zotac should opt for Intel GbE transceivers instead of going with Realtek.