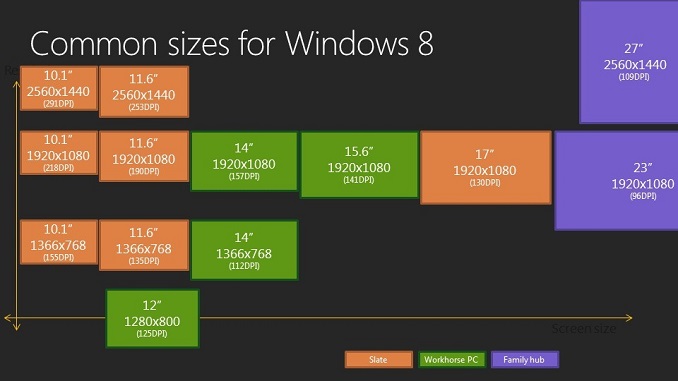 For several years now, mobile device manufacturers have been in a race to push the pixel density of mobile devices higher and higher. The race began with the iPhone 4 “Retina” display – an at the time impressive 330 pixels per inch (PPI) 960x640 3.5” display. Keen to trump the Retina moniker, makers of Android devices soon churned out devices with displays with PPIs of 440 and higher, with the current push to 2560x1440 displays in 5.5” or smaller sizes which yield an amazing 500+ PPI. Next up was a similar race in the tablet space, with 1280x800 soon giving way to 2560x1600 displays, but this time in a 7” to 10” form factor.

All the while, the lowly PC and Mac chugged along with displays that could hardly be called impressive. The standard LCD display of just a few years ago would hover somewhere around 96 PPI, and it was often lower. A 17” LCD with a resolution of 1280x1024 wasn’t an accident – it was exactly 96 PPI, which is what the PC and Mac would render at by default. High resolution laptops would barely squeak past the 120 PPI range. These lower densities – though decent for the longer view distances of desktop monitors – have until recently not been improved on, highlighting the gap in progress between the two devices categories.

In 2012, Apple launched the 15.4” Retina MacBook Pro. At the time it was far and away the highest PPI laptop available. It took a lot of work for Apple to ensure a high resolution display was usable because for really the first time, increased resolution on a computer was used to improve image quality rather than simply to increase screen real estate. How they achieved this was nicely explained by Anand back in 2012. However, OS X wasn’t perfect; certain applications didn’t behave as well as they should have, which resulted in some applications having blurry text or other UI issues. Still, Apple was able to make the Retina display work, and for the applications that were Retina aware, the result was a fantastic experience. If developers updated their applications, their clients could enjoy the high resolution clarity that had already taken over the mobile space.

But what about Windows? Windows Vista, and then Windows 7, both had support for higher DPI (Dots Per Inch) settings; even lowly Windows XP had some support for DPI scaling. The main issue was that there was no market force pushing for High DPI (in the operating system and APIs, it’s referenced as DPI as opposed to the PPI of a display) like there was with the Retina MacBook Pro. OEMs were happy to sell consumers low cost, low resolution 1366x768 TN panels for years. If people don’t demand better, most OEMs are unlikely to provide them better than the basics in such a low margin industry.

What changed was a combination of High DPI tablets and the Retina MacBook Pro putting pressure on the PC industry to offer something better. It has taken a long time, but finally quality displays are something that are important enough to consumers for every single major OEM to now offer at least one, if not multiple, devices with High DPI.