WarFactory Sentinel: Gaming on a Grand

Getting the monster gaming machines from boutiques in house for testing is often at least interesting if for no other reason than to see just how fast a computer can get when all bets are off, but most of us just don't have four or five large to shell out for a gaming machine. What if we still want to play but can only afford to pay a reasonable price? This is the market that boutique builder WarFactory is aiming for with their price and power efficient Sentinel. Does it deliver? 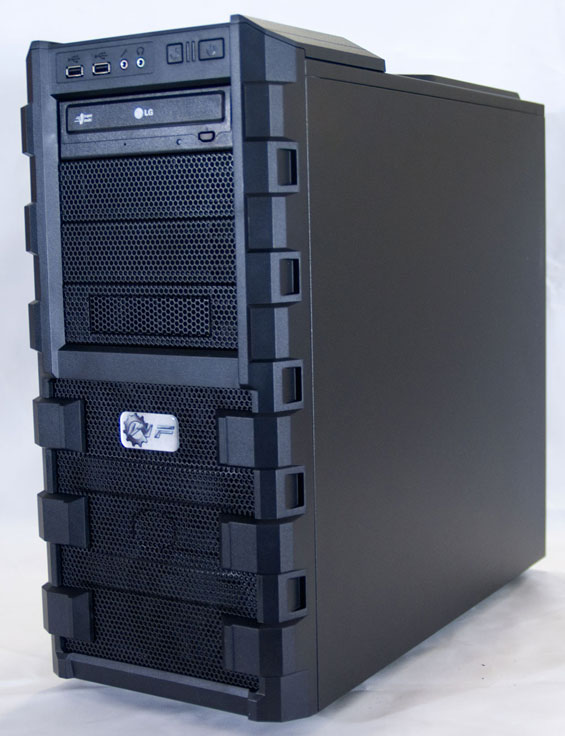 WarFactory sent us their exact stock configuration for the Sentinel, and you'll find visiting their site that they try to keep from swamping the buyer with options. "Here is the standard configuration we ship, and then if you want you can tweak it." It's appreciated, but more than that, this inexpensive build seems to be a relatively thoughtful, balanced configuration.

Hey, we're testing AMD hardware for a change! While the biggest and baddest boutique builds inevitably include an Intel Core i7, WarFactory is gunning for value with the Sentinel and their CPU choice reflects that. The 3.2GHz quad-core AMD Phenom II X4 may not be as fast as Intel's chips, and it certainly isn't a "green" CPU, but it's entirely serviceable for gaming as you'll see later.

WarFactory includes the 955 Black Edition with its unlocked multiplier by default, but curiously doesn't ship with an overclock, nor can it be ordered with one. An overclock isn't strictly necessary but may have helped ameliorate the performance difference between the Sentinel and Intel-powered competition somewhat. Recognizing just how far DDR3 prices have fallen, WarFactory also straps 8GB of G.Skill DDR3-1333 to the Phenom II's integrated memory controller in two 4GB sticks.

Performing gaming duties is the ASUS GeForce GTX 460 TOP 768MB. NVIDIA doesn't really seem to have kept to their spec clocks on this, one of its best price/performance cards, but the 700MHz core clock (and corresponding 1.4GHz on the 336 CUDA cores) is among the lowest available. Still, that isn't a major complaint as the GTX 460 768MB is a perfectly reasonable video card and suitable for gaming up to 1080p.

Reflecting the fundamental sea change in the industry is the Sentinel's storage subsystem. The operating system drive is a Corsair Force F40 40GB SSD using SandForce's SF-1200 chipset, while mass storage duties are handled by a Western Digital Caviar Blue 1TB mechanical drive. The only curiosity here is the use of the Caviar Blue when the Caviar Black with SATA 6Gbps connectivity is largely bog standard in other boutique builds. I don't think it makes much of a difference in terms of performance, but it's an odd choice nonetheless.

Finally, we come to the motherboard, enclosure, and power supply. The ASUS M4A87TD EVO has all the modern connectivity you could ask for, including USB 3.0, and WarFactory smartly opted for a name brand quality power supply in the Corsair 650TX. This is an easy place for a manufacturer to cheap out, and we're grateful WarFactory chose not to. The CoolerMaster HAF 912 is an inexpensive chassis, but it's one that proves that cheap and inexpensive don't mean the same thing. The case is solid, feature-rich, and reasonably quiet.

Perhaps the most interesting aspect of this review is WarFactory's "limited lifetime warranty". The company was founded in 2009, so obviously they haven't been around as long as most of their competitors, but they're making a pretty big claim there. With no overclocking and a selection of high quality parts, the hope is most hardware will never fail (at least not before you retire the system and upgrade). In a sense, offering such a warranty isn't really that different from a 3-year warranty, and if the company folds you'll be stuck with a useless slip of paper, but we do give them credit for not going the cheap 1-year route that we've seen elsewhere.