Many of our mini-PC benchmark programs are available only on 64-bit systems. Since the Intel PPSTK1SW32SC ships with a 32-bit version of Windows 10, many of the benchmarks in our standard test suite for low power desktops / industrial PCs could not be processed on the Compute Stick. As a result, these benchmarks were either removed or adjusted, and this is noted where necessary.

PCMark 8 provides various usage scenarios (home, creative and work) and offers ways to benchmark both baseline (CPU-only) as well as OpenCL accelerated (CPU + GPU) performance. We benchmarked select PCs for the OpenCL accelerated performance in all three usage scenarios. They key takeaway from these graphs is that the red scores (Cherry Trail) are quite a bit better than the blue scores (Bay Trail) when considering the fact that they are both systems with a similar form factor and power consumption profiles. Obviously, the more powerful / higher TDP Braswell systems such as the Beebox come out on top when compared to the Cherry Trail Compute Stick. 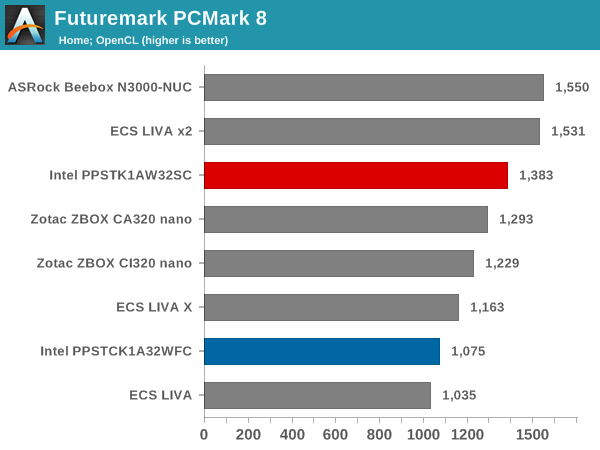 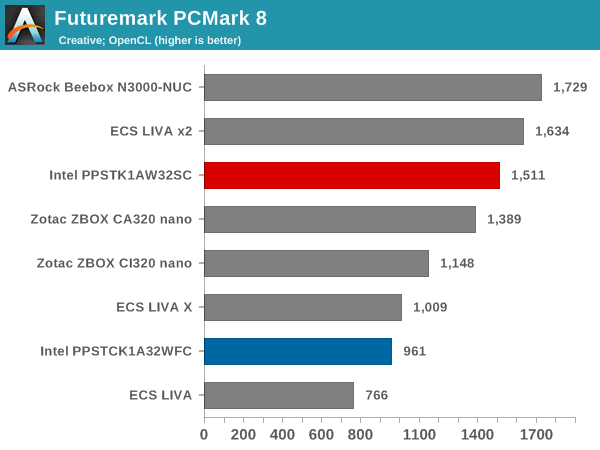 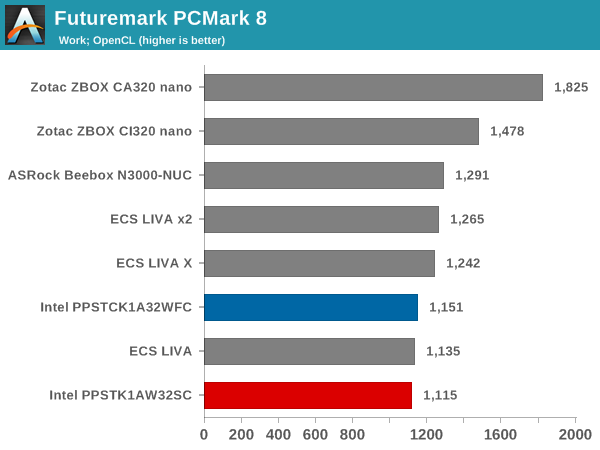 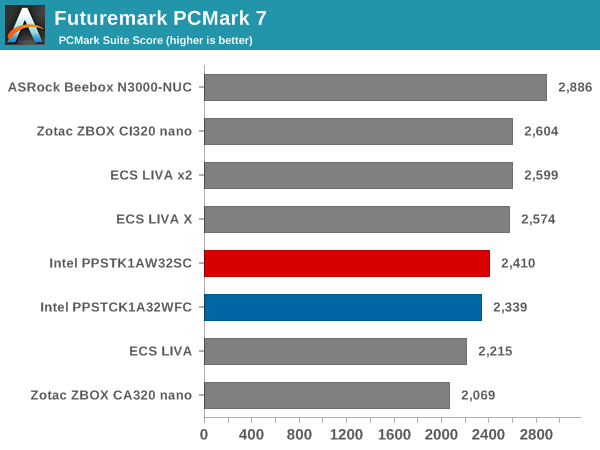 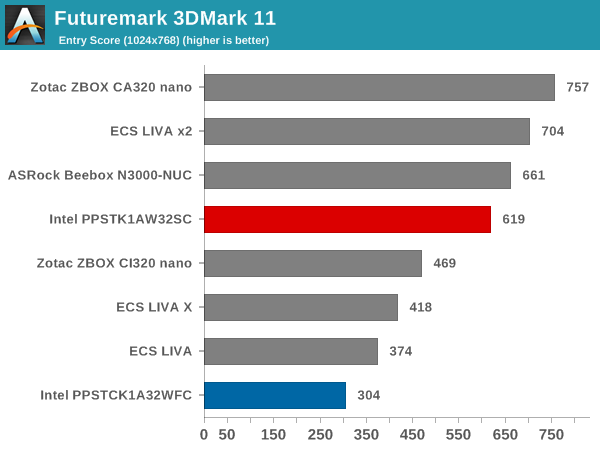 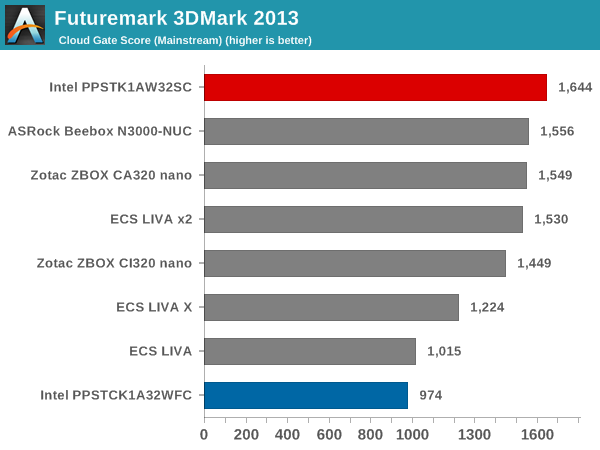 The lead in the GPU section is much more for Cherry Trail compared to the benchmarks where both CPU and GPU both matter.

We now move on to look at the benchmark modes in programs used on a day-to-day basis, i.e, application performance and not synthetic workloads.

First off, we have some video encoding benchmarks courtesy of x264 HD Benchmark v5.0. This is simply a test of CPU performance. We should be expecting Cherry Trail to win easily, but repeated benchmark trials always placed it a bit below the Bay Trail Compute Stick in the first pass (the second pass is as expected). Though we didn't track how long the Cherry Trail unit spent at the maximum burst frequency (1.84 GHz in theory, but only 1.6 GHz in practice, as we will see later), we believe that the Bay Trail unit is able to spend more time in that mode (max. burst of 1.83 GHz) compared to the Cherry Trail unit. It should also be noted here that the Bay Trail SoC has a SDP of 2.2W compared to the Cherry Trail's 2W. It is possible that the change in OS might also have played a role. Everything other than the Cherry Trail Compute Stick in the graph below was evaluated with Windows 8.1 Professional x64. 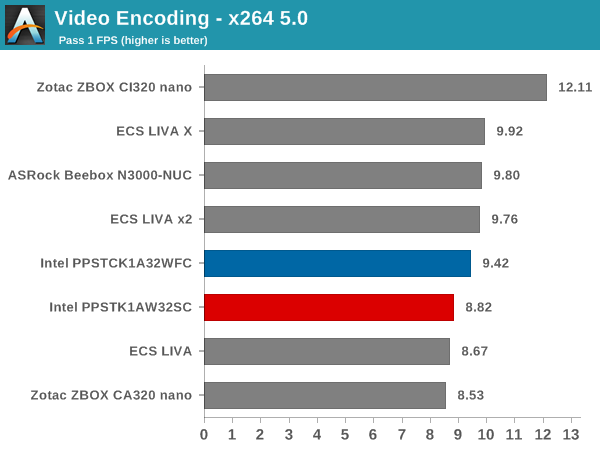 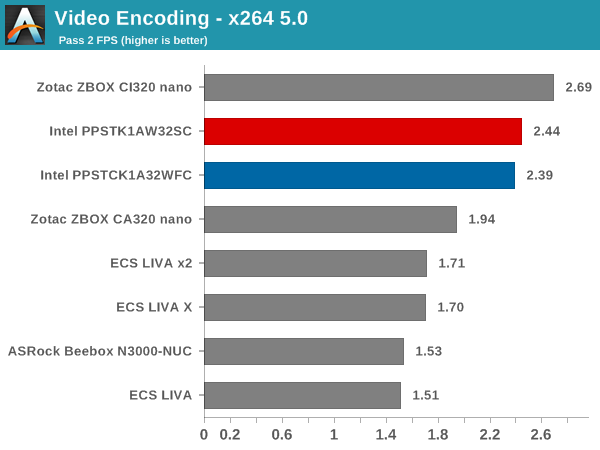 7-Zip is a very effective and efficient compression program, often beating out OpenCL accelerated commercial programs in benchmarks even while using just the CPU power. 7-Zip has a benchmarking program that provides tons of details regarding the underlying CPU's efficiency. In this subsection, we are interested in the compression and decompression MIPS ratings when utilizing all the available threads. The observed results are similar to what we obtained for the x264 benchmark. 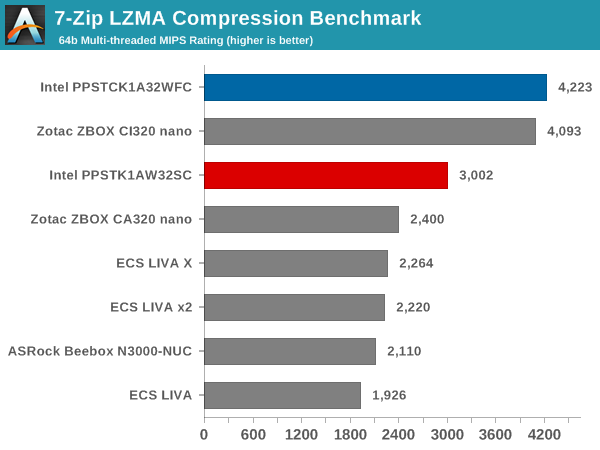 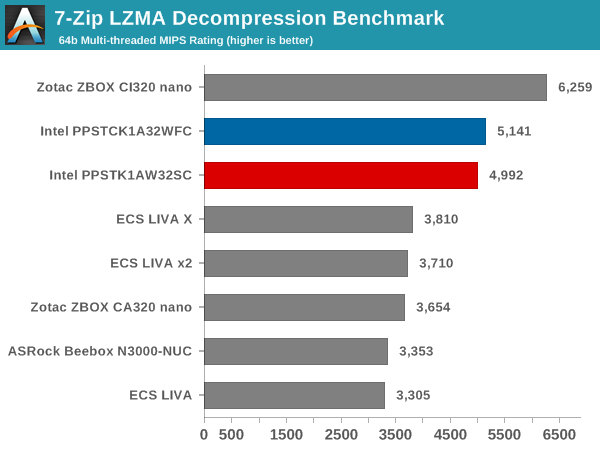 As businesses (and even home consumers) become more security conscious, the importance of encryption can't be overstated. CPUs supporting the AES-NI instruction for accelerating the encryption and decryption processes have, till now, been the higher end SKUs. However, with Bay Trail, even the lowly Atom series has gained support for AES-NI. The Atom x5-Z8300 in the Cherry Trail Compute Stick does have AES-NI support. TrueCrypt, a popular open-source disk encryption program can take advantage of the AES-NI capabilities. The TrueCrypt internal benchmark provides some interesting cryptography-related numbers to ponder. In the graph below, we can get an idea of how fast a TrueCrypt volume would behave in the Intel PPSTK1AW32SC and how it would compare with other select PCs. This is a purely CPU feature / clock speed based test and Cherry Trail comes out on top easily. 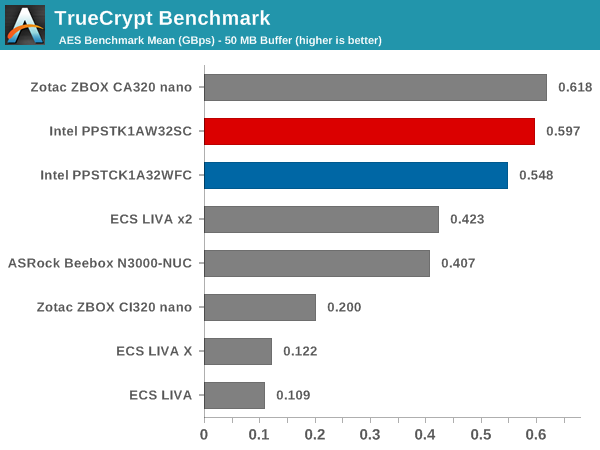