Today marks the opening of the 12th Intel Developer Forum; for six years Intel has been putting on these developer forums but they have attracted much more than a simple software crowd. IDF has become a place for the AnandTech Community to get a look into Intel’s world and it has historically been a place for many interesting announcements.

At past IDFs we have seen technologies such as NetBurst and Hyper-Threading unveiled not to mention the clock speed barriers have been consistently broken at IDF; just six months ago we were shown a 4GHz Pentium 4 processor and today is looking to surpass that demonstration as well. 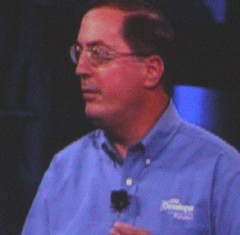 Today’s keynote started at 1PM PST, which is quite common for the first day of IDF. The day usually starts later than normal, either that or is moved to the Tuesday of IDF week. The keynote was given by Paul Otellini, President and COO of Intel; unfortunately the keynote started off on a relatively slow note with most of the material being a regurgitation of past IDFs.

Although the latter part of the presentation held some interesting demos from Intel, the majority of the presentation was stolen by Microsoft with some interesting demos of their Windows XP Tablet PC Edition. Much of Intel’s presentations were ridden with too much satirical propaganda and not enough meat unfortunately; even a normally energetic Pat Gelsinger seemed to be unenthused during his introduction, maybe it was just because he wasn’t talking about his usually very interesting engineering topics. Hopefully things will get better as the week goes on. 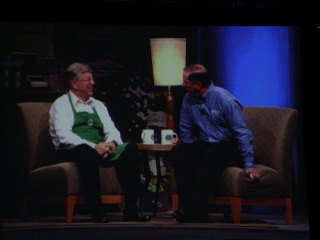 Orin Smith, CEO of Starbucks stopped by to serve coffee and talk about 802.11 in Starbucks coffee houses.

Intel’s major announcements included the opening of a software college to train developers in optimizing for the next-generation of multithreaded/multicore CPUs as well as a ~500M transistor count for the Madison Itanium 2 core.