The Fall 2002 Intel Developer Forum does not officially start for another couple of hours but we're already ready to bring you some information directly from the forum in San Jose, California. 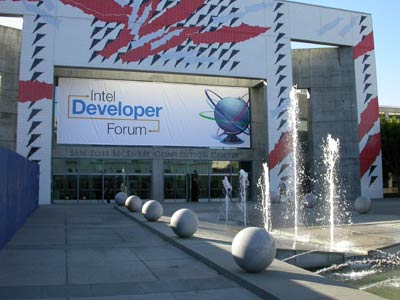 Our first meeting of the day was with members of Intel's Microprocessor Research Lab and as you can expect, the topic of discussion was quite interesting. We'll get to some of the things disclosed in a bit, but first we'll talk a little about the show itself.

For the first time in quite a while the Intel Developer Forum has not been crashed by AMD; if you'll remember just 6 months ago AMD stole the show with the world's first public demonstration of Hammer. According to AMD they won't be at IDF:

"The real reason is that this is the week of September 11th and we didn't think it would be appropriate to set up shop at IDF to bang a drum or show off the latest hardware/software/other bits when most folks have their minds on friends and family during this somber time."

So unfortunately (and understandably) you won't be seeing any more Hammer photos or information during our week at IDF.

With that said, there's a number of things that you will be seeing this week. There's going to be a lot of talk about the first Hyper-Threading enabled Pentium 4 CPUs, we're going to learn a little more about the mobile-wonder known as Banias, and although we won't see a demonstration of it at the show, some Prescott information should be flowing this week as well.

As usual, to stay on top of our IDF coverage be sure to subscribe to the AnandTech Newsletter as we'll be sending out most of our coverage over the Newsletter first.