We have only been here for ten hours and already we have seen more at this years Computex than we could have hoped for. We came into the show not knowing what to expect. Taking into account that we are not too far removed from the slowest Comdex in memorable history and the fact that the tech market remains lower than it was at our first Computex in 2000, we hoped for signs of life at Computex 2002. We would not be disappointed.

Our first day at Computex 2002 was filled with much meeting, walking, and picture taking. Although it does not seem quite as busy as last year, the show was noticeably more packed than the ghost town that was Comdex 2001. 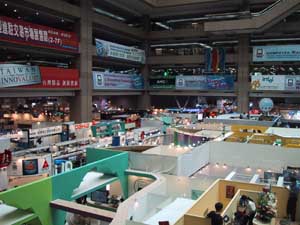 On our first day we got a chance to see quite a few motherboard solutions based on a variety of chipsets. As we discussed in our initial coverage of the show, AMD and AMD enabling products were out in full force. We saw Clawhammer solutions by every motherboard manufacturer we got a chance to visit today. Also making an appearance were a few KT400 motherboards, furthering the presence of AMD enabling motherboards. Solutions were not limited to AMD, as motherboard producers were displaying a number of solutions on Intel's latest 845 series chipsets. We also got a peek at the upcoming Granite Bay chipset solution from Intel, promising dual channel DDR memory and AGP 8x support. Let's take a look at what stood out the most on our first day at Computex 2002.

In our first Newsletter update from Computex 2002 we brought you coverage of AMD's Hammer/Opteron processors and their chipsets. Continuing with our live coverage from the show floor we have more information about Hammer motherboards as well as VIA's KT400 chipset and Intel's Granite Bay chipset (dual-channel DDR desktop Pentium 4 chipset).

As usual, this information is provided first to our Newsletter subscribers and you can be on the list to receive these live updates by subscribing here. The Newsletter is free and you'll get the information well before it even hits the website.