A Brief Overview of G-SYNC

While the other performance characteristics of a monitor are usually going to be the primary concern, with a G-SYNC display the raison d'etre is gaming. As such, we’re going to start by going over the gaming aspects of the XB270HK. If you don’t care about gaming, there’s really not much point in paying the price premium for a G-SYNC enabled display; you could get very much the same experience and quality at a lower price. Along with the G-SYNC qualification, it should go without saying but let’s make this clear: you’ll want an NVIDIA GTX level graphics card to take advantage of G-SYNC. With that out of the way, let’s talk briefly about what G-SYNC does and why it’s useful for gaming. We’ve covered a lot of this before, but for those less familiar with the reason we can benefit from technologies like G-SYNC we’ll cover the highlights.

While games render their content internally, we view the final output on a display. The problem with this approach is that the display normally updates the content being shown at fixed intervals, and in the era of LCDs that usually means a refresh rate of 60Hz (though there are LCDs that can be run at higher rates). If a game renders faster than 60 FPS (Frames Per Second), there’s extra work being done that doesn’t provide much benefit, whereas rendering slower than 60 FPS creates problems. As the display content is updated 60 times per second, there are several options available. 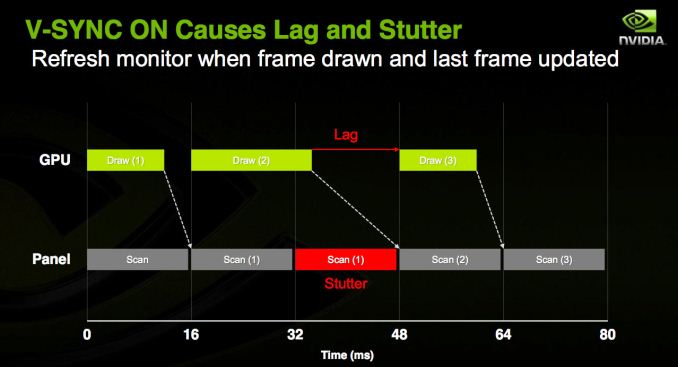 As you might have guessed, there are problems with each of these approaches. In the case of enabling VSYNC, this potentially limits your frame rate for each frame to half (or one-third, one-fourth, etc.) your refresh rate. In the worst case, if you have a PC capable of rendering a game at 59 FPS it will always take just a bit too long to finish the frame and the display will wait for updates, effectively giving you 30FPS. Perhaps even worse, if a game runs between 55-65 FPS, you’ll get a bunch of frames at 60 FPS and a bunch more at 30 FPS, which can result in the game stuttering or feeling choppy. 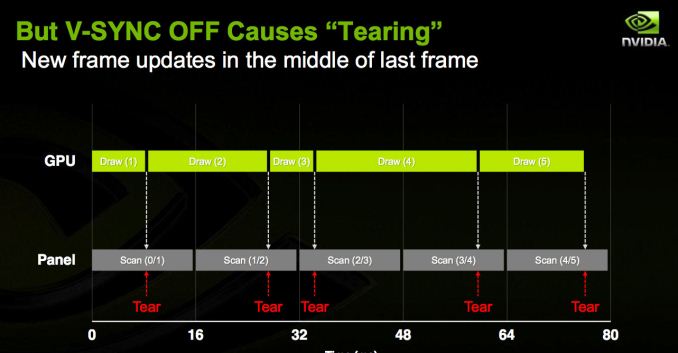 Turning VSYNC off only partially addresses the problem, as now the display will get parts of two or more frames each update, leading to image tearing. Triple buffering tries to get around the issue by using two off-screen buffers in addition to the on-screen buffer, allowing the game to always keep rendering as fast as possible (one of the back buffers always hold a complete screen update), but it can result in multiple frames being drawn but never displayed, it requires even more VRAM (which can be particularly problematic with 4K content), and it can potentially introduce an extra frame of lag between input sent to the PC and when that input shows up on the screen. 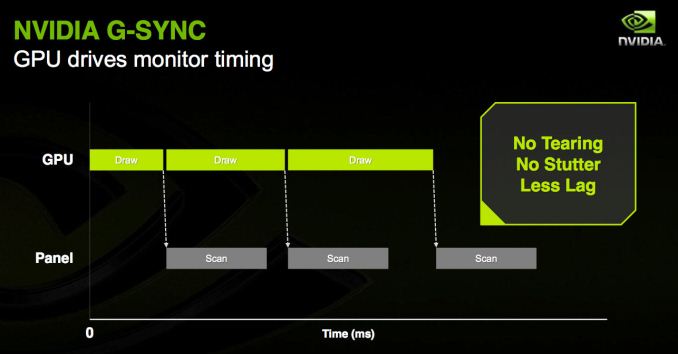 G-SYNC is thus a solution to the above problems, allowing for adaptive refresh rates. Your PC can render frames as fast as it’s able, and the display will swap to the latest frame as soon as it’s available. The result can be a rather dramatic difference in the smoothness of a game, particularly when you’re only able to hit 40-50 FPS, and this is all done with no image tearing. It’s a win-win scenario...with a few drawbacks.

First as noted above is that G-SYNC is for NVIDIA GPUs only. (AMD’s FreeSync alternative should start showing up in displays later this month, as working products were demoed at CES). The second is that the cost of licensing G-SYNC technology from NVIDIA along with some additional hardware requirements means that G-SYNC displays carry a price premium compared to otherwise identical but non-G-SYNC hardware.

We’ve had G-SYNC displays for most of the past year, though the earliest option was a DIY kit where you had to basically mod your monitor, but the Acer XB280HK is something new: a 4Kp60 G-SYNC display. That’s potentially important because where high-end GPUs might easily run most games at frame rates above 60 FPS at 1920x1080 and even 2560x1440, even a couple of GTX 980 GPUs will struggle to break 60 FPS at 4K with a lot of recent releases. My personal feeling is that G-SYNC with 60Hz displays makes the most sense when you can reach 40-55 FPS; if you’re running slower than that, you need to lower the quality settings or resolution, while if you’re running faster than that it’s close enough to 60 FPS that a few minor tweaks to settings (or a slight overclock of the GPU) can make up the difference.

To get straight to the point, G-SYNC on the XB280HK works just as you would expect. For those times when frame rates are hovering in the “optimal” 40+ FPS range, it’s great to get the improved smoothness and lack of tearing. In fact, in many cases even when you’re able to average more than 60 FPS, G-SYNC is beneficial as it keeps the minimum frame rates still feeling as smooth as possible – so if you’re getting occasional dips to 50 FPS but mostly staying at or above 60, you won’t notice the stutter much if at all. Without G-SYNC (and with VSYNC enabled), those dips end up dropping to 30 FPS, and that’s a big enough difference that you can see and feel it.

There are problems however, and the biggest is that the native resolution of 3840x2160 still isn’t really ready for prime time (i.e. mainstream users). If you’re running a single GPU, you’re definitely going to fall short of 40 FPS in plenty of games, so you’ll need to further reduce the image quality or lower the resolution – and in fact, there are plenty of times where I’ve run the XB280HK at QHD or even 1080p to improve frame rates (depending on the game and GPU I was using). But why buy a 4K screen to run it at QHD or 1080p? Along with this, while G-SYNC can refresh the panel at rates as low as 30Hz, I find that anything below 40Hz will start to see the pixels on the screen decay, resulting in a slight flicker; hence, the desire to stay above 40 FPS.

The high resolution also means working in normal applications at 100% scaling can be a bit of an eyestrain (please, no comments from the young bucks with eagle eyes; it’s a real concern and I speak from personal experience), and running at 125% or 150% scaling doesn’t always work properly. Before anyone starts to talk about how DPI scaling has improved, let me quickly point out that during the holiday season, at least three major games I know of shipped in a state where they would break if your Windows DPI was set to something other than 100%. Oops. I keep hoping things will improve, but the software support for HiDPI still lags behind where it ought to be.

The other problem with 4Kp60 is that… well, 60Hz just isn’t the greatest experience in the world. I have an older 1080p 3D Vision display that would run the Windows desktop at 120Hz, and while it’s not the sort of night and day difference of some technologies, I definitely think 75-85 Hz would be a much better “default” than 60Hz. There’s also something to be said for tearing being less noticeable at higher refresh rates. And there’s an alternative to 4Kp60 G-SYNC: 1440p144 (QHD with 144Hz) G-SYNC also exists.

Without getting too far off the subject, we have a review of the ASUS ROG Swift PG278Q in the works. Personally, I find the experience of QHD with G-SYNC and refresh rates of 30-144 Hz to be superior for the vast majority of use cases to 4K 30-60Hz G-SYNC. Others will likely disagree and that’s fine, but on a 27” or 28” panel I just feel QHD is a better option – not to mention gaming at acceptable frame rates at QHD is much easier to achieve than 4K gaming.

There are some other aspects of using this display that I noticed, and while they're probably not a huge issue as most people will be using the XB280HK with NVIDIA GPUs, it’s worth noting that the behavior of my XB280HK with AMD GPUs has at times been quirky. For example, I purchased a longer DisplayPort cable because the included 2m cable can be a bit of a tight reach for my work area. The 3m cable I bought worked fine on all the NVIDIA GPUs I tested, but when I switched to an AMD GPU… no such luck. I had to drop to 4K @ 24Hz to get a stable image, so I ended up moving my PC around and going back to the original cable. 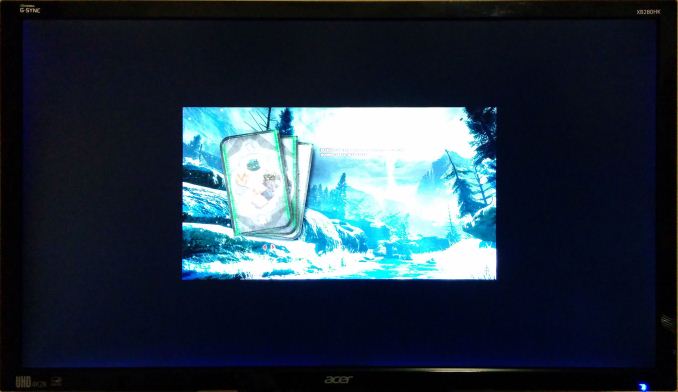 I’ve also noticed that a very large number of games with AMD GPUs don’t properly scale the resolution to fill the whole screen, so QHD with AMD GPUs often results in a lot of black borders. Perhaps even worse, every game with Mantle support that I’ve tried fails to scale the resolution to the full screen when using Mantle. So Dragon Age Inquisition at 1080p with Mantle fills the middle fourth of the display area and everything else is black. The problem would seem to lie with the drivers and/or Mantle, but it’s odd nonetheless – odd and undesirable; let's hope this gets fixed.