Today Google updated the stable version of their Chrome browser to version 37.0.2062.94 on Windows, OS X, and Linux. This is a highly anticipated release for users on Windows specifically, as it marks the move from Microsoft's Graphics Device Interface rendering method to Microsoft's DirectWrite text rendering API. Using GDI resulted in significantly worse text rendering in Chrome compared to other browsers like Internet Explorer and Mozilla Firefox. The issue was also non-existent on Google's versions of Chrome for OS X and Linux which use font renderers native to their own operating systems. Switching to DirectWrite has been requested for years by users on Windows, and Google has stated that it took significant rewriting of their font rendering engine which is why it has taken so long.

The issue was more pronounced in some areas than others. Below we have a screenshot of a section of my own website which has always had significant issues with font rendering in Chrome. Somewhat funny is the fact that the fonts used are sourced from Google fonts.

The aliasing in the font rendered on Chrome 36 is quite apparent. Some letters even have entire areas that appear to be chopped off, like the top and bottom of the letter 'O'. On Chrome 37 the rendering is significantly improved. There's far less aliasing on fonts, no missing chunks from letters, and even the double down arrow glyph inside the circle looks much sharper. 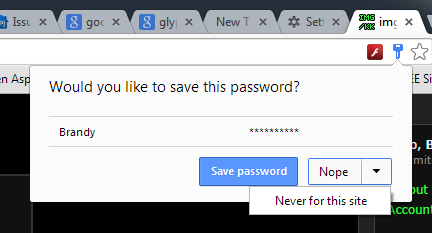 While Google didn't detail it in their changelog, Chrome 37 also includes the new password manager interface that existed on the beta for Chrome 37. When on the login page for a website, a key will appear in the search bar with a list of all saved passwords for that website. This also replaces the bar that would appear at the top asking to save a username and password after entering it for the first time.

Google's changelog also states that Chrome 37 has a number of new APIs for apps and extensions, as well as many under the hood changes for improved performance and stability. There are also 50 security fixes, with the most interesting or significant fixes detailed in the source below.