Unfortunately due to our refresh, this section is a little truncated, but I'm hoping it will at least be somewhat enlightening. My primary interest here is in the comparison between the NVIDIA GeForce GTX 675M and the GTX 675MX, and secondary is the mild evolution from the Intel Core i7-3610QM to the i7-3630QM. Until we get some more gaming notebooks in (and we do have more on the way), you're going to see this gaming behemoth tussling with notebooks well below its weight class. 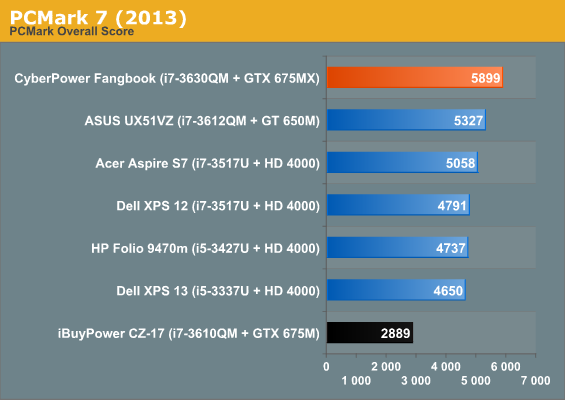 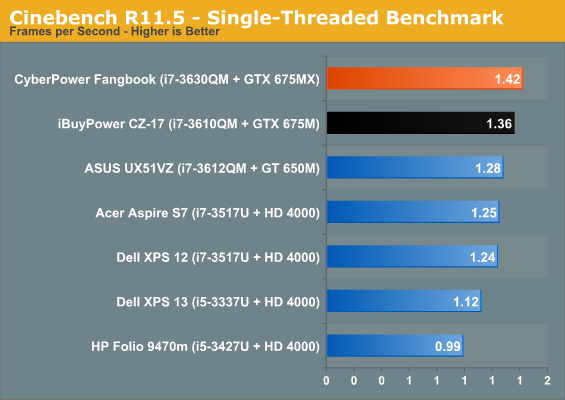 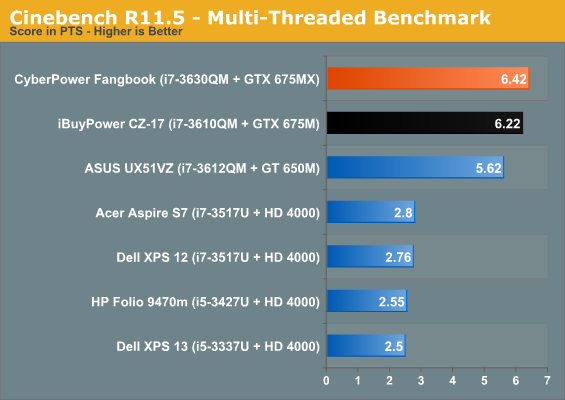 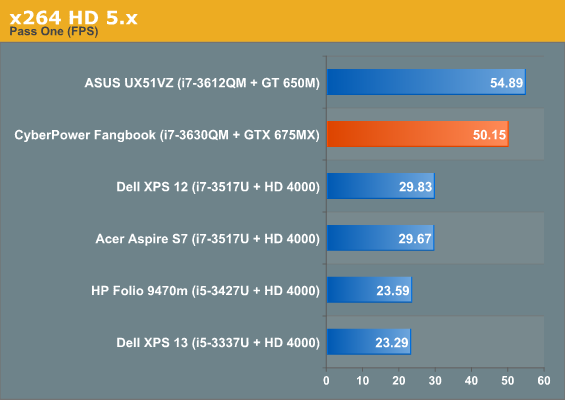 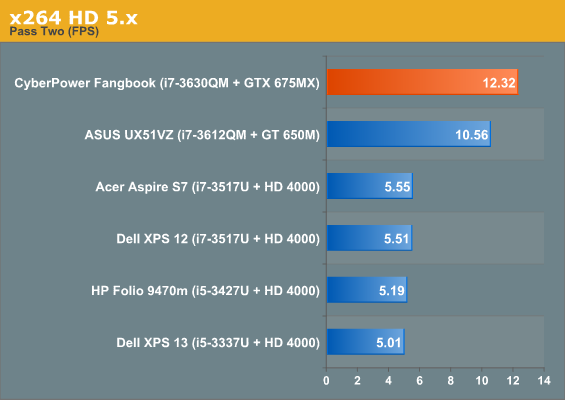 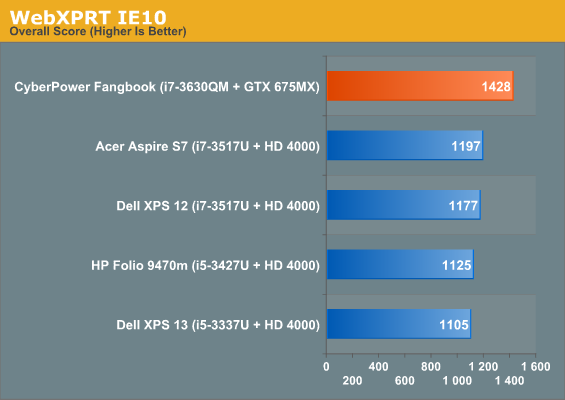 Our CPU-based benchmarks are unsurprising since the i7-3630QM in the FangBook is fighting it out with dual core processors running at a third of the voltage. The 3630QM's improvement on the 3610QM is as incremental as you'd expect; note that in PCMark 7, the Valkyrie falls well behind. That's due to the Valkyrie not shipping with an SSD standard at the time, which hamstrings performance in PCMark. 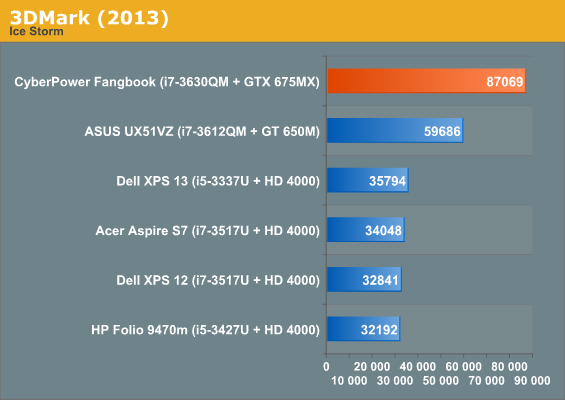 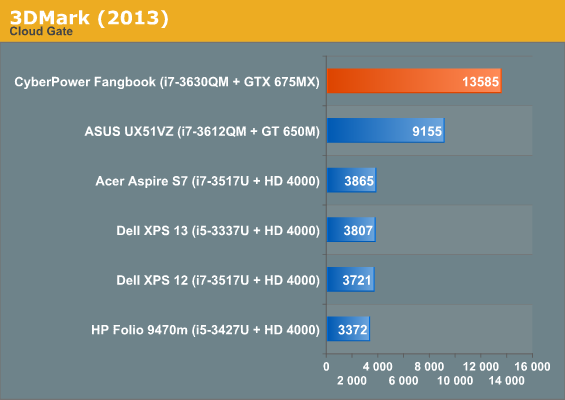 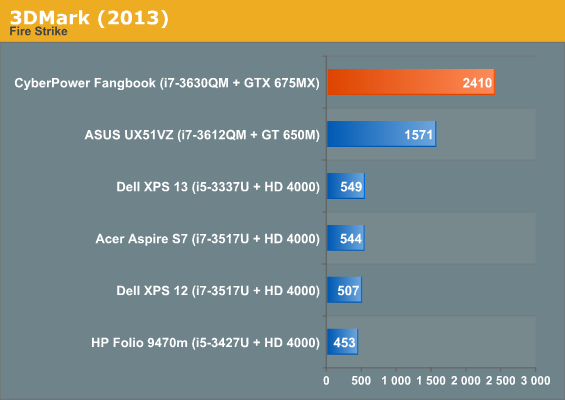 Remember that Intel optimizes for 3DMark, so their best case scenario is being a third as fast as a 100W dedicated GPU. In practice it's obviously a much bigger difference. 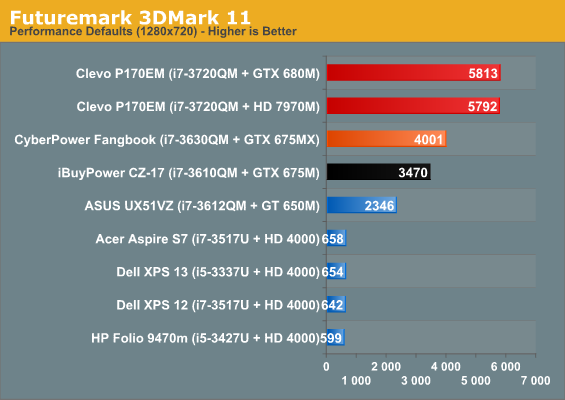 Until we have more results from gaming notebooks in our new testbed, we're kind of stuck with 3DMark 11 to tell us the story, and it's an interesting but unsurprising one. First, the GTX 675MX is about 115% as fast as the GTX 675M, which is a decent jump and roughly around what we should expect. What's more interesting is the absolutely staggering gulf between the 675MX and the 680M and AMD Radeon HD 7970M. This isn't surprising; the 680M is a GK104 with just one shader cluster disabled, so it should be running roughshod on the 675MX. This speaks to a need for NVIDIA to have something to bridge that gap, though. The 675MX isn't even hanging out in the 680M's neighborhood, but unfortunately it's the fastest chip CyberPowerPC will sell you in the FangBook. Interestingly, iBuyPower can't beat it, but AVADirect will sell you an identically configured notebook with the same chassis and a 680M for another $400. That kind of pricing won't set the world on fire, but if you want the best mobile gaming experience you can get before going multi-GPU, the 680M is probably worth the money.

We know how the 675M and 675MX compare to each other in synthetics, but how do they stand in practice? As it turns out, the gulf between them isn't particularly wide. Note that the stand-in for the 675M is my own Alienware M17x R3 with an i7-2720QM and GTX 580M. Since the 580M and 675M are nigh identical, this is a valid comparison, though my CPU is a generation behind and slightly slower than the FangBook's. All of these results use NVIDIA's beta 320.00 drivers.

At these settings all of the games are very playable, so there's no real news to report here. It's interesting to note that Tomb Raider appears to be CPU limited here, though.

Put a little more stress on the GPUs, and they...reduce the gap? At 1600x900, performance gains drop for three of the games. Only Sleeping Dogs and Tomb Raider see improvements.

Improvements really depend on the game you're playing, but the GTX 675MX isn't the vastly superior chip we were expecting. While it's consistently faster than the GTX 675M (as it should be), it's not fast enough to merit seeking out if you already have a 580M/675M. I was honestly expecting and hoping for a more robust improvement, but the difference is fairly incremental.

Given that these are extremely high end GPUs, aftermarket ones aren't as difficult to find. I had a 680M running in my M17x R3 for a little while, and it definitely can be done and done stably (though you do sacrifice Optimus). If you're operating on last generation's top end, like the 580M or the HD 6990M, a jump to an HD 7970M or 680M will absolutely produce a substantial gaming improvement. It's the more incremental upgrades like the 675MX that are less attractive.