It's easy to mistake the Cooler Master Seidon 240M as another Asetek design; apparently Asetek thought it was close enough that it was worth suing Cooler Master over. How that suit pans out remains to be seen, but the Seidon 240M definitely has enough distinctive characteristics to make it worth evaluating on its own. 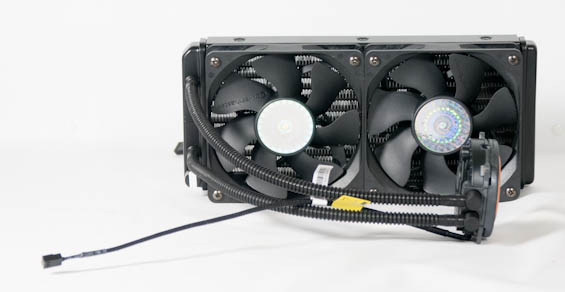 Cooler Master may not have been doing well in our recent radiator fan roundups, but the two fans they've included for the Seidon 240M's 240mm radiator appear to be the same breed as the fan they use on the widely loved (and rightfully so) Hyper 212 Evo air cooler. Unfortunately, while the waterblock is copper and of Cooler Master's own design, the radiator uses aluminum fins much like competing units from Asetek and CoolIT, and you'll see later that this does have a tangible negative impact on performance. 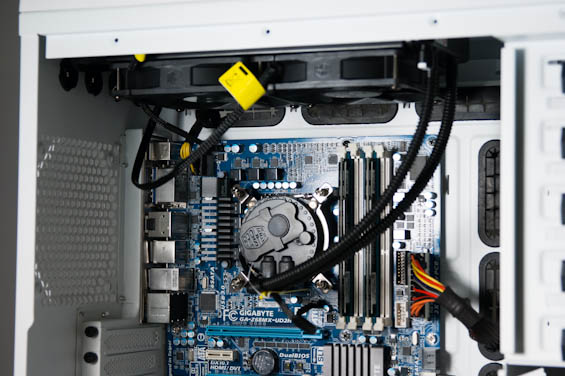 Where Cooler Master beats just about everyone else, though, is in their mounting system. The mount for the waterblock is freakishly simple and secure; there are a pair of brackets that get screwed on to the waterblock (one for AMD and one for Intel), along with an adjustable backplate that comes out of the box ready for LGA 1155/1156. Four screws come up through the mounting holes in the motherboard, and then bolts attach to those. The brackets attached to the waterblock then screw into those bolts. It's actually a very simple design and nowhere near as finicky as Asetek's, CoolIT's, or even Swiftech's.

As for fan control, Cooler Master is a step ahead of Corsair's H90 and H110 coolers: the pump uses a standard 3-pin connector and can be connected to any motherboard fan header, while there's a splitter for the two PWM fans included to use the single CPU fan PWM header on the motherboard. No proprietary software, just clean use of the motherboard's integrated fan control. I honestly prefer this approach to Corsair's Corsair Link software and NZXT's Kraken Control, but your mileage may vary.