The MSI Z77IA-E53 retails for $145, the cheapest of the roundup, below the $160 for the Zotac and $150 for the ASRock.  For the money, we get a motherboard oriented such that the chipset is above the socket, an odd location for the CPU Power connector, and a novel combination of features on board.  We have access to the Realtek ALC892 audio codec and Realtek 8111E GbE NIC, a single HDMI video connection, a single VGA connection, no on/off buttons or debug LED, but an included WiFi module.  There are no extra SATA or USB controllers, with MSI deciding to forgo these additional features for the sake of a PS/2 combination port and a ClearCMOS button on the rear IO.

In terms of design, the orientation of the features gives rise for concern – especially the placement of the CPU power connector. As it is near the rear IO at the bottom of the board just above the PCIe slot, it stands to reason that some home builds of this machine will require a PSU cable to reach over most of the motherboard or the GPU – not an ideal solution.  One design choice I do agree with however is the placement of the onboard battery – rather than using PCB space in a flat configuration, or placement issues in an upright position, we have it stuck to the rear IO.  As long as the adhesive holds there should be no issues.  Ideally I guess it be better if it was fixed into the chipset heatsink.

Despite the size of mITX, MSI have gone with full length DDR3 instead of SO-DIMM, and these slots also exhibit a single sided latch system for easy placement and removal.  The socket location is right up against the memory and PCIe slot, meaning that CPU coolers have to conform to Intel’s x-y dimension specifications and any GPU with a back plate may have issues depending on the cooler used.

Performance wise, the only snag with the MSI board (as with any 7-series MSI board we have tested recently) is the USB 2.0 speed.  Despite this being part of the chipset, the peak speeds we achieve are only ~25 MBps read and write, rather than the 32+ we see on any other motherboard.  It also seemed odd that our POST times when running a stripped setup in the BIOS were actually 33% longer than normal POST – 12.68 seconds for a ‘stripped’ POST against 9.63 seconds for a default POST with a single GPU installed.

I still maintain that MSI have some design wins in the BIOS, especially by giving the information regarding the setup on the front screen and this information being continually present throughout what option in the BIOS you choose.  The BIOS options themselves could be laid out better, and the idea of a graphical and interactive interface has only been half-attempted.  In terms of software, MSI keeps a user up-to-date with their Live Update system which checks the servers for updates.  This can be useful if there is a minor patch needed to be pushed through for better performance, or an irritant if a user wants to just plug and play.  I rather like it when I can get it to work – I had to use the latest version of Live Update 5 from the website rather than the one on the install disk to get it to play ball.

All-in-all, the MSI board in terms of features and performance offers nothing above the grade, and if anything the USB 2.0 speed is a constant malady that needs sorting out.  The BIOS and software design though are in the top tier if you want a deep interaction with your product.

In the year 2012, we have seen a variety of motherboard designs to titillate almost all the colors of the rainbow – yellow, orange, green, gold, red and blue for the most part.  (I am still waiting on the pink, the white and the grey.)  Normally a specific color scheme is for a product range, such as ROG, G1 or Fatal1ty.  In the case of MSI, the normal scheme is the MSI logo blue combined with black.  To do such a scheme on a mITX board should be easy – a mITX board is a niche product after all with a lot of potential.  The downside comes when allocating colors for SATA connections, or trying to hide controllers and routing along with all the advertising and writing on board.  For example, if a company has bulk-purchased their plastic connections 12-18 months ago, and are at a stage in their stock pile that only two colors are left., rather than the expense of buying more, they reuse the older ones until the stock is gone.  Exceptions are made, such as the ROG and G1 lines of the other companies that are building brand names.  As a result on the MSI Z77IA-E53, we get an attempt at black and blue, but the presence of white/black SATA ports, a red USB header, and the silver from all the solder points detracts from the aesthetics. 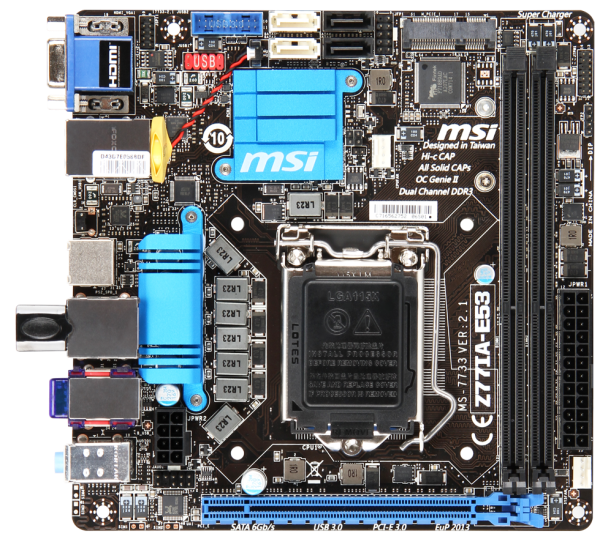 Like many of the other Z77 mITX boards on the market, MSI have decided to place the socket below the center of the board.  This, as mentioned previously, has a couple of serious implications on the design.  Firstly, the socket is at the minimum specified distance away from both the PCIe slot and the memory slots, meaning that all CPU coolers must conform to the Intel specification in the x and y directions.  This limits large air coolers, and large GPUs with back plates may have trouble fitting in.  The second issue comes from the presence of the power delivery – having the socket in this area means that the 12V CPU Power Connector is in an awkward position.  In the case of the MSI Z77IA-E53, it is to the bottom left of the socket, and as such, any attempt to plug the connector in will need the cable to either stretch over the board, or stretch over a GPU.  Neither is ideal when trying to produce a clean system build.  A final issue is the location of the IO – as the chipset is near the top of the board, so are all the connections for USB and SATA ports.   Due to the limited space to place components and features, the inclusion of a mini-PCIe/mSATA comes at the loss of a USB 2.0 header and two SATA 3 Gbps ports.  This is up to the manufacturer, but at least MSI moves the on-board battery out of the way with some adhesive and places it on the rear IO. 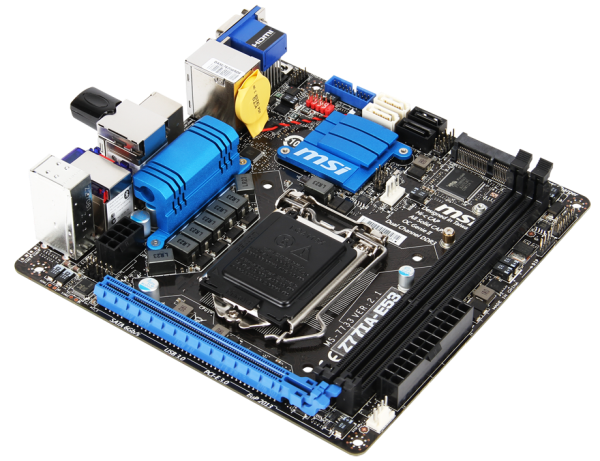 Back into the board itself, we have two fan headers to use – one CPU 4-pin just above the socket, and a SYS 4-pin below the 24-pin ATX power connector.  The power delivery uses a small bulky heatsink that hugs the IO panel, and we find the 8-pin CPU power connector just below this. The chipset heatsink by comparison is very small and flat, but should still be designed to dissipate the 7-8W that the chipset can produce.  From the top left we get a red USB 2.0 header, a blue USB 3.0 header, the connection and wires for the on-board battery, two SATA 6 Gbps in white, two SATA 3 Gbps in black, the 4-pin CPU fan header to the right of the chipset, and an mSATA/mini-PCIe connection next to the memory slots.  This mSATA/mini-PCIe will take any standard device for those two protocols, with the option to switch between the two found in the BIOS.  The Fintek F71889AD chip underneath the spot where a mPCIe device would be is a SuperIO chip designed to add in the PS/2 functionality as well as hardware monitoring.  Also to the right of the memory slots is a TPM header.  This space between the memory and the edge of the board would be perfect to put power/reset switches or a debug LED (like on the Zotac mITX), but unfortunately all we get are components.

The rear IO is a little bleak due to the large gap in the middle.  Other mITX boards we have reviewed have tried to do something a little different on the rear IO, such as dual HDMI + VGA, but here MSI have decided to remain a little basic.  From left to right we have a VGA, HDMI, a Realtek 8111E GbE NIC, two USB 3.0 ports, a ClearCMOS button, optical S/PDIF output, a combination PS/2 port, a WiFi connection, four USB 2.0 ports, an eSATA port, a Bluetooth 3.0+HS module and a trio of audio jacks.

As mentioned in the visual inspection above, there are no real extras in terms of the MSI board – we arguably get the minimum we expect from a mITX product at this price range.  There is perhaps scope to bump up the audio/Ethernet controllers to ALC898/8111F, or organise the layout to include more SATA ports onboard.