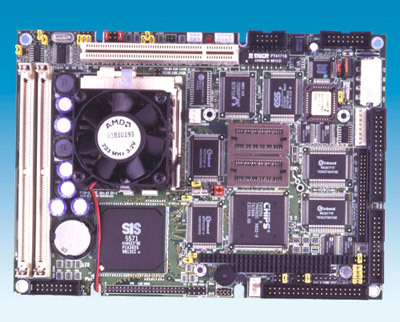 If you remember, the 5571 chipset was the heart of the MTech R534F Mustang motherboard which was at one time, the most attractive motherboard to run a Cyrix 6x86 processor on.

MTech's Mustang based on the 5571 Chipset

The beauty of the 5571 chipset was that it was a highly integrated, single-chip solution, meaning that Advantec could conserve quite a bit of PCB space by using the 5571.  The board featured 2 72-pin SIMM slots, with no reason for SDRAM, the 2 72-pin SIMM slots made perfect sense for applications such as the MP3 Mobile.

The on-board parallel port was used to drive a 16-character Vacuum Fluorescent Display (VFD) that basically displayed the artist and song title read from the ID3 tag of the MP3 being played.

The 5682E board also featured an integrated ESS-1868 16-bit audio processor that drove the two outputs on the MP3 Mobile.

Naturally the MP3 Mobile was nothing more than a home project, its looks were far from commercial and mass producing such a crude design wouldn’t be too realistic.  But it did get the job done, it generated enough attention to convince Hugo that a commercial version was definitely needed.  And in August of 1999, the first product of Hugo’s company, empeg, was released and dubbed the empeg car Mark I.