While most of the attention this previous week has been focused on Apple's A5X SoC inside the iPad (3rd Gen), the other Apple-SoC news is that of the S5L8942 or A5 revision 2 inside the Apple TV 3, and iPad2,4. In the case of the Apple TV 3, this A5 consists of a single core ARM Cortex A9, and likely the same PowerVR SGX543 GPU, though Apple hasn't stated how many GPU cores are enabled on this particular variant. We originally speculated that this might be a harvested die with an ARM core or SGX 543 core disabled, and until someone X-rays the package it's hard to know for sure. At this point we also don't know anything about what clocks the A5R2 inside Apple TV 3 is running.

In an attempt to figure this out, I decided to disassemble the Apple TV 3 I purchased to see what's different. Taking the Apple TV 3 apart is the same procedure as the last model. The bottom rubberized plastic cup pops off easily enough with a spudger, then there are some Torx bits securing a metal heatspreader to the PCB. Remove this, disconnect the power supply, and you're basically done. Interestingly enough, nearly every package and EMI can has a thermal pad on top and bottom in the Apple TV 3. I haven't found that the new revision gets warm at all (in fact, just like the previous revision it barely gets warm to the touch), but clearly thermals were a consideration here. 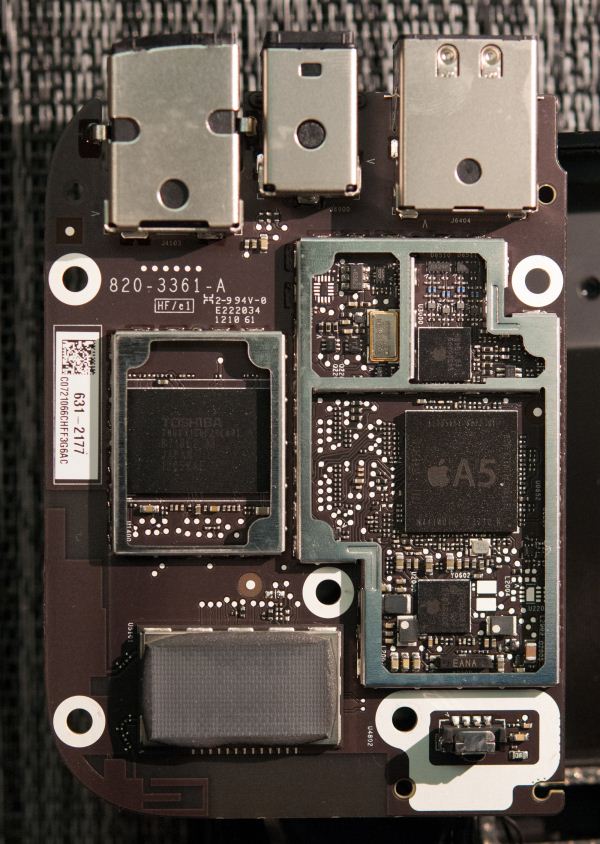 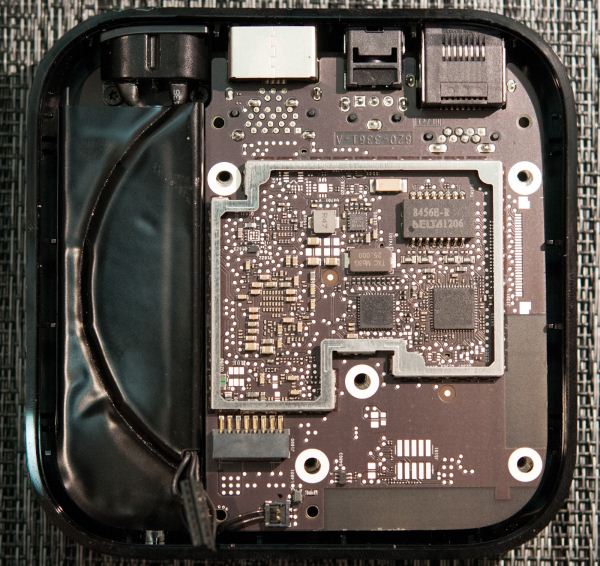 Inside the Apple TV 3 things are arranged the same way as the previous model, with one big PCB sitting next to the power supply. With the EMI cans off, you can see that the second unused NAND pads and area have been removed, and in its place is one Toshiba 8 GB NAND device. To the left of it is the device's WLAN + BT 4.0 combo device, whose EMI cans are soldered on. iFixit has since disassembled an Apple TV 3 as well, and found BCM4330 inside, a choice which isn't surprising at all considering Apple's affinity for Broadcom combo chips. Note that there are two RF chains coming from the device, and two antennas, as opposed to the Apple TV 2's one.

If you've had to stare at the A5 in the iPad 2 or iPhone 4S as much as I have, what should strike you immediately is that its aspect ratio is changed - it's more square than the A5 we've seen before. I measured this package and found that aspect ratio change to be the case. Interestingly enough the A5 in Apple TV 3 is slightly smaller than the iPad 2 / iPhone 4S A5, at 13.02 mm x 14.02 mm. This is as opposed to a package size of 16.7 x 14.3 mm for the A5 we've seen before. Package size alone isn't enough to draw conclusions from about whether this is an entirely new design - it's entirely possible that Apple has simply removed unused pads/balls and repackaged the A5. 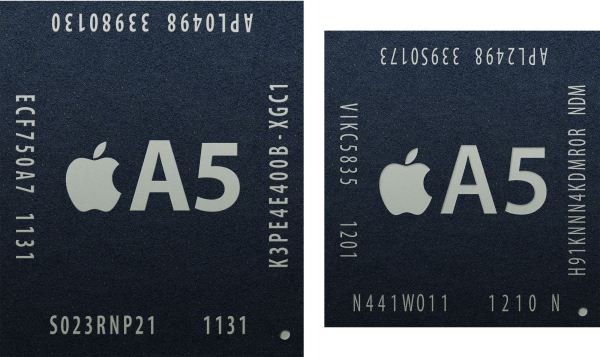 One of our readers put together photos of the new A5 based on our package photo (and also put together awesome images of the A4 and A5) for Wikipedia, which really illustrates just how changed the aspect ratio is. I put together a to-scale side by side with the two A5 packages above.

The reverse side of the PCB is less interesting. Here we see the SMSC9730 HSIC USB 2.0 to 10/100 Ethernet controller, Delta Electronics magnetics for the Ethernet jack, and another package whose markings I couldn't make out but seems to have been present on Apple TV 2. There's also the same 30-pin dock port pads in the same place.

Finally, the Apple TV 3 contains the same 3.4V, 1.75A (~6 W) power supply as the previous model. In actual use, I've never seen either the Apple TV 2 or 3 use more than 3 watts while decoding 720p or 1080p video. The corresponding bump in output resolution, SoC, and WLAN stack doesn't seem to have changed power draw at all, or at least not enough that I can measure it on the Kill-A-Watt P4460 which only reports down to 1 watt of precision.